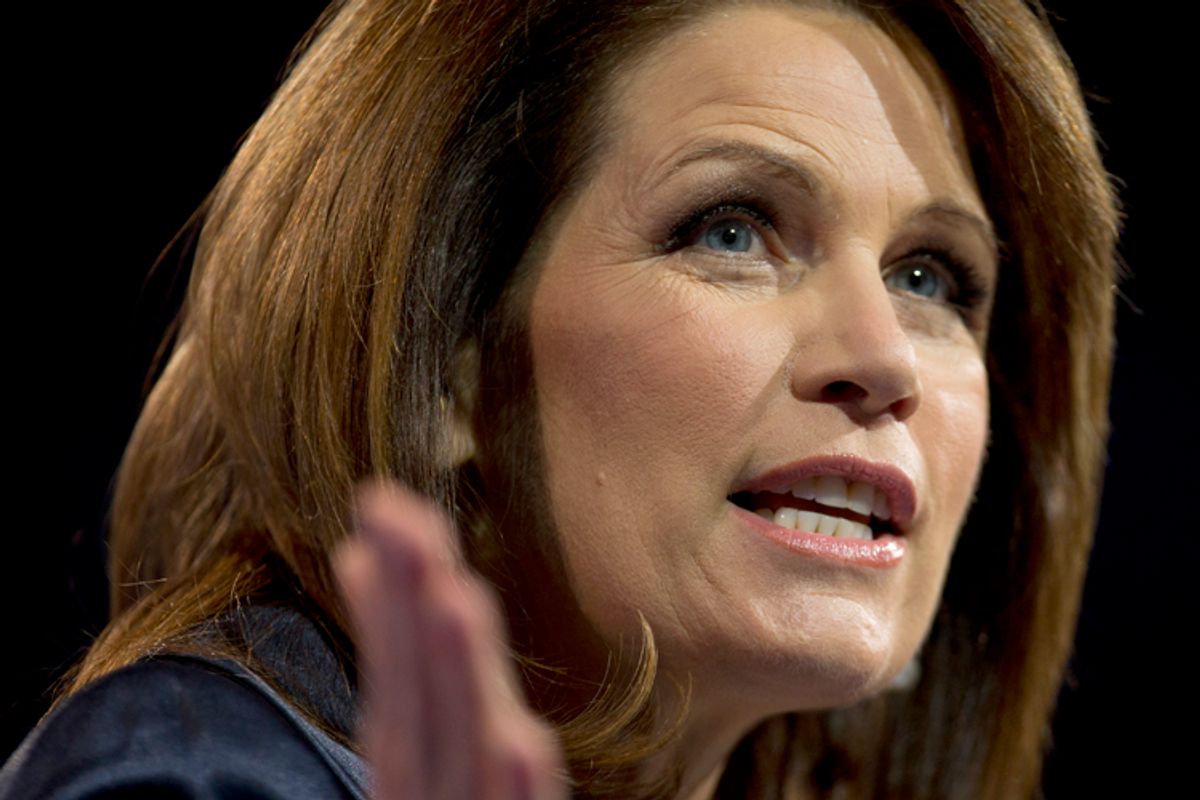 Sure, there was plenty of tomfoolery and dickishness on display over at CPAC this week—what with Trump’s immigrants-are-coming-to-steal-jobs remark and Paul Ryan claiming poor parents don’t love their kids. But asinine comments were made elsewhere in the right-wing lunasphere. Some doozies:

1. Fox Business commentator’s advice on the poor: “Stop being poor.”

The Daily Show’s Aasif Mandvi may have found the greatest jackass of them all recently when he interviewed Fox Business commentator Todd Wilemon. The subject was healthcare and the oft-repeated, totally erroneous claim that the U.S. has “the greatest healthcare system in the world.” This assertion should only be made with the addendum: "if you can afford it." In fact, the U.S. ranks 37th in the world for healthcare, so,yes we're in the top 40, and hooray, we're ahead of Slovenia. Take that, Slovenia! It’s gotten to the point where international relief doctors who usually helicopter supplies into war-torn, impoverished countries and refugee camps are now starting to fly those supplies into places like Knoxville, Tennessee.

But have no fear. Wilemon had a great solution for these people who just “want a free lunch,” and who “refuse to pay.” When Mandvi pointed out that they are not "refusing to pay," but just aren'table to afford healthcare because they are poor, Wilemon said, “If you’re poor, just stop being poor.”

Great idea! Why didn't we think of that?!

2. Megyn Kelly scoffs at atheist’s claim that the cross is a religious symbol.

Somebody was not paying proper attention in Sunday school, and has been very, very naughty. We’re talking to you, Megyn.

There is a steel beam cross in the center of the World Trade Center memorial. It was found in the wreckage and seen as a miracle by some Christians. The activist group American Atheists are suing to have the cross removed, claiming that as an inherently religious symbol, it has no place in a publicly funded monument. They point out that people of multiple faiths, and even those without faith at all, died in the disaster.

“The cross is Christian," said David Silverman of the American Atheists during his appearance on the Kelly Files. "It was installed in a religious service on consecrated ground, which makes it a working shrine on public land in the World Trade Center, and we think the atheists who also died on 9/11, and the Muslims and the Jews, should all have their equal presence,”

Nope, Megyn Kelly said. The cross is not religious. It's just a historical artifact. Nothing Christian about it. Tough luck, atheists, Jews and Muslims.

Got it, the cross is not Christian. Next week: the Bible, not a book.

3. Josh Miller, Obamacare hypocrite: 'I got mine, so bite me!'

Another prime cut of jackass raised its braying head this week in the person of State Representative Josh Miller of Arkansas. Such a man might, at first glance, inspire some sympathy. He was paralyzed in a car accident, and he was uninsured at the time. Fortunately for him, his medical treatment was paid for by personal assistance coverage from Medicaid. Naturally, an experience like that would really convince someone of the value of Medicaid and healthcare for all. Wait, what? No?

Astonishingly, Miller voted against the expansion of Medicaid, which would have given poor people in his state the same coverage he recieved in his hour of need. In an interview with theArkansas Times, he explained why. "My problem is two things," Miller said. "One, we are giving it to able-bodied folks who can work ... and two, how do we pay for it?"

Of course, he knows that really isn’t a question since the federal government has offered to pay for Medicaid expansion under Obamacare. Translation: It would be free money for Arkansans who might get hurt or sick while uninsured.

In a conversation Monday with Family Research Council head Tony Perkins, that zany Minnesota Rep. Michele Bachmann chastised American Jews for voting for Obama, She warned them that Obama is “threatening Israel,” and also that he is kind of the anti-Christ, fulfilling biblical prophecies and bringing about the End Times.

Blame it on the Jews, what a novel idea!

The Minnesota congresswoman told Perkins that President Obama is pressuring Israel to “give up its land to terrorists,” who are, of course, allied with Al Qaeda. This is what is going to trigger the end of the world, or as Bachmann described it, the “final war, destroying and reducing to rubble Israel.”

Here are more of her insane and fairly incoherent ramblings:

“That’s in the natural, I just believe that as believers in Jesus Christ who see the authority of scripture, I believe that the Lord and his strong right arm will have Israel’s back and will be her protector. The question is, will we as the United States cooperate in standing with Israel and blessing Israel, or will we join those nations that come against her? We are definitely on the wrong side. It is jaw-dropping, it is stunning, it’s breathtaking.”

Fortunately, she was able to retrieve her breath and scrape her jaw off the floor, so that she could scold the American Jewish community for its wide support for Obama.

What is reassuring, in a way, is that all of this was predicted in the Bible. As Bachmann reads it: “The nations of the world will come against Israel and the scripture very specifically says all nations, now for the United States we don’t have that experience until recently under President Obama with the United States not standing with Israel.”

5. Conservative leader thinking he was off-mic: “Jews are the problem.”

Turns out you both feel that Jews are a problem.

Boykin has other nutty ideas, like a theory that President Barack Obama is using “subliminal messages” to signal support for Al Qaeda and the Muslim Brotherhood. There is audio to this effect posted by the Southern Poverty Law Center (SPLC) on Friday.

“If you understand anything about Islam, there are subliminal messages,” Boykin says. “[Obama's] message, really, I believe was, ‘I understand you, and I support you.’”

Sounds like a thoroughly reasonable man. So reasonable in fact that CPAC won’t even allow him to participate. CPAC! — which featured such bright lights as Donald Trump rambling incoherently and Sarah Palin doing what she does best, making no sense.

Oh. Hahahahahahaha.They must have had a good belly laugh.  The Jews love that kind of humor...

6. James Bowman: 'There must be some happy stories about slavery.'

What the hell is wrong with these people? You really have to wonder about the small (hopefully) subset of white people/commentators/bloviators who keep insisting that some slaves really enjoyed their captivity. Bad enough that people made this argument during the time of slavery, in order to perpetuate it, but we’re talking about TODAY!

James Bowman, cultural critic at the American Spectator, joined the ranks of the idiots of “Duck Dynasty” when he complained that there weren’t any positive stories about slave masters in 12 Years a Slave.

His words: “If ever in slavery’s 250-year history in North America there were a kind master or a contented slave, as in the nature of things there must have been, here and there, we may be sure that Mr. McQueen does not want us to hear about it.”

Yeah, c'mon guys. Why all the negativity about slavery? You're such Debbie Downers. Why can’t we have happy movies about slavery like Gone With the Wind? Don’t slavery apologists deserve some entertainment, too?

We’re sure Steve McQueen will take it under advisement.

It takes a brave and visionary leader to just say no to science. But in Wyoming, one man, the governor in fact, is taking that brave stand. But he did not do it all alone.

A little background: The Next Generation Science Standards (NGSS) are a new set of education initiatives that have been adopted in 10 states and, like the Common Core State Standards, are designed to make sure students across the country are being held to the same benchmarks. They were developed with input from 26 states; although, not Wyoming.

So when the budgeting process came around for that state, another visionary, Rep. Matt Teeters (R-Lingle) first proposed a budget amendment that stops the state from considering the NGSS. Gov. Matt Mead (R) approved this amendment in his budget Wednesday.

He and Rep.Teeters just don’t want climate change to be taught as established science. ‘Cause that would be bad, you know, for kids to learn the truth.

8. Arkansas judge: Gay sex “just a small step to having sex with a dog.”

Yep, direct quote. In fact, Arkansas state judge Mike Maggio is famous for his pithy quotes, which also include: “Sluts are just whores in training.” Women shouldn’t make an “emotional decision to divorce because the husband stepped out” if he was a “ good provider.” And, whatever you do, don’t go to Disney World during “gay/lesbian week.”

According to ThinkProgress, these lovely homespun homilies from the bench were “uncovered after the Arkansas blog, Blue Hog Report, discovered that a pseudonymous commenter on a message board for Louisiana State University fans was a  sitting Arkansas state Judge Mike Maggio." Judge Maggio, who posted under the username “geauxjudge,” offered questionable views on race, sexuality, women and many other issues.

The comment about sex with dogs arose in a discussion thread about a “Vegas woman arrested for sex with pit bull.” Maggio suggested that “TGGLBS sex”—an apparent reference to “transgender, gay, lesbian or bisexual sex”—is a gateway to copulating with canines.”

He has since acknowledged authorship, and withdrawn from a race for higher office.