Fairway to heaven: What happens to an abandoned golf course

In Myrtle Beach, South Carolina, nature has reclaimed 54-hole Bay Tree. But the land will never be the same 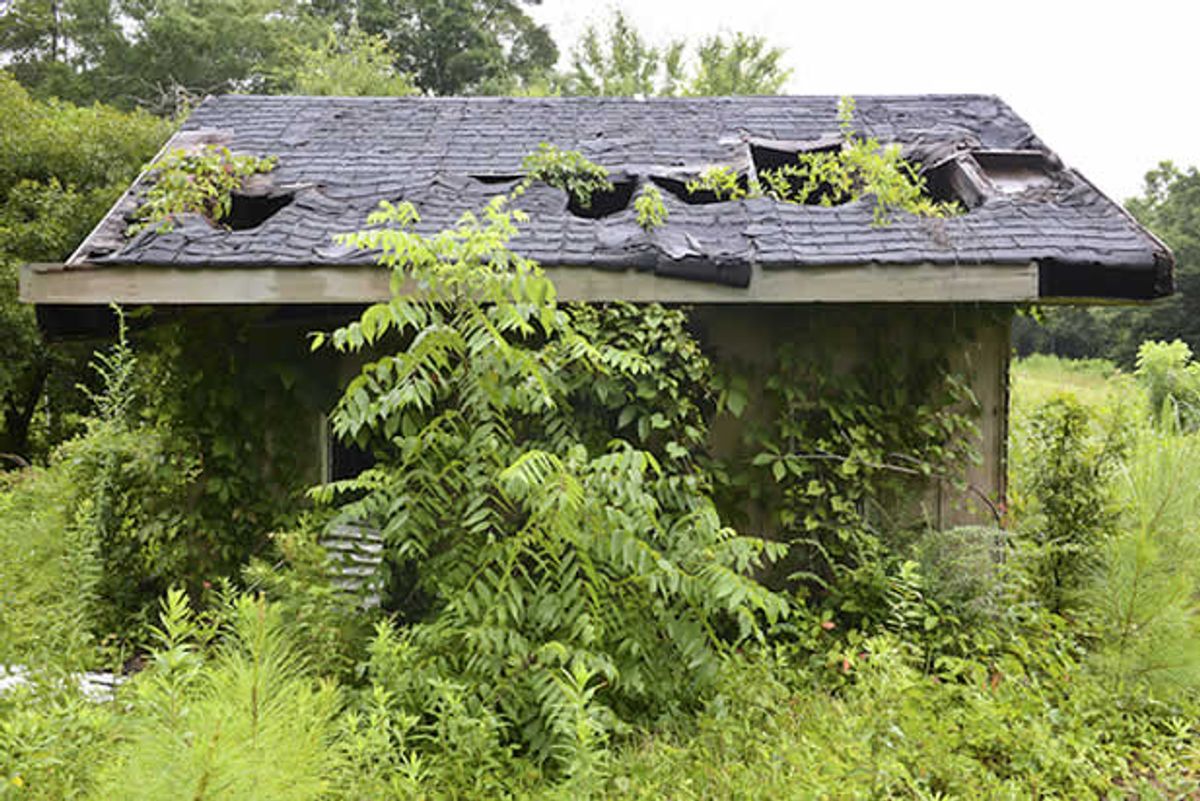 Before we walked on the abandoned golf course, the realtor charged with selling the condos around it told us that our plan was “suicidal.” We would run into copperhead snakes, he said, if not the bikers and meth cookers recently discovered on the property. The warning didn’t entirely displease us, for we didn’t intend to play golf. Photographer Robert Dawson and I had come to Myrtle Beach, South Carolina, one of the country’s top golfing destinations, to walk its derelict golf courses, to see what kinds of life persisted on a course after it died, to find out whether nature reclaimed it. In this contest, we were on nature’s side.

Nature had been on a long losing streak in Myrtle Beach. Although only 28,000 people live there, it looks like the capital of cheesy enterprise, as if strip clubs and cigarette outlets and fireworks stores from across the country had been shaken from their foundations and set down in Myrtle Beach, where they could all be together. Strip malls line the town’s highways like paramecium. They include beachwear shops where three t-shirts sell for ten dollars; a store called “Vices” that sells cigarettes and liquor; jaw-droppingly grandiose miniature golf courses like “Molten Mountain,” which features a smoking, three-story-high hump, around which the course meanders; plus golf clothes stores, golf supply stores, and a golf shoe store. Virtually all the food is fast. Driving through Myrtle Beach felt like looking from a three-dimensional universe into Plato’s two-dimensional cave. We spent three July days exploring the town, and despite the swarming bugs and the blanket of humidity, we felt relief each time we turned off the highway and onto an abandoned course.

Most of the town’s 28,000 citizens are transplanted Northerners, lured there by golf. From the late 1980s to the early 2000s, five new courses opened every year in Myrtle Beach, until it boasted 120 courses – one for every 200 residents. Back then, golf’s popularity was soaring, and the demand for more courses seemed boundless. First the town fed on the sport’s allure, then the housing boom fed on the golf boom. Developers put homes and condos alongside every fairway of every new course, using the locations to boost the homes’ sales prices. The housing mania had so much momentum that when golf’s popularity waned in the second half of the decade, developers simply dropped golf from their equation. They leveled the courses and turned them into more housing tracts. That worked until the housing bubble also burst and real estate prices plummeted. Most of the 22 courses that closed in Myrtle Beach turned into residential developments, but half a dozen weren’t converted in time. Instead, they were abandoned. Those were the courses that interested us.

The natural reclamation of a golf course is not a simple thing. A golf course, after all, may inhabit 150 acres of verdant terrain, but it’s a tamed and highly stylized simulacrum of nature, not nature itself. Golfers seem to think of such landscapes as nature perfected, designed for entertainment and absent messy cycles and seasons, certainly nothing red in tooth and claw. Elaborate sprinkler systems serve up copious amounts of water. Insecticides, herbicides, and fertilizers are applied liberally to make greens and fairways pleasingly iridescent. Trees are carefully positioned in long rows, and lakes are treated with dyes to make them look like tropical atolls; one dye is actually called “Blue Lagoon.” Some televised golf tournaments even dub in fake bird sounds.

The course pulsed with a jungle-like intensity, as if it were making an exuberant transition to nature reserve.

It’s no doubt a good thing that the abandoned courses no longer receive their chemical allotments, but the land won’t return to its pre-European composition. The longleaf pine forests that once dominated the region were cut down centuries ago, and the state’s coastal hydrology has been drastically altered by the installation of more than 14,000 manmade ponds, including hundreds on golf courses. So it’s an open question: Without groundskeepers’ manicured tending, will native species stage comebacks on the courses, or will their degradation attract the sorts of invasive species that thrive in disturbed landscapes? Or, perhaps more to the point: Will the courses’ newfound wildness serve beauty or ugliness?

It was at the first course we visited, Bay Tree, that the realtor issued his sinister warning. He explained that Bay Tree’s descent had been steep. When it opened in 1972, it flaunted its 54 holes, making it the first three-course layout in the country. Unfortunately, from a golfing perspective, the one glaring weakness of Myrtle Beach courses is that they’re relentlessly, tediously flat, and Bay Tree was no exception. In three-and-a-half decades of operation, its two biggest claims to prominence were that it once hosted the final stage of a qualifying tournament for one of the US golf tour’s four “grand slam” events, and that Dan Quayle once played there. I can’t imagine faint praise more damning than that. When the course closed in 2006, homeless people took up residence in its clubhouse, so the clubhouse was torn down a year later.

I spent much of our stroll through Bay Tree trying to decide whether the realtor really meant his warning. True enough, the place was enormously overgrown, forbidding, with a haunted feeling. Its ponds were brown and murky and rimmed with six-foot-high foliage. The hole markers had long since disappeared, but we could still make out fairways by the trees that lined them and tees and greens by the mounds they usually topped. Now that the greens’ once carefully nurtured Bermuda grass had died off, their sand foundation, installed to promote drainage, was exposed: Seeing these brown-gray expanses felt like looking at skeletons. Instead of snakes, or the feral pigs that were chased off the property two years ago, we ran into bunnies, which froze in their tracks as if they thought that made them invisible. Next to the third hole, we found a crumbling bathroom, bathed in spray-painted slogans like “THUG SPOT.” Thugs indeed: Only two weeks earlier police made arrests after finding a meth lab deep in the course’s interior. Bay Tree had become a dystopia.

Two days later, we found its antithesis, Deer Track, as tame as Bay Tree was wild, where someone, presumably the owner, had cut back the vegetation nearly to its pre-abandonment height. The place still looked like a golf course, only more serene, as it lacked golfers.

We were driving through Calabash, North Carolina (considered a part of the Myrtle Beach region despite being across the state line) when we found Marsh Harbour, our Goldilocks golf course – neither too wild nor too tame. We would have missed the course if not for catching sight of a sign announcing it. The sign turned out to be the only well-maintained structure on the premises. We walked past a smaller sign that said “Private Property” and a little farther in, a sign warning of a dog. But we saw no dogs, nor any other four-legged animals. They were there, though, somewhere – we occasionally heard howls. The course pulsed with a jungle-like intensity, as if it had found its true calling, as if it were managing an exuberant transition to nature reserve.

We felt like archeologists. We found red, white, and blue course markers and a faded-green golf ball washer. Outside a shed, we came across a decomposing green-and-yellow John Deere Accumaster 1800, a golf-cart-sized vehicle that once spewed herbicides and pesticides. Its spray pipes, now retracted, looked like insect antennae. Three tires were flat, and the cap on the chemical tank was missing. The sprayer had lost its menace. Now it just seemed like a relic.

Next to the first hole fairway, we spotted a wooden fence with a few slats missing, and realized it didn’t quite enclose a house once intended to look out on the golf course. The housing meltdown must have hit just as it was being built, for it wasn’t completed. A not-yet-installed microwave sat on a kitchen counter. The interior walls still lacked insulation; outside, we found piles of the pink stuff, rotting and merging into the cement deck. A few yards away, we peered into a kidney-shaped swimming pool, half-filled with a lustrous muck as thick as porridge. It felt like we were looking at a collapsed civilization.

A short stroll from the house, we found the Marsh Harbour clubhouse. Even though it was boarded up, it looked soft and luscious, achieving a beauty and dignity it could not possibly have boasted while open. On three of its four sides, broad white staircases led up to it. Lush, leafy foliage, green flecked with red, had inveigled its way though cracks in the steps and had wound around the railings, which were adorned with remnants of yellow “CAUTION” tape that looked like sun-flecked petals. In color and composition, the staircase formed a perfectly balanced tableau, as if this were the manifestation it was intended for. The crumbling clubhouse looked honest, even elegant, while underlining the ephemerality of the golf course it had served. The steps pointed upwards, and the vines climbed up the steps. They suggested a resurrection.

Driving through Myrtle Beach felt like looking from a three-dimensional universe into Plato’s two-dimensional cave.

Jacques Leslie is the author of "The Mark: A War Correspondent's Memoir of Vietnam and Cambodia." He has written for the Atlantic, the New York Times Magazine and Wired, where he's a contributing writer.