We already knew Google and Facebook were resourceful. But their new scheme to rip off the U.S. Treasury is chilling 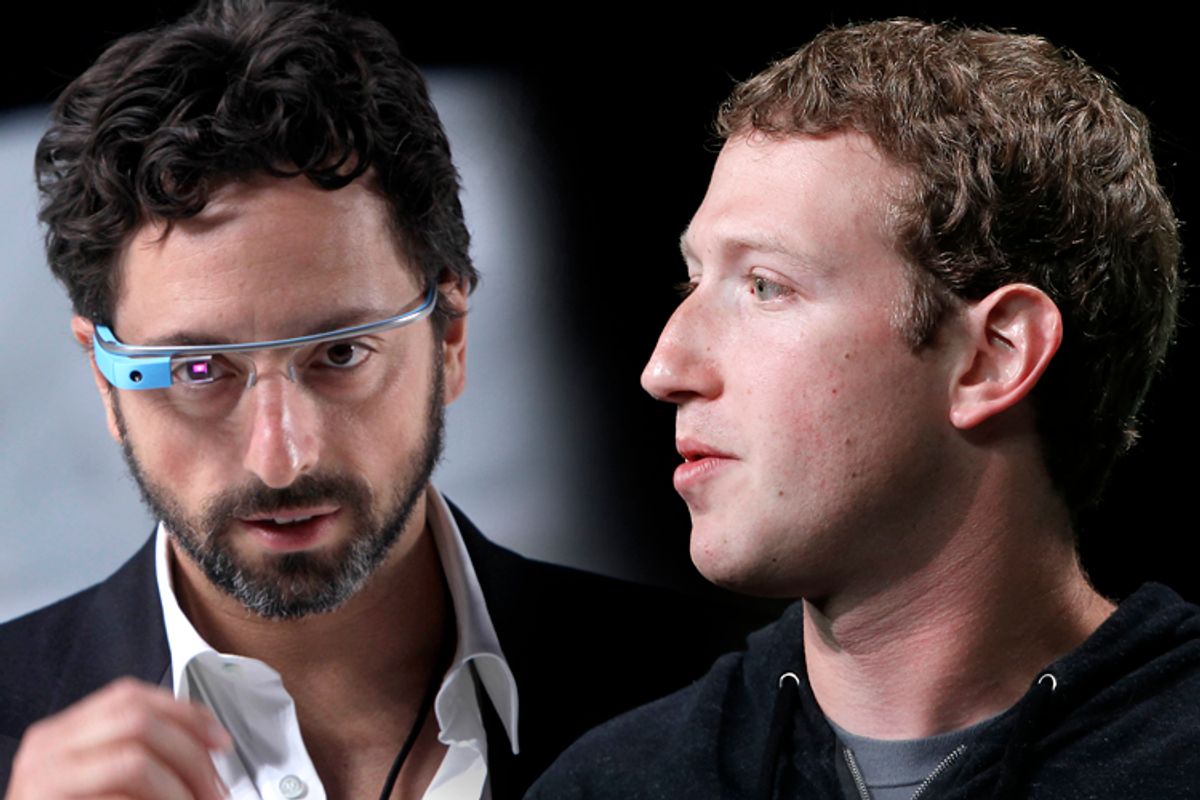 To really understand the extent of Google and Apple’s innovative zeal, you may want to look past their groundbreaking products – and more at their tax avoidance strategies. In a new scheme that defies belief, some of the nation’s top tech giants are managing to evade taxation on money by parking it overseas – and then somehow taking government payments on it.

Though the rest of the business sector had a head start, tech firms have begun to lobby Washington with more persistence over the past few years; the top 10 spent more than $61 million in 2013. The more hopeful among us might believe this shift could possibly produce more beneficial results for the public. (After all, Google’s motto is “don’t be evil,” right?)

But while it’s true that, in certain discrete areas, tech lobbying has yielded positive results -- like when companies aided grass-roots efforts to stop Internet censorship legislation sought by Hollywood -- in the vast majority of cases, Silicon Valley wants what the rest of our multinational conglomerates want: low taxes and cheap labor. And they’ve been at the forefront of efforts to ensure that.

Take a look at the recent Bloomberg report on companies stockpiling cash in offshore tax havens to avoid higher U.S. rates, for example. (Though the new FiveThirtyEight.com downplayed the significance of this buildup, in actuality it has increased at a fairly steady 10-15 percent rate since the start of the Great Recession.) The tech sector has led the way on this, moving their patents and other intellectual property to low-tax countries to give the appearance that their profits have been earned offshore.

According to Securities and Exchange Commission filings, Apple, Microsoft and IBM accelerated their overseas profit hoarding in 2013 more than their counterparts, adding $37.5 billion to the pile. Over the past three years, Microsoft’s cash stash has more than doubled, and Apple’s has quadrupled. In all, seven tech companies – the three mentioned above, along with Cisco Systems, Oracle, Google and Hewlett-Packard – have $341.3 billion sitting in offshore accounts. At current tax rates, the companies would have to pay $119.45 billion of that to the IRS if they repatriated it. Much of this money is held in segregated U.S. bank accounts, solely for the purpose of avoiding taxes by nominally keeping it offshore.

Sure enough, tech firms are among the companies lobbying for a repatriation tax holiday, which would allow them to return that money home at ultra-low rates. The LIFT Coalition (short for Let’s Invest for Tomorrow), run by former Obama administration communications director Anita Dunn, advocates for the repatriation holiday, and includes Intel, Cisco, Hewlett-Packard, the Semiconductor Industry Association, and “TechNet,” a separate lobbying coalition that counts as its members Google and Facebook.

These lobbying coalitions claim that repatriating the money will allow companies to invest and spur economic recovery, although the last repatriation tax holiday, in 2004, did nothing of the sort. The top 15 companies that made use of that holiday to move money home actually cut 20,000 jobs in the aftermath, while increasing their executive compensation and stock buybacks, according to a report from the Senate Permanent Subcommittee on Investigations (Hewlett-Packard and IBM were among the 15 companies benefiting the most). Sadly, both the recent Republican tax reform proposal and the Obama administration’s budget call for a repatriation tax holiday along the lines of the lobbying coalition’s wishes, so their efforts could bear fruit.

But it’s actually worse than all this. A report from the Bureau on Investigative Journalism shows that these tech firms are actually taking government payments on the money they have parked overseas to avoid taxation. That’s because that money isn’t sitting under a mattress somewhere in Bermuda or the Cayman Islands; it’s invested, and the No. 1 investment these firms use is the ultra-safe, ultra-liquid instrument of U.S. government debt.

SEC filings show that Apple, Microsoft, Google and Cisco have $163 billion invested in various forms of interest-bearing U.S. debt. If they were a country (Silicon Valleyistan), that would be the 14th-largest holding of our debt in the world, more than the sovereign wealth funds of Singapore and Norway. Despite the investments in things like Treasury notes and agency debt, the money is still considered offshore, avoiding taxation even as it collects interest from the U.S. government. The annual interest payout to just these four firms is $326 million.

Silicon Valley has mobilized to ensure this gravy train continues into perpetuity. Though the G-20 group of countries has discussed a unified effort to close international tax loopholes, a lobbying coalition made up of tech firms called the Digital Economy Group has fought them almost single-handedly. In a letter to the Organization for Economic Co-operation and Development, the DEG argued that any tax avoidance is “purely coincidental,” adding that “enterprises that employ digital communications models do not organize their business operations differently as a legal or tax matter.” This is completely absurd, given the facts, and represents a hidden effort to subvert tax reform while publicly endorsing the concept.

The fight for low taxes almost looks good compared to Silicon Valley’s securing of cheap labor, the nasty details of which have spilled out in a federal lawsuit. Google, Apple, Intel, Adobe and several other tech firms were charged with colluding to artificially keep down labor costs among engineers and other workers. Basically, companies made illicit agreements not to poach each other’s employees, which eliminates labor competition and suppresses wages. This violates federal anti-trust laws, the workers alleged. Emails between the likes of Google’s Eric Schmidt and the late Apple CEO Steve Jobs provided the evidence for the allegations. The companies even shared salary data for their employees to ensure that nobody overpaid. Recruiters who called into other Silicon Valley firms searching for talent were summarily fired.

Some tech giants, like Intuit, settled with workers for an undisclosed sum, but Google and Apple tried to get the class action suit thrown out of court. A district court judge and the 9th Circuit Court of Appeals dismissed that attempt, however, letting 60,000 workers continue to pursue the case. The trial is slated for this May.

None of this is particularly surprising. Tech firms are in the business of making money, regardless of the shiny products and Web apps and social media diversions that supply their revenue stream. They cut all the corners that the rest of corporate America cuts to maximize their profits, skirting the edges of the law and sometimes going over it. You may not want to believe that the companies that give you the iPad and help you in your search for cat videos operate like a two-bit hustler, stealing the wages of employees and setting up dummy tax shelters. But that’s the sad reality.