The key to the Democrats' strategy: Koch financial and political interests have unpopular ramifications everywhere 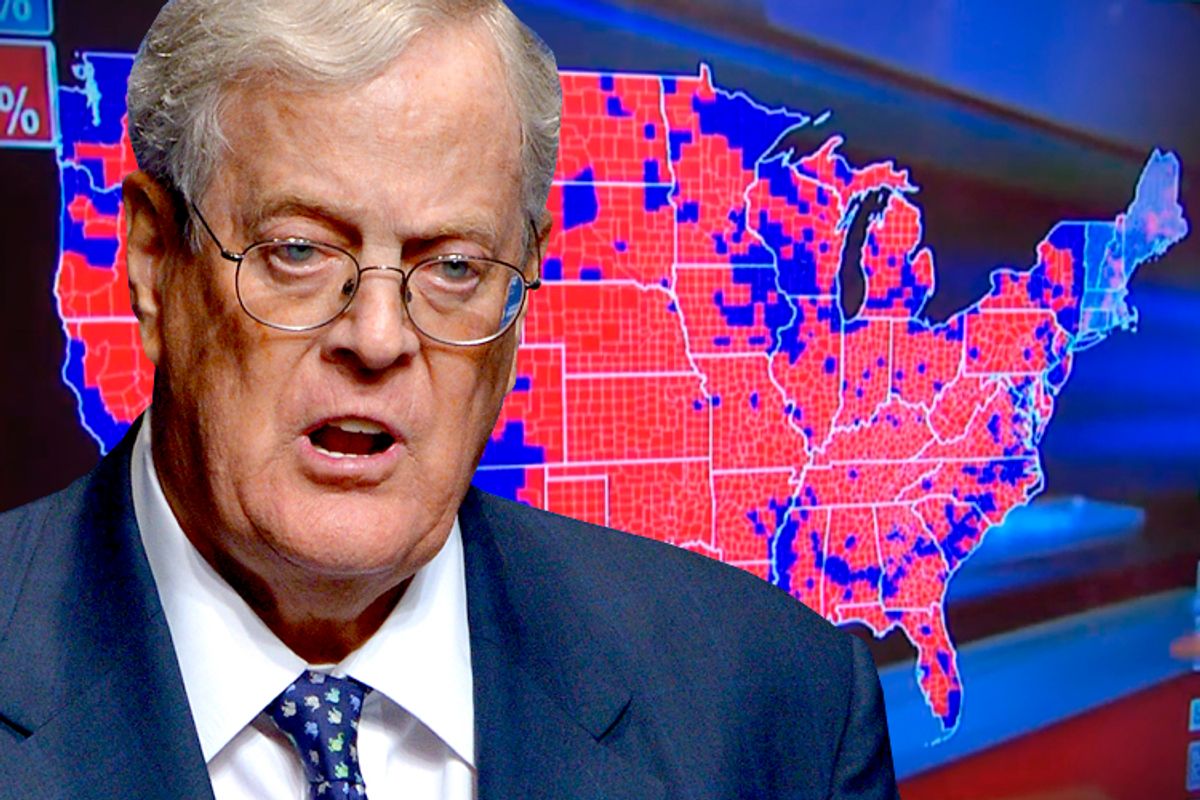 A couple of weeks ago, Democrats all of a sudden and in unison began setting up the billionaire Koch brothers as their ideological foils, without offering up much in the way of an explanation.

“They are a rallying cry for the Democratic base heading into the midterm election and a touchstone for independent voters who are looking at who is funding you as a reflection of where you are standing on the issues,” a Democratic Party operative told BuzzFeed.

That's not exactly a strategy memo. And in the absence of an internally consistent argument for what, by all appearances, were a series of non sequiturs on the Senate floor, political junkies looked at the surrounding context and concluded Harry Reid's Koch tirades were clumsy attempts to change the subject. President Obama's approval ratings aren't very good, Democrats' signature legislative accomplishment isn't very popular, and so an abrupt, coordinated, largely unexplained decision to hammer a couple of influential but faceless conservative influence peddlers must be, by and large, an attempt to distract attention from their own liabilities.

That was surely part of the story, but only an ancillary one. There's much more going on here than an evasive ad hominem fallacy. Two related qualities make the Kochs unique among megadonors to either party: the intensity of their activism, and the breadth of their financial interests. They have increased their fortunes, and advanced their ideological beliefs, with remarkable efficacy, but precisely because their reach is so great they have littered the political terrain in state after state with live ammunition, which will now be aimed at their political beneficiaries.

Writing at the Washington Post a couple of weeks back, Greg Sargent explained why there's more going on here "than an effort to tar Republican candidates with faceless plutocrats."

Dems hope to focus voters on … actual positions by painting candidates as beholden to an agenda held by outside interests. The Koch brothers are a proxy for special interests in general, an easy-to-understand concept designed to create a narrative framework within which voters might reach the general conclusion that GOP candidates’ priorities aren’t in their states’ interests; they are serving something — or someone — else.

This is similar to the Dems’ Bain strategy of 2012.

And it gets us halfway there. What Sargent says is true, but the strategy as he explained it would fall apart if you replaced the Kochs with just about any other donor. There are a lot of special interests and wealthy individuals who seek to influence politics, but you couldn't just swap out the Kochs for a random hedge fund guy or a big oil company and run the same play. The Democrats on the ballot in these elections need to be able to connect their foils with something meaningful to voters in their states. That's hard to do in multiple states with a random Silicon Valley donor who wants laxer immigration laws, or a banker who wants lower taxes or laxer financial regulation. You need someone, or some people, whose tendrils are everywhere. And this is why the Kochs' activism and the industrial reach -- the things that make them sui generis -- are crucial to the strategy.

Sargent cites the case of the Republican Senate candidate in Arkansas, Rep. Tom Cotton, who was the only member of the state's GOP-heavy congressional delegation to vote against the farm bill that the Kochs' advocacy arm also opposed. But you can pick just about any swing state in cycle this year and find something near and dear to the Kochs' activism or business interests that will allow Dems to flesh out the connection between the industrialists and GOP candidates.

In Michigan it's the dumping of unsightly and potentially toxic mounds of petroleum coke along the Detroit riverfront.

"At two campaign stops last week, [Dem Senate candidate Gary] Peters touted his work to bar an industrial facility from storing large mounds of so-called petroleum coke — a coal-like substance that’s a byproduct of Canadian tar sands oil — near the Detroit River," Politico reported in February. "The facility, Peters pointed out, was owned by a subsidiary of Koch Industries — the same Kochs going after him on the airwaves."

In Alaska, a Koch subsidiary closed a refinery, which cost 90 people their jobs, and then tried to pass the costs of cleaning up groundwater contaminated by that refinery along to the state.

The GOP's North Carolina Senate candidate, Thom Tillis, is speaker of the unpopular state House of Representatives, which more than any other state has been a laboratory for the brothers' policy agenda. And so on.

I think it's safe to say that no other individual donor of any political persuasion has a profile -- combining ideological and financial interests -- that reaches down quite this far.

The link between GOP candidates and a private sector villain is less direct in 2014 than it was in 2012 when Mitt Romney sat atop the ticket. But even though the two strategies are intended to serve the same basic end, the 2014 incarnation arguably has more logical integrity to it than the Bain attacks did. The connections between Romney and Bain's most egregious practices were at times tenuous, and in most cases reflected decisions Bain had made to increase profits outside the realm of politics. The Koch brothers have that baggage, too, but they also fund and operate a vast lobbying and advocacy network. Republican candidates indirectly derive huge financial benefits from that network. But with the good comes the bad, and unfortunately for those candidates, their biggest benefactors aren't just seeking predictable rents. They're promoting an extremely broad and unpopular policy agenda. Which means Republicans will either have to disavow their proxy funders or own the fact that they largely share the same agenda.