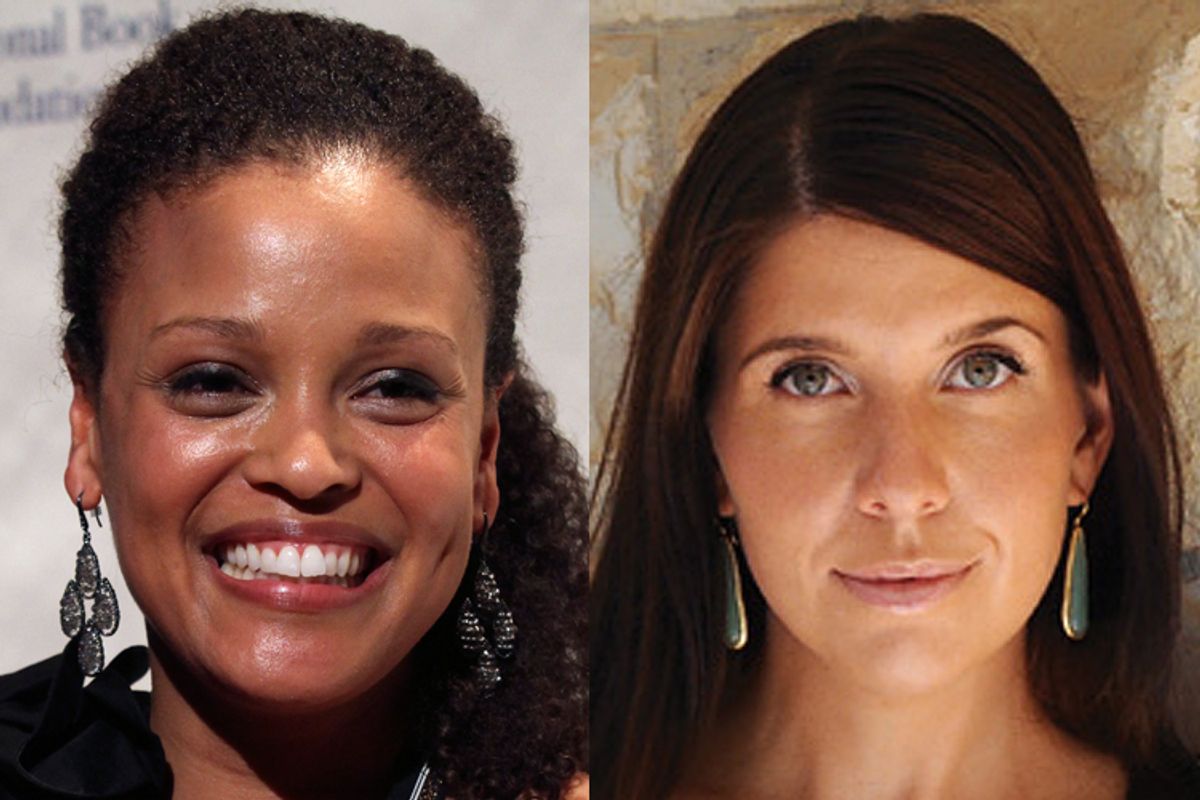 At every turn, Molly Antopol’s gorgeous debut story collection, "The UnAmericans," is firing on multiple cylinders. The book, an unflinching exploration of how one remains human in the face of crushing inhumanity, invites readers into key periods in history even as it details the small-but-devastating shifts these geopolitical moments impose on individuals, families and relationships. These epic stories are masterfully written and fully realized — each one so full of heartache and humor, love and life it feels as though we’re absorbing a novel’s worth of insight.

"The UnAmericans" is a compassionate and brilliantly rendered debut — and for a book set largely in the past, these stories feel essential to understanding the contemporary world in which we live. They span generations and continents, and the characters — young and old, male and female, Israeli, Ukrainian, Czech, Russian and American — all share a common humanity as they struggle to make sense of the tumultuous times they live in. And in highlighting this vital commonality, "The UnAmericans" reminds readers why short stories remain such a vital form: They allow wise writers like my friend to shine a light beyond themselves and onto many different people, places and time periods. And in doing so, the stories take flight, transcending time and place and fluttering into the realm of the universal.

Molly Antopol and I corresponded over email about her drafting process, her complicated relationship to the Internet and her love of James Baldwin.

How did you know you were writing stories and not novels? I’m asking because as I read your book, I was struck by how rich each story felt, how each seemed to work as a little novel. And not just because of their length, but because you take your time developing your characters, giving each a detailed back story, and place each firmly within distinct historical and political periods. Was this “big-ness” of the stories something you were aware of when you were writing them?

When I first started writing, as an undergraduate at U.C. Santa Cruz, all of the models I read were these spare, single-scene stories where everything takes place in line at a grocery store, or in the cab of a truck. All scene, no back story or exposition. Those are some of my favorite stories, some of the ones I admire the most and learned a tremendous amount from, but my attempts at them were terrible — they went against what came naturally to me.

The truth is that I love back story, I love the moment after a scene when there’s a space break and I get to learn all the dirt on the characters. I can’t imagine writing a story in which I didn’t know what my narrator’s parents did for a living, and their parents, and where the family originally came from, and so on. All of that history seems so essential to me in creating characters — it informs who they are on such a deep level.

I always tell my students to seek out other writers as models, and though it took me years to heed my own advice, it really was life-altering when I found writers who wrote long stories, full of back story and side plots and sub-histories. Deborah Eisenberg, Edward P. Jones, Alice Munro, Edith Pearlman, Jhumpa Lahiri, in her most recent collection, "Unaccustomed Earth" — everything changed for me when I read those writers. One of the things I admire about longer stories is the way writers can work with dead time and slower, more idle moments — not only can they feel expansive, they feel lived-in; the unhurried pacing often makes the endings even more resonant and surprising for me.

So often in debut collections, writers seem to be “writing what they know.” The stories are often linked by a common place, voice or cast of characters. One of the things that impressed me most about this book was how it spanned continents and generations, and you managed to write so convincingly from a variety of points of view. Did you set out to achieve this sort of variety, or did it come as you wrote?

It’s true that my book doesn’t contain any stories about 30-something female short story writers living in San Francisco, but I do feel that it is autobiographical in the sense that it captures what I cared about and obsessed over during the 10 years that I was writing it. I was about halfway done with the book when I realized that all of the stories were in conversation with each other: almost all of them, in some way, looked at the complicated — and sometimes heartbreaking — impact that one person’s desire to fix the world can have on the people closest to them.

One of the main reasons I write fiction is to try to understand what life is like for people other than myself, to try to see the world through my characters’ eyes. I often find that I’m able to understand certain emotional truths about my own life by exploring things from different vantages. And while the stories do traverse the map, the places and time periods I write about are very central to my life. Some of the stories are inspired by my family history, notably their involvement in the Communist Party. I come from a big family of storytellers, and I grew up surrounded by tales of tapped lines and nightly visits from the FBI. In terms of the Eastern Europe stories, my family is originally from there; even as a kid it was the Russian writers I loved most, and I’ve spent a substantial amount of time there myself, traveling and on research grants. And recently, some of my family has moved back there, a decision that fascinates me — visiting my aunt and uncle in Kiev, where they had up and moved, planted the early seeds of one of these stories.

With the Israel stories, I’ve spent my entire adult life going back and forth between there and the U.S. I lived there for years — I used to work for a human rights group, and also in an immigrant absorption center for new immigrants from Chechnya and Russia. And since starting on an academic schedule seven years ago, I’ve spent my summers there. At this point, I feel like I know Israel better than I do many parts of the U.S. — I’d have a much easier time showing you around Tel Aviv than, say, Boston or Chicago. But I first arrived there as a guest, and so even writing about it now, I’m always aware that I’m staring through the glass, and that tension between visitor and native is something I found myself exploring over and over in this book.

I’m always curious about other writers’ routines. What’s yours like? Do you have one?

When I’m teaching, I write in the mornings, before my day gets hectic or stressful — and on the days I don’t teach, I put in full days. I have a terrible addiction to the Internet and will go online to research one tiny detail and immediately fall down the rabbit hole, and three hours later you can find me reading obsessively about something totally unrelated to my book, like the history of the remote control. So I use Mac Freedom software that blocks the Internet, and I keep a notepad beside my laptop so that when I need to research something, I jot it down. Then, after I’ve finished writing for the day, I have this list of things I need to look up, and it becomes a kind of treat to go through it all.

But blocking the Internet is the only real rule I follow. To be honest, I try not to be too precious about my writing routine; I can write at home or in libraries and cafés, and I don’t have a lucky pen or a special desk or anything like that. One of the things I love about writing is the fact that all I need is a laptop. A lot of my book was written on international flights or on trains. There’s something so amazing about being in these suspended spaces of transit, where I’m not even sure what the local time is and am completely alone with my characters—in those places, I’m able to lose track of everything else and get completely swept up in my stories.

Oh, I love that question! I’m a big history nerd, and I read every bit of nonfiction I can find on whatever subject I’m writing about — every one of the stories in my book took me at least a year. And I read a lot of fiction: In addition to the writers I mentioned above, I love Grace Paley, Sergei Dovlatov, Leonard Michaels, Andre Dubus, Doris Lessing, Denis Johnson, Ya’akov Shabti, Ben Okri, Flannery O’Connor … and on and on. James Baldwin is one of the most important writers to me. I get the feeling that with all of his books, it’s as if he needed to write them, that he was more interested in being as emotionally direct as possible than he was in trying to impress the world with his cleverness. And I really admire how angry his writing can be, without ever slipping into meanness. Whenever I’m struggling with my own stories, I reread Baldwin, and tell myself that my only job is to be as honest as I can with the reader.

But that’s all happening when I’m drafting. Once I’ve finished 10 or 12 or 15 drafts and the story feels close and I’m purely in revision mode, I don’t read any nonfiction or fiction — I don’t want any more facts or research to weigh down the story, and with fiction, I worry about another author’s voice being too heavy an influence. So I read poetry: Philip Levine, Jean Valentine, Louise Glück. I love that stage of writing: The shape of the story finally feels set in place and I’m thinking purely on a language level. These poets help me with compression — and also, now that the piece is structured, how to think less chronologically and more in terms of emotional time and memory patterns, which feels truer to life. This is the most satisfying part of the writing process for me: when, for a couple of months, I sit down every day and work through each sentence, over and over, making sure every word is doing enough work to remain in the story.

Something else that really stood out to me in these stories was the role that community plays, whether in a communist enclave in Los Angeles or a collective farm in Israel, a partisan brigade in Belarus or an underground newspaper in Prague. And with all of your characters, there’s a feeling that they’re — consciously or not — searching out community to save themselves from loneliness.

When I was a little kid, it was just my mother and me. Maybe because of that, I’ve always had a lot of very close individual friendships but felt lost and crowded whenever I was part of a big, organized group; it’s as if one side of me craves community and the other bucks against it. This chasm grew even wider when writing became more central to my life. Of course I want to support my friends and family during their worst times and to celebrate with them during the best. But when something hard is happening with me, as much comfort as I get from the people closest to me, I find equal solace being alone in a room, finding ways to make sense of — and sometimes even control — the most painful parts of life through writing.