No, we shouldn't #CancelColbert 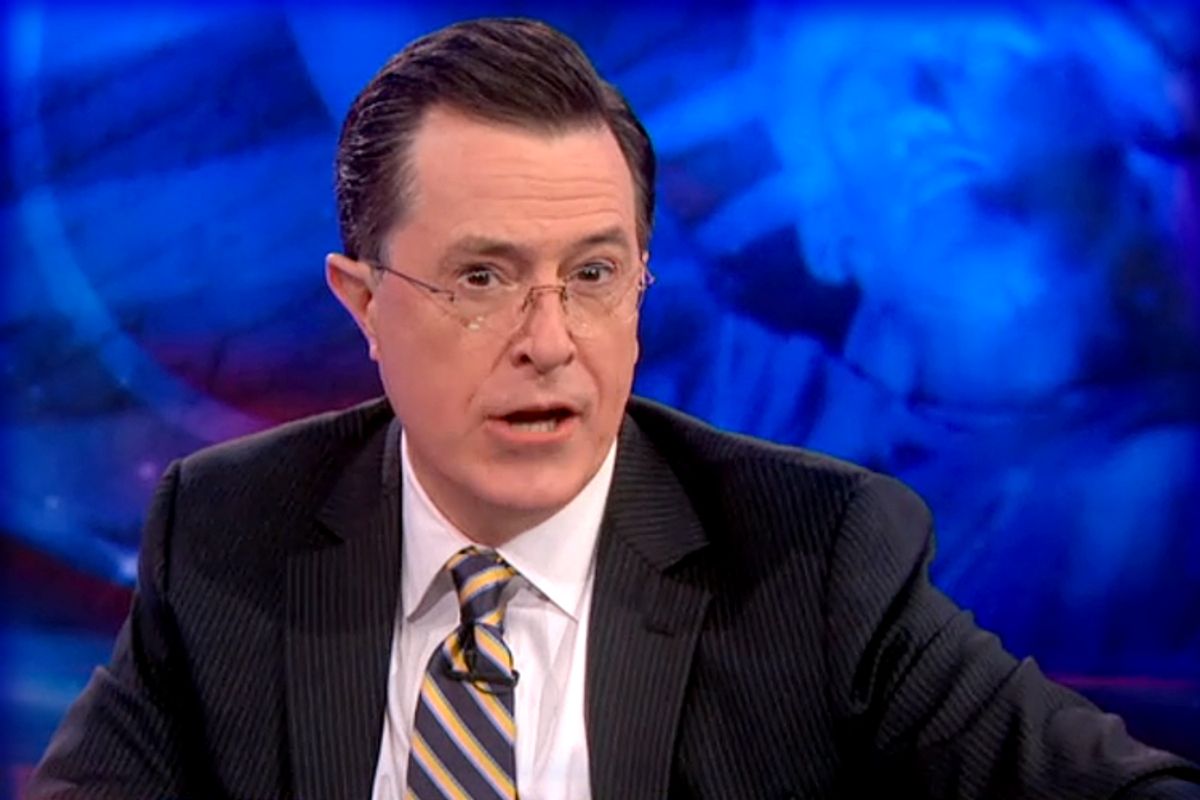 Yes, it was a lame joke. But can we put down the torches and pitchforks?

On Thursday, "The Colbert Report," that Comedy Central satirical institution, found itself embroiled in a surprising controversy – and accusations of racism. In a tweet poking fun at the Washington Redskins owner Dan Snyder's somewhat ironic promise to launch a foundation for Native Americans, the show's official Twitter account sent out the message that "I am willing to show #Asian community I care by introducing the Ching-Chong Ding-Dong Foundation for Sensitivity to Orientals or Whatever." It was a line taken straight from an earlier segment about the Redskins, and a riff on the show's two-year-old mockery of Rush Limbaugh's lengthy, sputtering, entirely genuine baffled imitation of Chinese President Hu Jintao.

Yet without the buffering setup of the show, the joke struck a sour note to many, most notably graduate student Suey Park (who previously spearheaded the Twitter hashtag #NotYourAsianSidekick), who promptly led the charge to #CancelColbert.

The tweet was soon quietly deleted, and Comedy Central quickly issued a statement that "For the record @ColbertReport is not controlled by Stephen Colbert or his show … This is a Comedy Central promotional account, with no oversight from Stephen or his show, that quoted a line out of context." But social media had already lit up on the hashtag, and Park's urging to "#CancelColbert because white liberals are just as complicit in making Asian Americans into punchlines and we aren't amused."

"The Colbert Show's" entire shtick is based on the parody of the right-wing blowhard, and as such it's consistently taken clever jabs at the issues of race in our country. And it's understood that if you want to have a successful, middle-aged white man take on these topics, there's something to be said for dressing him up as a character. Yet as a colleague wisely noted this morning, there is a limit to how much these Caucasian male-dominated venues like "The Colbert Report" and the Onion can get away with on the subject of race. And most of us with any sensitivity whatsoever understand that one person's biting satire is another's insult. The only thing that distinguishes a joke is whether it works or not, and in this case, what got a laugh on TV fell flat on Twitter. It's reasonable to point these things out, and to point them out in the context of how the media represents these issues in general.

But as a full-time, professional offended feminist, I've got to say that we all undercut the serious points we may be trying to make about changing the conversation when the response to something that we deem inappropriate is a full-on demand for somebody's head. Aside from the fact that it's ludicrous to think for a moment that a network is going to cancel an award-winning, successful show because of a poorly executed tweet, it's just plain arrogant to even call for it. It gets attention, and maybe that's the ultimate point, but it also says that if we see something we don't like, we are justified in trying to eradicate it entirely. That's an extreme and intellectually unsophisticated response. Earlier this month, a similar case of misplaced self-righteousness blew up when a University of California at Santa Barbara professor took and allegedly destroyed an abortion protester's sign, telling her, "I may be a thief but you’re a terrorist," and claiming that she'd been "triggered."

You don't like what you see in the world? Speak up about it. Shine a light on it. But don't insist that other people be shut down. That's not how we get things done. Start from the "That's not cool" place and work from there, before going directly to the fight scene in "Anchorman." Meanwhile, Colbert himself, used to playing the whipped up, angry soul, seized upon the controversy in typical fashion. He tweeted Thursday, "#CancelColbert – I agree! Just saw @ColbertReport tweet. I share your rage. Who is that though?"