"Game of Thrones": How Westeros is a right-wing fantasyland

Want to live in Westeros, where there are weapons, massive inequality and violence against women? Just vote GOP 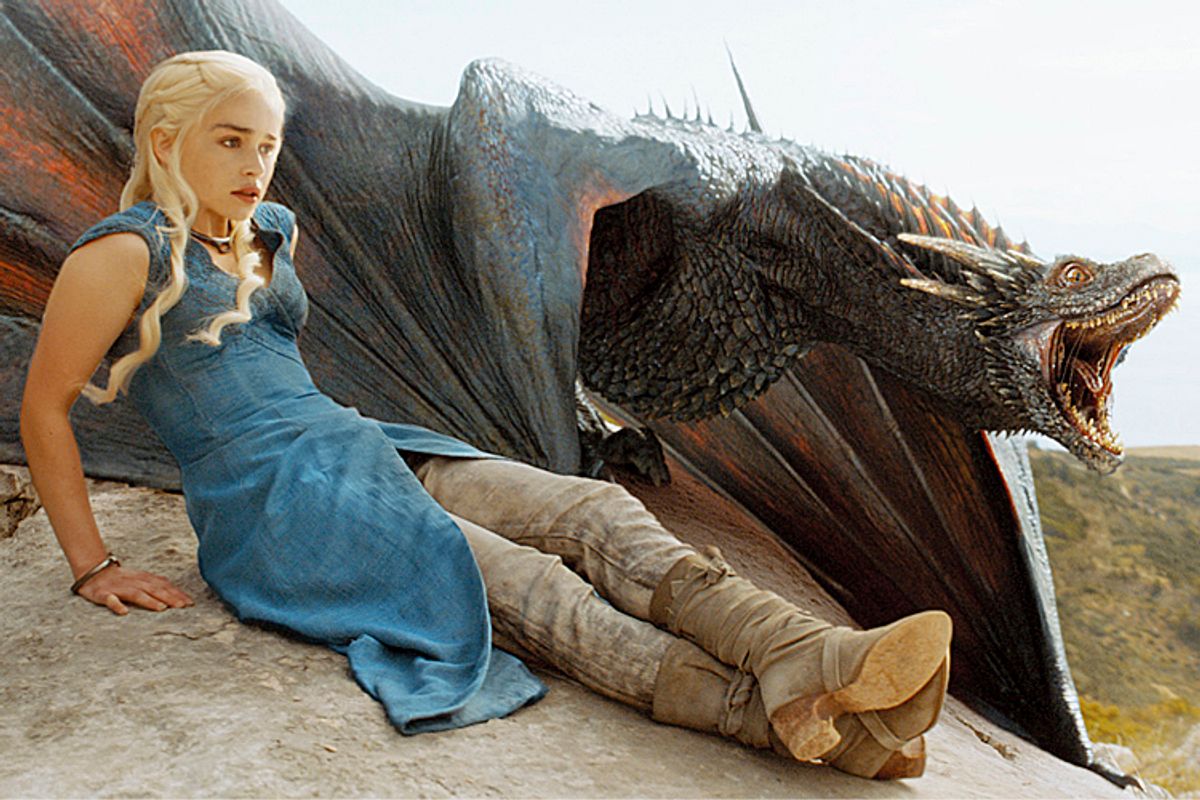 Fans of the HBO hit "Game of Thrones" can finally escape back to George R.R. Martin's world of dragons, swordplay and gratuitous nudity when the show's fourth season kicks off on Sunday. However, the epic tales of war and betrayal are not as big a fantasy as they might appear at first glance. American viewers who want to live in a land just like Westeros have an easy option at their disposal: Just vote Republican. The violent, highly sexualized TV world has a number of disturbing parallels to where GOP policy is steering the country:

Enormous class inequities: "Game of Thrones" follows the stories of lords and knights, but most of the population lives in anonymous poverty, like the wretched masses struggling to survive in the Flea Bottom slum subsisting on “bowls o' brown.” The elite live in opulent luxury, earned through the toil of the working people, most of whom have no hope of escaping their fetid lot.

We aren't far from such a scenario in America, where a few families own most of the wealth while the rest of us are told to be content with jobs at Wal-Mart and McDonald's. We've already seen the top 1 percent double their share of the national income since 1980, from 10 percent to nearly 20 percent, and they've gobbled up almost all the economic growth since the Great Recession. Republican policies that weaken labor laws, cripple unions and keep the minimum wage depressed, all while cutting taxes for the rich, will only hasten our descent into plutocracy.

That said, it is possible to climb up from the bottom for the most talented: Thanks to his immense speed and skill, Bronn rose from nothing to become a hired sword to Lord Tyrion, and Davos Seaworth escaped from Flea Bottom by becoming the smartest smuggler in the land. It's the conservative ideal of pulling oneself up by the bootstraps -- just never mind the struggles of the other 99 percent living in the fields and slums who never make it.

Weapons everywhere: Talk about standing your ground. In war-torn Westeros everybody's armed, and travelers need to be prepared for a fight at all times. Just about every chance encounter on the road results in a swordfight, someone being captured under threat of violence, or both. Blacksmiths must be making a fortune. It's like the NRA's fantasy world.

In the real world, the gun lobby in alliance with the Republican party has managed to quash just about any legislation that would at all restrict gun access, and has passed Stand Your Ground or “shoot first” laws in numerous states, resulting in multiple instances where white men murdered unarmed black teenagers without repercussion. The Republicans give the impression they won't rest until every man, woman and child refuses to leave the house without being armed with a handgun, or maybe an AR-15. Just turn on HBO to see what comes next. Kill, or be killed.

Lawful succession ignored: When King Robert Baratheon died, the law of succession was clear: His brother Stannis was to ascend to the throne. Ned Stark tried to insist that succession be followed, and lost his head for his troubles. Several would-be kings ignored the law in favor of their own ambitions and the result was a civil war in which untold lives were lost. What matters is the acquisition of power, not the means of acquiring it.

In the United States, we ostensibly adhere to free and fair elections, with a standard of one person, one vote. Instead, Republicans do everything in their power to keep people they think will vote Democrat away from the polls. That means trashing the Voting Rights Act and implementing voter suppression laws across the nation, including purging voting rolls, limiting early voting days and requiring voters to present a photo ID before casting a ballot. The law doesn't matter; democratic principles don't matter; all that matters is rigging the vote to get Republicans into office.

Existential threats ignored too: In the show's very first episode, Ned Stark, usually one of the more reasonable characters, ignores reports of ice zombies as he executes a solder for desertion. Never mind that those ice zombies will grow into an existential threat against the kingdom. “The white walkers have been gone for thousands of years,” Stark tells his son afterward. “A madman sees what he sees.”

In the third season, rumors have reached the continent that Daenerys Targaryen is building an army, which includes three dragons. Tywin Lannister, by then the de facto ruler of the continent, dismisses the reports. “Curiosities on the far side of the world are no threat to us,” he preaches.

In that respect he sounds a lot like Republicans in America, who have built up an entire industry around denying climate science and the threat of global warming, claiming that it is a liberal hoax when in fact overwhelming scientific consensus agrees that human activities are heating up the globe.

Pervasive rape and violence against women: When Brienne of Tarth is captured by Locke's band of hunters, he makes it clear that she will be raped by his men for sport and pleasure. She is saved, for the moment, by the timely intervention of Jaime Lannister, though not until after he mocks her, “None of these men have ever been with a noblewomen. You'd be wise not to resist.”

Other women in the show aren't so fortunate. Kal Drogo rapes Daenerys Targaryen repeatedly after their marriage until she learns to take control of the sex act and ultimately falls in love with him (cue Republicans: she really liked it all along). And some of the most horrific displays of cruelty come from King Joffrey, who has two prostitutes beat each other with a stag-horn scepter and later fills one with crossbow arrows.

Gays are demonized: Two gay nobles, Renly Baratheon and Loras Tyrell, are the subject of constant barbs by the other characters. "How good could he [Ser Loras] be? He's been stabbing Renly Baratheon for years, and Renly ain't dead!" a Lannister solder cracks. Even Loras' own aunt refers to him as “A sword-swallower, through and through.”

But gay people in Westeros have more to worry about than insults, as King Joffrey muses that he might implement the death penalty for the “perversion.”

The attitudes of the show's population fit nicely with real-life Republicans, who have consistently opposed civil rights for LGBT people, including marriage equality and employment protections. Loons like Jerry Fallwell regularly blame disasters like 9-11 on gay people, and it's American fundamentalist groups that are backing draconian laws like Uganda's, which call for imprisonment of gays and initially included the threat of capital punishment.

Chaos is a ladder: Lord Petyr “Littlefinger” Baelish sums up the show's philosophy nicely with his “chaos is a ladder” speech, pointing out that the ambitious can use confusion and destruction to their advantage to seize power. “Only the ladder is real,” Littlefinger tells Lord Varys. “The climb is all there is.”

Republicans in Congress have surely taken the idea to heart, delaying judicial and executive agency appointments by rote, shutting down the government last fall and creating repeated debt-ceiling crises because they hope to use the chaos, which has real consequences for real people, to their political advantage.

For both the characters in "Game of Thrones" vying for the crown and for Republicans vying for elected office, power is a game, sought for its own sake and to enrich those who hold it, never exercised for the actual good of the people. It's downright medieval.