"Do I look like Ethan Hawke in 'Reality Bites'?": Nightmares of the comic novelist! 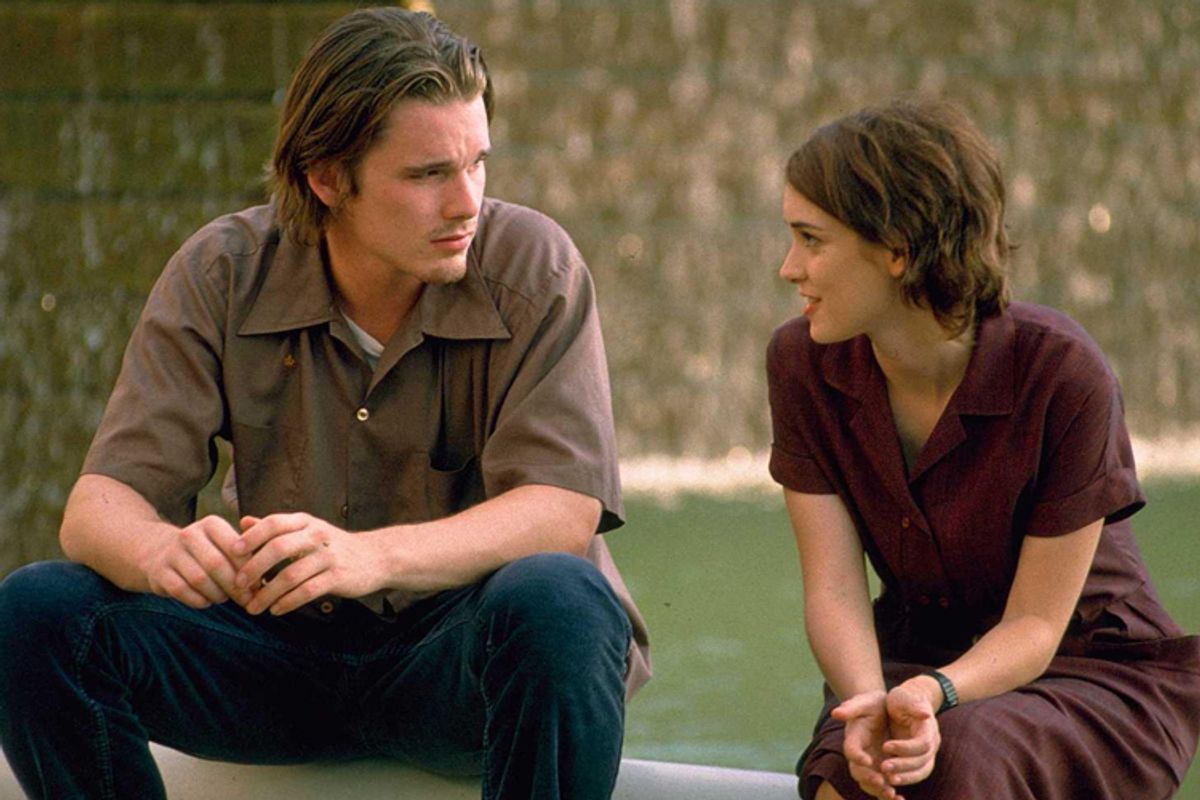 2014 is yielding a bumper crop of funny and smart books. I posed the same questions, none of which are directly about their books, to authors Adam Wilson ("What’s Important Is Feeling," a short story collection published in February), Kevin Brockmeier ("A Few Seconds of Radiant Filmstrip: A Memoir of Seventh Grade," out April 1), Alena Graedon ("The Word Exchange," a novel out April 8), Boris Fishman ("A Replacement Life," a novel out June 3), and Rachel Bertsche ("Jennifer, Gwyneth & Me: The Pursuit of Happiness, One Celebrity at a Time," nonfiction out July 1).

Without summarizing the plot in any way, what would you say your book is about?

BORIS FISHMAN: The distance between justice and the truth. How we reconcile ourselves to our elders. Becoming a person.

RACHEL BERTSCHE: Celebrity obsession/admiration. Us Weekly and People. Happiness, perfection and how the two are (or are not) related. Role models. Tutus and cleanses and watching the New England Patriots. Beyoncé and how un-put-together we all feel in comparison. The pursuit of parenthood.

KEVIN BROCKMEIER: Once upon a time there was someone named Kevin Brockmeier who couldn’t figure out whether he was a man gathered around the heartwood of a child or a child wearing the costume of a man.

WILSON: Marijuana was a huge influence on the book, not so much during the writing of, but certainly during the research years. Also Prozac, without which I would have never made it from bed to computer to write these stories. Trazodone allowed me to sleep at night. Burt's Beeswax chapstick was another major influence.

GRAEDON: A house fire. Late-1997 Beijing Internet cafes, in which private experiences were made public in lots of interesting ways. Love and heartbreak. The Mercantile Library in New York City. The Oxford University Press museum. Acting in a sixth-grade musical production of "Alice in Wonderland." Working in publishing. Inheriting volumes from my book-dealer grandfather’s enormous library. My mother’s black belt in karate. Candy (all kinds).

BERTSCHE: Aside from various authors I can’t name here, my books are influenced by my desire to make my life over into the I-wake-up-with-my-alarm-and-don’t-wear-pajamas-all-day version I am sure it will be one day.

FISHMAN: The great talent, industry and creativity that my people – that is, Russians – bring to crime, fraudulence and deceit. The distance, in everyday conversation, between what people say and really mean. The great amount of love given me by my family. The way people tell stories. Leaving one place for another at a young age. Never feeling fully at home anywhere.

GRAEDON: Working long hours. Trying to write every day, even if that meant balancing a laptop on one arm while standing up in the subway. Breaking things (bones, leases, my heart). Couch surfing. Searching those couches for loose change. Drinking homemade mead at house parties in Asheville, N.C., where there was always a guy in the corner hand-spinning wool.

FISHMAN: Relationship meltdown. Endless travel. Severe sense of rootlessness. Six years without an office job. Thanks so much for your submission, but I’m afraid we. Still working on the novel? Quitting cigarettes one hundred times. Getting sick. Getting better. Learning how to write. Not really. But a little.

BROCKMEIER: I wrote the book over two-and-a-half years, on either side of a teaching semester at the Iowa Writers’ Workshop, and I must say that it. My life, at its best, is a simple one of reading, writing, list-making, moviegoing, dining out, and conversing with friends, though while I was writing this particular book, I also spent a lot of time living imaginatively as a 13-year-old and.

BROCKMEIER: I’m at a loss here. I haven’t read any of my reviews, and the book is new enough that I haven’t spoken to many of its readers yet, either. My answer, then, will have to be entirely speculative. I hate it when people call my books “ingenious,” “sublime,” “masterly,” “unsurpassable,” “exquisite,” “incandescent” — you know, all the usuals.

BERTSCHE: I haven’t yet seen many reviews for this one by critics or readers, and wish I could honestly say I don’t read them or that I’ve learned to laugh at them. I’ve laughed at mean ones, sometimes, but I cringe more than I laugh. For my last book, I didn't love the words “bubble gum," which one reader used to describe the story. (Though, said reader also called Irvine Welsh and Judy Blume “bubble gum,” so I’ll take it.)

FISHMAN: I’m a fresh horse – my first is out this summer. Have not had the pleasure of a rage-worthy assessment … yet.

GRAEDON: I don’t think I despise any words. I’ve always really liked the word “autochthonous,” in part because of the little shiver of doubt I feel every time I try to spell or pronounce it. (I’d be really amazed if any reviewer ever used it in a description of my book.)

WILSON: Slacker is the one I'm always tagged with and I find it annoying. Like, dude, do I look like Ethan Hawke in "Reality Bites"? I wish.

WILSON: Country singer. I could be the first New England Jew to make it in Nashville!

BROCKMEIER: Cryptozoology: the study of creatures who seem as if they should not exist but might.

FISHMAN: Without an extra second’s thought: a rock star.

FISHMAN: Good at dialogue. Not so good at writing novels where the protagonist doesn’t learn anything because it’s a cruel, inconclusive world we live in. That hasn’t been my experience of it. It’s no joyride, but it’s full of learning and beauty. I like literature that points a way forward. A programmatically miserable ending is as lame as a happy one. In general, I am against programs. Must have been that Communism.

BERTSCHE: I think (I hope?) my strong suit is writing on the page what many women (and some men) are too embarrassed to admit that they’re thinking too. So, not sure this is a craft element but … honesty? I’d like to be so much better, and keep getting better, at pretty much everything, most especially killing my darlings.

BROCKMEIER:  Strengths: Broaching my sentences one tiny piece at a time, and termiting away at them until I’m satisfied that they present the right effect. Patterning my narratives so that they don’t display so much as insinuate their internal coherence. Weaknesses: the dramatics of plotting.

GRAEDON: I’d like to be better at everything, especially condensing — making scenes function more efficiently. And learning to trust that even quotidian moments can be very dramatic if they’re treated with thoughtfulness and integrity. But I like to think that I’m good at creating slightly off-kilter fictional worlds and at building tension and momentum (in scenes whose drama is not very quotidian).

WILSON: I think I'm pretty good at dialogue. What I'm not good is whatever the thing is that gives books mass commercial appeal. I have heard this element referred to as "plot."

BROCKMEIER: This is a question that I’ll have to answer doubly, since my latest book is a memoir, and the “anything” I’m saying something about is me. I’ve heard it argued that only the most momentous lives are worthy of memoir, and that may be so, but when I wrote this book my operating principle was that every life is momentous — or at least that it can be if you approach it with enough clarity and sympathy. I for one am interested in what everyone has to say, provided they say it well. That doesn’t mean that I can actually attend to what everyone says, just that I wish I could.

GRAEDON: Because I’m capable of falling not only down and up the stairs, but also out of bed, into furniture, and onto other people, I’ve had a pretty thorough education in not taking myself too seriously, which helps.

BERTSCHE: When I’m writing early drafts, publication seems so distant that it feels like the book will never be read by anyone, which makes it easier to be honest and write what I want and not worry about who will or won’t have any interest. When the later drafts come around, and the “why would anyone care?” question comes up — and it does, a lot ­— at that point it just feels like we’re so deep into it there’s no going back.

FISHMAN: Is it this nation’s Puritan roots that make this a viable question? What’s wrong with thinking you have something to say, especially if you’ve worked like hell to figure out how to say it in a way that will get people talking – because you’re deeply interested in what they might say, even if you’ll never get to hear it? For me, the problem is if you a) haven’t worked like hell to achieve it, or b) have worked like hell to achieve it but can’t own it because, although we live in a nation that likes hard work, and likes the win, and likes it big, we must pretend we have profound doubts about the value of our contributions. That’s not genuine humility. That’s a fig leaf.

WILSON: My sales figures always do a good job of dampening my spirit.