GOP's clueless ploy to woo women: Accuse them of whining and lying!

Keep telling the ladies they’re wrong about equal pay, Republicans. Democrats will thank you in November 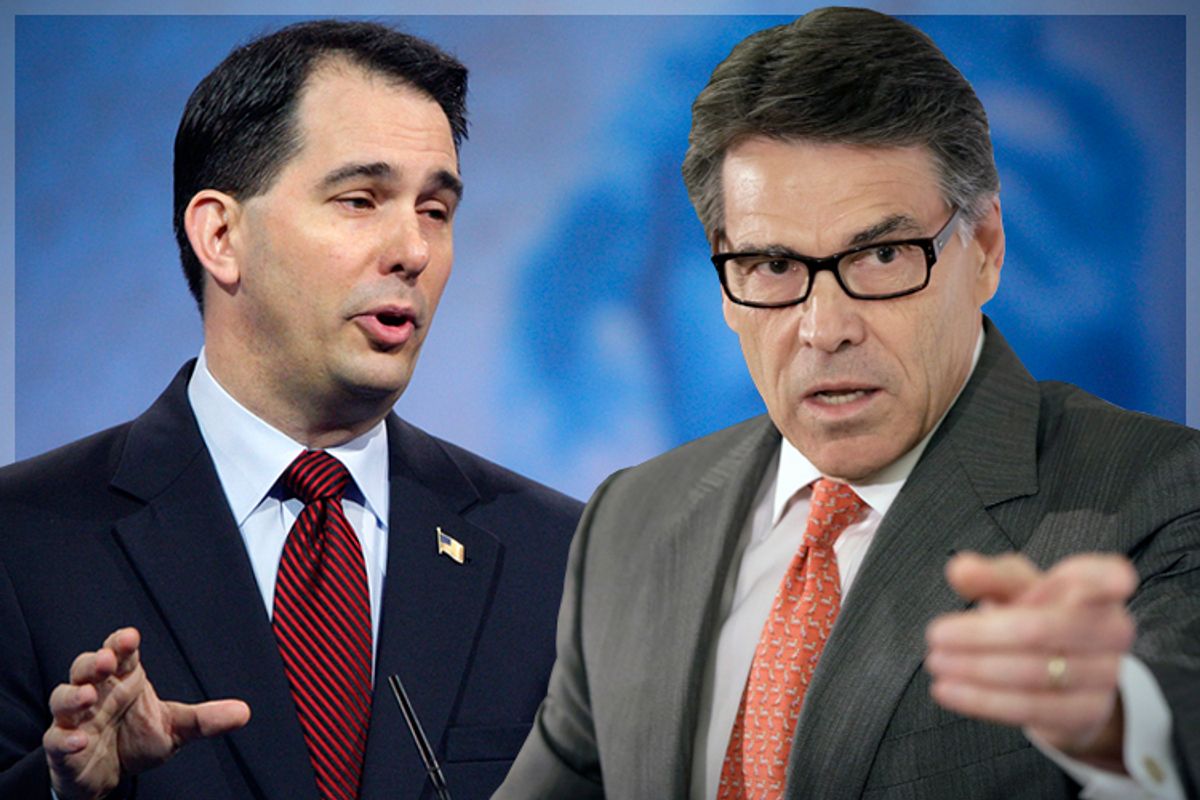 Fox News may be the funniest, insisting there’s no such thing as pay inequity -- except at the White House, where an American Enterprise Institute study found women still earning less than men. From the Heritage Foundation comes this wisdom: “Equal pay and minimum wage: Two ways to hurt women in the workplace.”  No really, that's the headline. Texas Gov. Rick Perry has called the pay gap “nonsense,” while Wisconsin Gov. Scott Walker called it “bogus.” Senate Minority Leader Mitch McConnell has called equal pay "the left's latest bizarre obsession" and accused Harry Reid of "blowing a few kisses" to advocates.

Essentially the GOP campaign against pay equity advocates comes down to telling women to stop lying.

Pay inequity means that women lose an average of more than $400,000 in wages over the course of their lifetimes. The infamous “77 cents on the dollar” figure approximates the overall difference between men and women, and conservatives like to claim it compares apples and oranges: Female teachers to male congressmen, for instance. The truth is, multiple studies by the American Association of University Women and others show that the gap exists across all professions and all education levels. In some fields, it’s wider, in some it’s smaller, but it’s omnipresent. And it’s much worse for African-American and Latino women, who make 62 and 54 percent of white men’s wages, respectively. (Asian American women suffer the smallest wage gap, earning 87 percent.)

Democrats believe they can ride those issues to victory in 2014, despite a tough climate for vulnerable incumbents and the propensity of its base to turn out for presidential elections but skip the midterms. One key will be turning out unmarried women, who have become one of the party’s most reliable constituencies after African-Americans. A recent survey by Democracy Corps shows that unmarried women are less likely to vote in 2014 than in 2012 – but that a strong women’s economic agenda could send many more of them to the polls.

Pay equity plus equal health insurance are the policies that score highest among unmarried women voters in the Democracy Corps poll. Right behind are proposals for paid family leave and affordable access to childcare. Democracy Corps found those issues had the capacity to significantly increase the turnout of unmarried women in 2014. Once they were read a list of women’s economic agenda policies favored by Democrats, the percent saying they were “almost certain” to vote in the midterm jumped from 66 to 83 percent.

And although those zany Heritage Foundation scholars last week told Republicans that the secret to solving their problems with unmarried women was to get more of them married, Democracy Corps found that unmarried women were skeptical of GOP policies to encourage marriage. Two-thirds favored greater emphasis on policies that enable work-family balance, to help women and children rise out of poverty, as opposed to 24 percent who backed policies that encouraged marriage.

That’s why President Obama signed two executive orders to narrow the wage gap. One prohibits federal contractors from punishing workers who disseminate information about wages (one way employers hide wage discrimination). Obama will also direct the Labor Department to collect data from federal contractors detailing wages by gender and race.  Obama is also urging Congress to pass the Paycheck Fairness Act – which it won’t – and a minimum wage hike, which is also unlikely.

The Democracy Corps poll also makes clear what many Democrats have suspected: Women like the fact that the Affordable Care Act prevents insurance companies from charging them more than men. Rep. Paul Ryan, who insists the GOP will still push to repeal Obamacare, is handing Democrats another weapon, the poll found.

There was one other interesting finding in the Democracy Corps survey: Unmarried women are very concerned about preserving Medicare and Social Security. That led pollsters to advise Democrats to include those issues in their women’s economic agenda. It makes sense: Women live longer, and are more economically insecure at every stage of life. Unmarried women in particular rely on Social Security and Medicare in old age. It’s just another reason centrist Dems should avoid the lure of the “grand bargain” that ensnared the president and his allies for years.

Earlier this year, a CNN poll found that 55 percent of Americans believe Republicans don’t understand women. That increased to 64 percent among women over 50, who represent a pillar of the GOP base. So smart, aggressive messaging on women’s economic issues could not only help Democrats turn out their base, but conceivably cut into the GOP’s. Republicans are unlikely to help their cause with a strategy that essentially calls women who worry about pay inequity “liars.”