The 2 percent's Medicare swindle: How rich doctors are making out like bandits 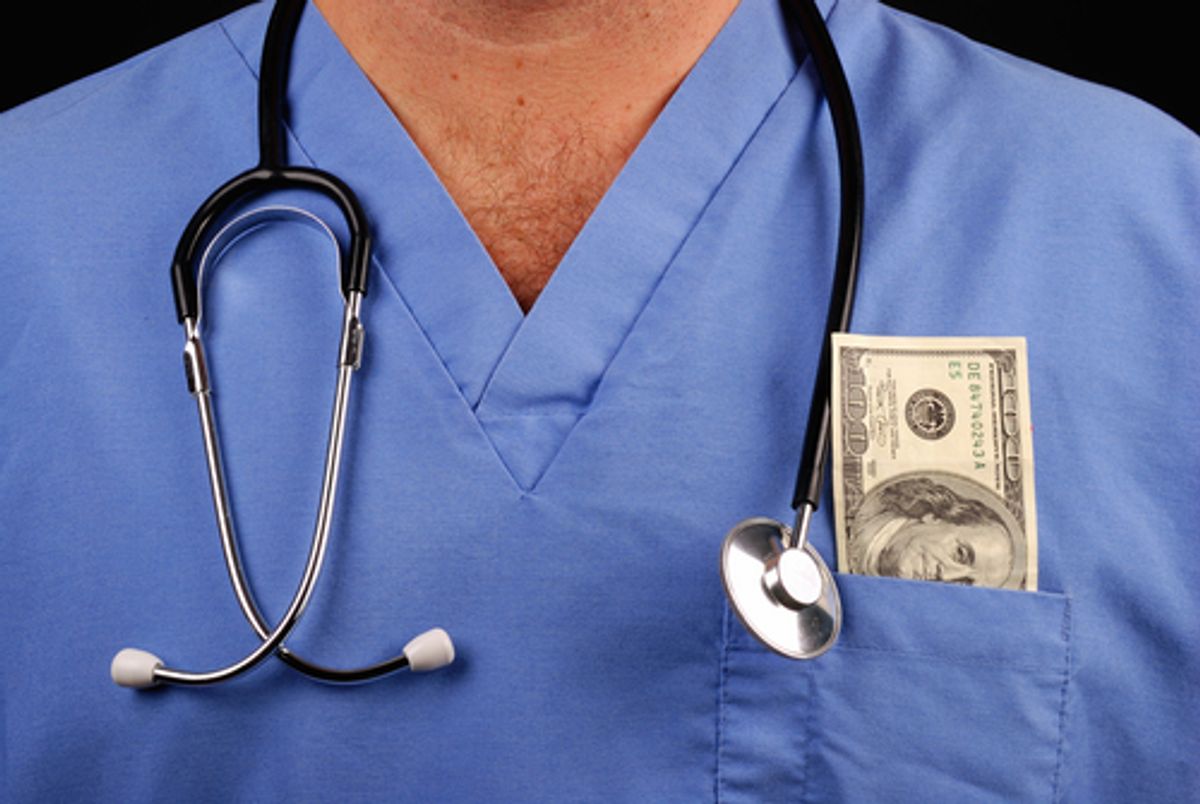 The Hippocratic Oath says 'Do no harm.' It doesn't say anything about not bilking the system for millions of dollars.

When it comes to Medicare payments, according to a new report featured in the New York Times and the Washington Post today, about 2 percent of the 880,000 doctors and other healthcare providers rake in a quarter of the money dispensed by the federal system. As reported in The Times, according to one of the most exhaustive studies ever done on Medicare, in 2012, just "100 doctors received a total of $610 million, ranging from a Florida ophthalmologist who was paid $21 million by Medicare to dozens of doctors, eye and cancer specialists chief among them, who received more than $4 million each that year."

The government insurance program for older people paid nearly 4,000 physicians more than $1 million each for work done in 2012, according to the new data. Several received more than $10 million each. Those figures do not include what the doctors billed private insurance companies.

More money is spent on routine visits than any specific procedure, but a certain eye procedure performed on the elderly is lining the pockets of a handful of crafty opthamologists. About 3,300 eye doctors were paid a total of $3.3 billion from Medicare, with much of the spending on a procedure to correct age-related macular degeneration. About 1,000 radiation oncologists also received a huge pile of cash, $1.1 billion from Medicare.

The release of the trove of data has been the subject of an intense legal battle. It not only sheds light on how doctors practice medicine across the country, but also enables consumers to loook closely at different doctors and the treatments and procedures they tend to perform. Unsurprisingly, it was the AMA, the powerful doctors group, who fought tooth and nail to keep the information from being released, citing privacy concerns. Fortunately for the public, a federal judge disagreed last year.

“This is actually the most useful data set that Medicare has ever released,” said Dr. Bob Kocher, who served in the Obama administration and is now a partner at Venrock, a venture capital firm. People will be able to see just how many elbow surgeries a given orthopedic surgeon has performed on Medicare patients, he said, and they will be able to better judge a doctor’s style of practice, for example, whether a CT scan is performed on every patient or only rarely. “You’re going to see variation,” he said.

A database, searchable by doctors’ names, is available at nytimes.com.

The release of the data is likely to unleash a torrent of new lawsuits. “There’s a lot of potential for whistle-blowers and justified worry for fraudsters,” Steven F. Grover, a lawyer who represents whistle-blowers who sue doctors and hospitals who they claim have committed fraud against the Medicare program, told The Times. “There’s going to be a lot of litigation over this.”

Other experts say the release of the information is likely to trigger a groundshift in health care delivery, with private insurers also being able to scrutinize what kinds of procedures doctors are performing, and whether they are necessary.

Read the whole story, complete with lots of helpful charts and graphics here.

The Office of Inspector General for the Department of Health and Human Services, which serves as a federal watchdog on fraud and abuse for the agency, released a report in December recommending greater scrutiny of those physicians who were Medicare’s highest billers. The report recommended that Medicare establish a threshold to look more closely at the high billers. Regulators have also said they are scrutinizing the use of high-paying codes in places including the emergency room.

Health insurance companies, which must now rely on only the claims they handle to look at doctors, are also likely to find the information valuable, according to Paul B. Ginsburg, a health economist and professor at the University of Southern California. Marrying the Medicare information to their own information, “all of a sudden they have a lot more to work with,” he said, in trying to better determine how an individual doctor treats patients — ordering lots of tests, for example, or being slow to operate. “This is going to be a very important change,” he said.

Experts say the data must be used with caution. An individual doctor, for example, may seem to have a high volume of services because that doctor oversees medical residents or physician assistants but bills for those services. Medicare patients may be only a fraction of the patients a doctor sees.

Despite its limitations, however, policy experts largely praised the release of the information, arguing that this was an important step to understanding how doctors practice medicine in this country.

“Any time Medicare releases a lot of data, it changes the conversation in America about transparency, about cost and quality,” said François de Brantes, the executive director of the Health Care Incentives Improvement Institute. “It’s more a signal from Medicare to market,” he said.