One look at a modern city street gives the distinct impression that pedestrians aren't welcome—but they should be! 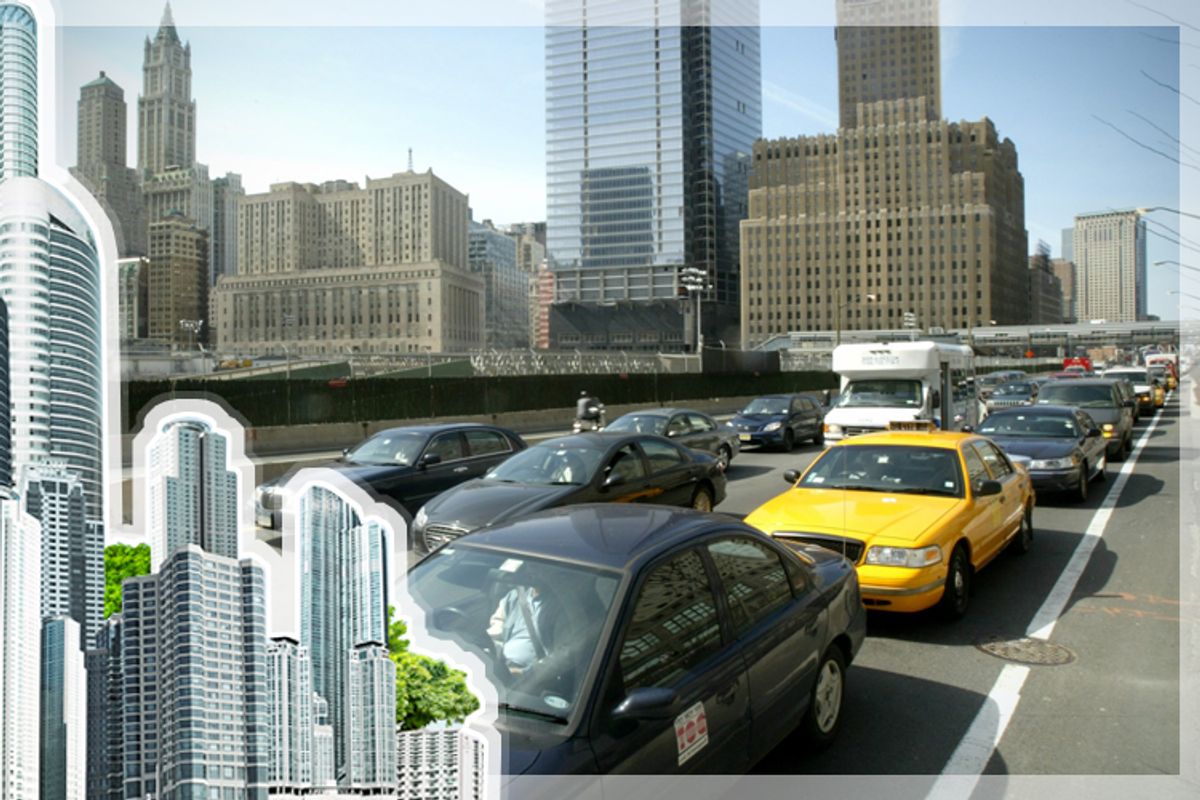 John Massengale and I are standing in the middle of 1st Avenue at East 4th Street, in New York’s East Village, and he does not like the feng shui. He points to the thick, white lines in the roadway, directing drivers toward a left turn. “Automobile-scale striping,” he notes. “It’s telling you: 'This is not a place for you.’”

No doubt about that. Nevertheless, here we pedestrians are, waiting for a torrent of cars to be released from a red light at Houston Street, four blocks south. “Something is telling your limbic system you’re not supposed to be standing out here,” Massengale continues, as the lights change on 1st Street … 2nd Street … 3rd Street ...

A taxi’s horn blares and we scamper to the sidewalk.

Massengale is not trying to kill me so much as teach me some street smarts. Along with the architect Victor Dover, he is the author of a recent book, "Street Design: The Secret to Great Cities and Towns." Part instruction manual, part history, part manifesto, the book argues that it is the street, more than anything, that shapes the city. In traveling to cities around the world and interviewing residents, pedestrians and businesspeople, Dover and Massengale found a remarkable degree of agreement about which streets are nice and which are not. “If there is so much consensus on what makes a good street,” they ask, “then why are we still building so many bad and ugly ones?”

On a recent spring afternoon, I asked Massengale, an architect and urban designer, to take me on a walk around Lower Manhattan, which is how we wound up on (and in the middle of) 1st Avenue. Redesigned in 2008, this road -- 70 feet wide like most Manhattan avenues -- represents the cutting edge of New York City street design. It features a set-apart bike lane, a row of parked cars, three lanes of traffic, a bus lane, and a final row of parked cars. Second Avenue, 8th Avenue and 9th Avenue have all received similar makeovers over the past decade.

The NYC Department of Transportation advertises this as a “complete street.” And yet, Dover and Massengale write, “it is first and foremost a suburban-style arterial for suburbanites to drive in and out of the city.” Street redesigns in the era of Michael Bloomberg (the most famous of which placed cafe tables along Broadway in Times Square) were famous for antagonizing drivers, but they didn’t slow them down. In fact, as the NYC DOT boasted last year, data from taxicab GPS systems showed that traffic in Manhattan below 60th Street had gotten 7 percent faster since 2008.

In "Street Design," car and pedestrian priorities are often at odds, if not inherently opposed. “I love driving,” Massengale says. “But I also love cities, and they’re in conflict.” This is partly a question of safety: According to the National Highway Traffic Safety Administration, 5 percent of pedestrians die when struck by vehicles traveling at 20 miles per hour or slower. At 30 mph, 40 percent die. At 40 mph, 80 percent die. Even on 1st Avenue, one of the busiest pedestrian streets in America, cars routinely travel at speeds likely to kill pedestrians and cyclists. (Mayor Bill de Blasio, who has made road safety a priority, is announcing a series of “slow zones” where the speed limit will drop to 25 mph.)

But designing for automobile velocity has other consequences. Because a driver’s ability to perceive his or her surroundings declines swiftly at high speeds, roads like 1st Avenue must employ suburban-style design, including expansive street markings (like messages printed in reverse) and hanging metal signs. Not only is this ugly, it sends a message to non-drivers: This road is not built for you. Cyclists must be relegated to the gutters, which are often full of plowed snow and in the blind spot of turning drivers. On the sidewalks, the proximity of speed and noise discourages urban social life.

What we have come up against, here at the corner of 1st Avenue and East 4th Street, is the hundred-year influence of what Massengale calls"Organized Motordom." Some of its effects have come to seem so natural, it’s easy to forget that things were ever any other way. Not only did motorists invent the word “jaywalker” and advocate for laws governing pedestrian conduct; they also popularized crosswalks and traffic lights. Triple-A had schoolchildren sign pledges to cross the street only at marked intersections. On New York streets like Lexington Avenue, as elsewhere, roads were widened, sidewalks narrowed and architecture modified (e.g., houses de-stooped) in the name of car convenience.

Perhaps the automobile’s most impressive achievement was legal in nature: In the first decades of the 20th century, pedestrian fatalities incited retributive violence, public protests and petitions for engine-installed speed restrictions. This week, a drunk and speeding driver who killed a woman in Brooklyn received no jail time and a $500 fine. A certain level of unpunished automobile violence has been accepted as a feature of the American built environment. As they say: If you want to get away with murder in America, get behind the wheel.

That's a lot to undo, especially in cities like El Paso, Phoenix and Miami, where automobile design is all the streets have ever known. Twentieth-century street grids are super-scaled, twice the size of their predecessors. But Dover and Massengale are optimistic. They offer prescriptions for true suburban arterials, like Arlington, Va.’s Columbia Pike — currently being redesigned around a streetcar project. They demonstrate what a modest makeover can do for a street like Dorn Avenue, in South Miami, which Dover, Kohl and Partners retrofitted in 1992 with parallel parking, wider sidewalks and a narrower roadway. As every dusting of snow makes clear, streets are full of unused space.

Of course, there is more to street design than traffic engineering. You don’t need anything but a crude map to understand the differences between the urban environment of Siena and the curling subdivisions of the Sun Belt. Some of our most famous streets are defined by their buildings (Wall Street); topography (Lombard Street); foliage (Unter den linden); street life (Las Ramblas); and so on. Some, like Paris’ Champs-Elysées or Brooklyn’s Eastern Parkway, manage to maintain their appeal despite extremely busy traffic. But those remain outliers.

Cities have used carrots like bicycle lanes, streetcars and street furniture to promote pedestrian traffic and the business that comes along with it. "Street Design" argues it’s time to bring in the stick as well -- to “make the streets slower and less convenient.”

Dover and Massengale posit that New York City’s congestion pricing plan -- which was awarded a $354 million federal grant to reduce traffic but could not pass the state Legislature -- could be otherwise achieved through design. Nearly all of New York’s great avenues were once two-way streets, Massengale points out. Why not bring back that concept? In 2011, he and Dover proposed a plan to transform the center of 2nd Avenue into a promenade with lanes for traffic and parking on either side.

"We’re in a period of experimentation,” Massengale says as we go past Allen Street, whose greenway-focused 2009 redesign he singles out for praise. Pedestrian injuries fell 60 percent at four reworked intersections. Citibike, he believes, has also had a calming effect on traffic. The contentious redesigns of the major north-south thoroughfares have also reduced injuries. Now, he says, it is time for Step 2. “I think 2nd Avenue is ready.”