As host of the MTV Movie Awards, Conan just wanted to be cool 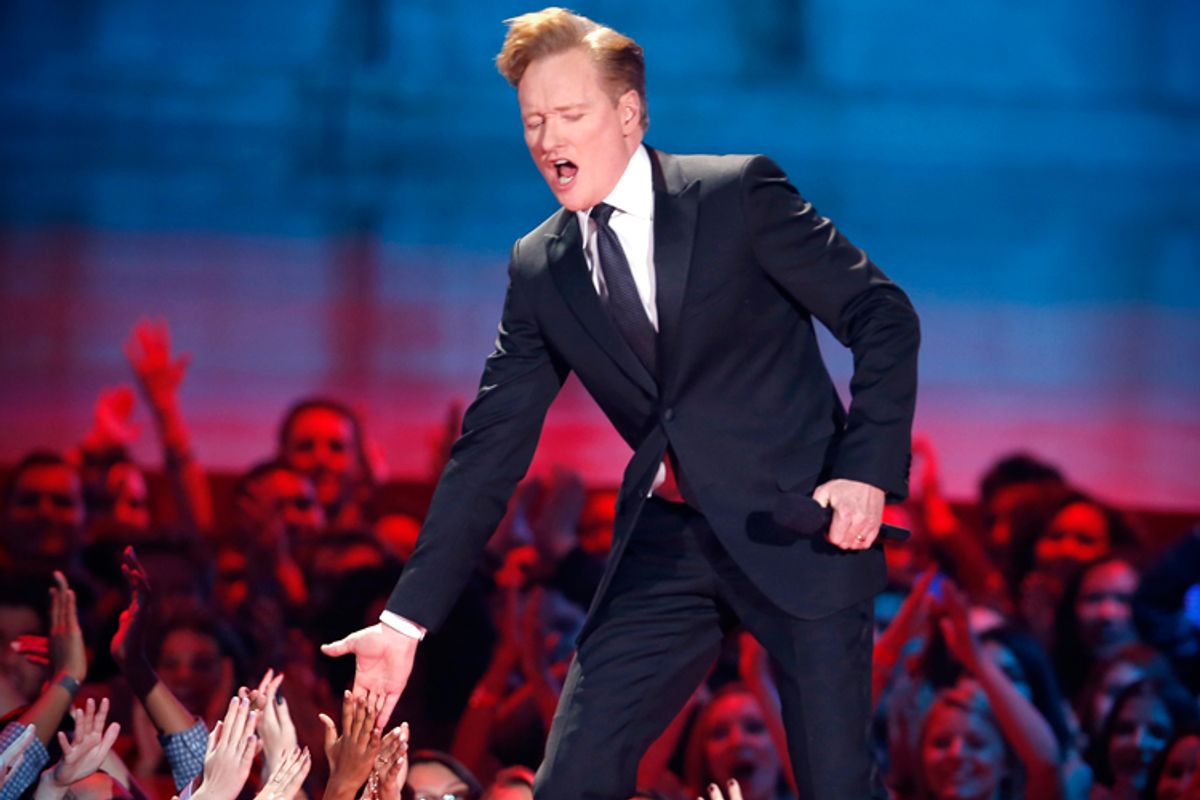 "I had one stipulation -- I had to have complete creative control," Conan O'Brien said at the start of the MTV Movie Awards. It may well have been his best joke of the night -- but one that induces, in retrospect, a wince.

O'Brien is now almost entirely outside the network-TV conversation whose center he once occupied. From his perch at TBS, he has been forced to watch as Fallon, Kimmel and most recently Colbert have risen to prominence on the broadcast dial. And last night he seemed oddly pissed off and unwilling or unready to do much for his audience. What seemed most obvious to a viewer who hadn't much watched "Conan" was the host's inability to adjust to a new era.

O'Brien's hosting stint began with a stunt -- an attempt to get 50 celebrities to join him in cameos. But what, exactly, is the joke in Sarah Silverman or Andy Samberg or Aziz Ansari appearing with O'Brien for a brief moment? Even the unexpected cameos -- Taylor Swift, say -- were funny because they were celebrities, and not because of anything Conan himself was doing. And the way his big awards-show moment was focused on celebrity-wrangling rather than, well, jokes seemed to be a sign of just where O'Brien sees himself in the culture right now.

The ceremony felt suffused with a kind of anxiety. The writer who'd been so innovative on "The Simpsons" and "Late Night" was reduced to presenting Vine videos summing up the nominated films as his monologue, and ceded yet more time to prepared bits when he did a weird gay-panic bit pretending to be in a clinch with Will Arnett. (Who, exactly, among this awards show's audience, or just generally, is waiting for Will Arnett gay jokes?) The whole thing ended with Conan O'Brien playing the electric guitar -- a moment of self-indulgence that felt less like the decision of a person with complete creative control than one of a person seizing a moment of control amid chaos. Still this was the only time he seemed at home, rather than straining to please an audience he couldn't possibly understand. But alternately grasping for and scorning an audience is maybe not the best way to host an awards show.

It makes sense that O'Brien would want to take an opportunity to reach out to a new audience on an awards show with a historically random hosting policy (everyone from Sarah Jessica Parker to Lindsay Lohan has hosted the MTV Movie Awards), and yet he seemed either unable or unwilling to adapt his talents for absurdism and arch humor to the format. Even the Grumpy Cat appearance in the opening segment felt, as did so much else, like a dad trying just hard enough to know what kids were interested in, but not enough to know how they actually speak.

This, more than anything, defined the night. Kids love social media -- so let's have a sketch in which O'Brien, for some reason, plays a "Geek Squad" member (hey, remember Best Buy?) who helps "The Amazing Spider-Man" star Andrew Garfield recover a lost password. The kids love buff movie actors -- so let's put O'Brien in a muscle suit without any further explication! The kids love Jared Leto, but even despite that, O'Brien's joke about his pact with his wife regarding sex with Leto felt weirdly off-tone.

Everything else, largely, at the MTV Movie Awards, was fairly coherent, which was why O'Brien stuck out so badly. The music performances were appropriately trendy (one presumes -- they were certainly tough to parse). The winners were right down the middle in terms of teen preference -- no, Chiwetel Ejiofor didn't sneak one over on Josh Hutcherson. And even honorary award recipient Mark Wahlberg, not anyone's idea of a teen idol though still a success story, was gracious in his acceptance, acknowledging that his award meant he was too old to allow him back to the show ever again. Let O'Brien learn the same lesson. It'd be too painful to watch him try to integrate next year's memes and new social media into an awards show -- and no one needs to see him pull out his guitar again. Thankfully, O'Brien has the safety of his fan base and his TBS show, to return to; and soon this MTV sojourn will feel as much like a footnote as any other time Conan has gone a bit beyond his comfort zone.