The left's "Muhammad Ali" strategy: What it takes to beat the Kochs' Obamacare attacks

Right-wing billionaires are rushing the airwaves with lies about Obamacare. Can a late surge really save Democrats? 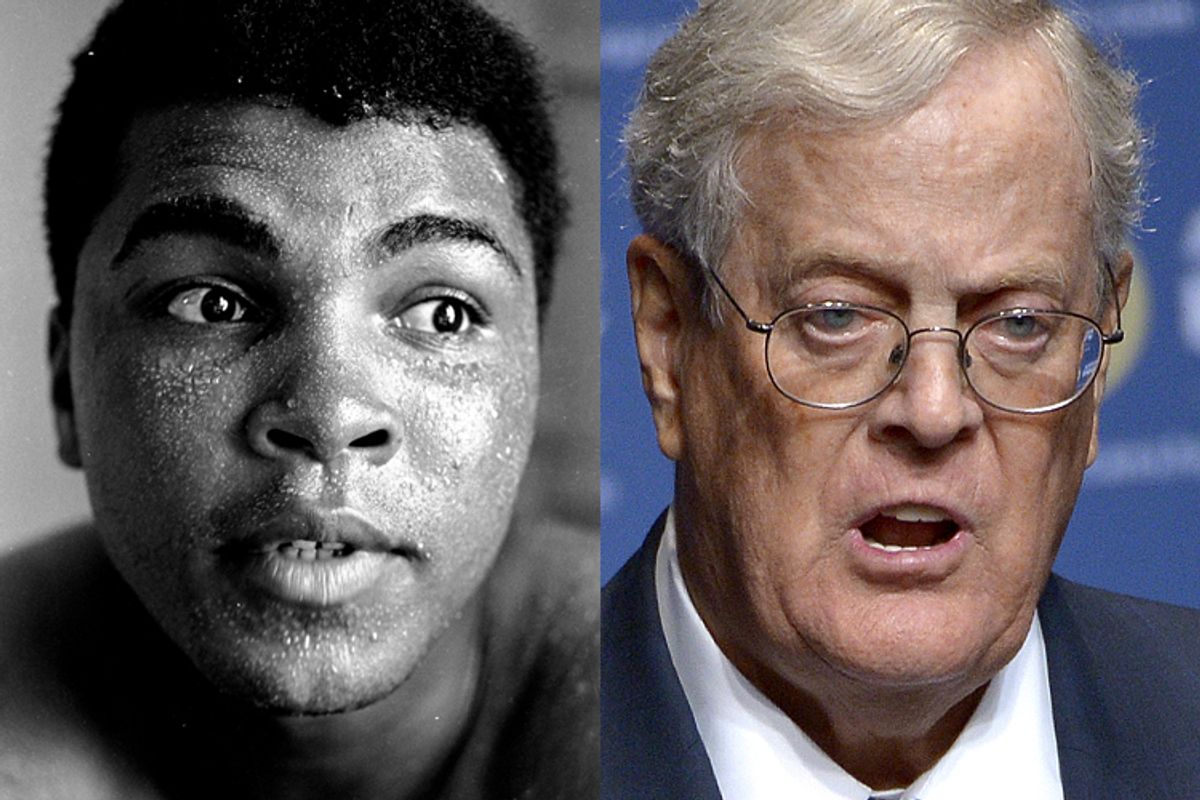 Suppose you were a manufacturer who created a new product that could conceivably benefit everyone at some point in their lives but will only be needed by a small number of them at any one time. And further suppose that this product was a threat to another manufacturer who would suffer long-term erosion of its customer base if this new product really took hold in the marketplace. Would it make sense for the manufacturer of the new product to sit idly by while this rival spent millions and millions of dollars on false advertising about the new product? Would it be reasonable to believe that after being inundated by lies for months the public would be positive about this product and the people who made it?

Apparently, that's what  Democratic Senate incumbents are all counting on happening. According to Politico, they are keeping their powder dry for the fall campaign while the Koch brothers and lord knows how many other radical right-wing billionaires spend unlimited sums spreading lies about Obamacare:

[M]any of the most endangered Democratic incumbents have decided it’s better to wait out the barrage than to respond in-kind.

They’re gambling that it makes far more sense to build a sizable war chest and hold off until closer to the election to engage their opponents in an expensive TV war. The idea: Absorb the ads from the conservative group Americans for Prosperity now and hope some help from their Democratic allies, like the Senate Majority PAC, helps to keep their races competitive. Then, when the time comes, unleash a flurry of attacks that will give them a late bounce and potentially victory come November.

That's a great strategy --- if you're Muhammad Ali. For normal humans it's a very big gamble to allow yourself to be relentlessly pummeled in the hopes a late surge of energy will allow you to score a knock-out.

Keep in mind that most people will not have personally dealt with the new program. The vast majority of the American public is covered by employers or direct government programs like Medicare and Veterans Administration. More than 10 million citizens will likely have signed up for Obamacare, most of whom will be pretty happy with the improvements --- which leaves a couple of hundred million, at least, who are only hearing about the program secondhand. Doesn't it seem logical that hours and hours worth of negative TV propaganda is likely to taint their impression of the program? I'm afraid your average voter in North Carolina or Alaska doesn't pay a lot of attention to the Washington Post's fact-checking columns.

Naturally, Politico sees this issue through the Beltway's conservative lens and says the risk is that Democrats will be seen as "apologists for President Barack Obama and his health care law before they’ve defined themselves to undecided voters" which is just daft. The risk is that the program will be seen as a failure. They can't run from it. Anyone with a D after his or her name will have to defend it whether they like it or not. It's the Democratic Party's signature legislation of this era, for better or worse, and there's no point in trying to pretend otherwise. The longer they wait to make sure the people see the program in a positive light, the harder it will be to change their perceptions.

That hasn't stopped Louisiana Sen. Mary Landrieu from running one of the few counter ads, in which she's touting her bill to "modify" the law. Good luck with that. And Alaska's Mark Begich, who has the luxury of being in a low-cost media market, has actually spent more than the Republicans, defending his own record and touting his plan to expand Social Security, which is a pretty interesting approach. The rest of the Democrats are paying their consultants and otherwise sitting on their cash.

But let's face facts. This isn't just a strategy, it's an admission that Democrats are not able to keep up in the money race. The chairman of the DSCC admits as much. He told Politico:

“We’re facing an unprecedented torrent of unregulated cash in this campaign cycle. … But it’s important we are disciplined and that we execute our campaign plan … to make sure we are competitive on the air and that we also have the resources to drive up turnout.”

“That’s the balance that every one of these candidates (is) striking,” Bennet said.

These Democratic incumbents are husbanding their resources for a late campaign and perhaps that makes sense since they seem convinced that there is only a finite amount of money available to them. But why aren't the Democratic-affiliated PACs running ads in all those states featuring stories of people who've been helped by Obamacare? It's not that they don't exist. There must be many, many people out there who couldn't get insurance before because of preexisting conditions or whose insurance was so expensive they could barely pay the rent. I personally know some and I'm sure they're not hard to find. This seems like it should be a no-brainer. After all, if this is just a matter of spending $50 million or so, it would hardly be a drop in the bucket for your average billionaire. Can't the Democrats find a couple who think this is worthwhile? (And what does it say about our political system in 2014 that we even have to think in such terms?)

On the other hand it may be that the Democratic consultants have actually decided that it's best for these threatened incumbents to distance themselves from the program and try to finesse their way into another term without being associated with it. If that's the case, they will be facing a despondent Democratic voting base and a horde of very excited and motivated Republican midterm voters. After all, they will all have been seeing nothing but negative ads about senators they are told are responsible for the greatest legislative disaster in American history. Even Ali couldn't get a winning decision out of that one.