The submarine drone is nearly done searching, and international investigators are pondering a deeper search 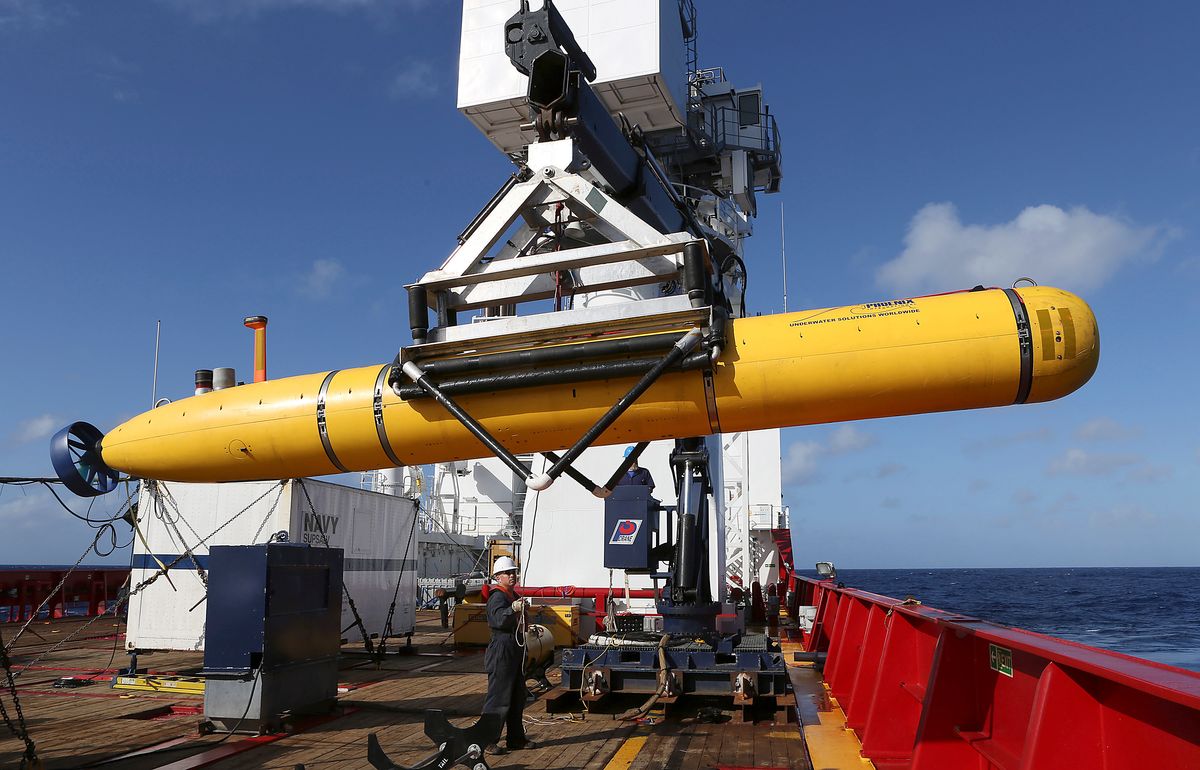 In this Thursday, April 17, 2014 photo provided by the Australian Defence Force the Phoenix International Autonomous Underwater Vehicle (AUV) Artemis is craned over the side of Australian Defence Vessel Ocean Shield before launching the vehicle in to the southern Indian Ocean in the search of the missing Malaysia Airlines Flight 370Malaysia Airlines MH370. Up to 11 aircraft and 12 ships continue to scan the ocean surface for debris from the Boeing 777 that disappeared March 8 en route from Kuala Lumpur to Beijing with 239 people on board. (AP Photo/Australian Defence Force, Bradley Darvill) EDITORIAL USE ONLY (Lsis Bradley Darvill)
--

Australian officials have confirmed that debris -- potentially from missing Malaysia Airlines flight MH370 -- was found washed up on a western Australia beach. The debris was discovered around 198.8 miles from Perth, and roughly 1,000 miles away from the center of the Indian Ocean search zone. Australian police have secured the debris, and authorities from both Australia and Malaysia are examining photographs.

"The Australian Transport Safety Bureau (ATSB) is examining the photographs of the material to determine whether further physical analysis is required and if there is any relevance to the search of missing flight MH370," The Joint Agency Coordination Center said in a statement. Results of the examination have yet to be released. If confirmed, this would be the first physical evidence found of the Boeing 777, which disappeared roughly six weeks ago.

The multinational search team is scouring the southern Indian Ocean, where satellite data concluded the flight ended. Twelve ships are currently searching for floating debris; the aerial search was suspended due to inclement weather and poor visibility.

The deep-sea underwater search, being performed by U.S. Navy autonomous underwater vehicle Bluefin-21, is also well underway -- and nearly complete. The Joint Agency Coordination Center reported that Bluefin-21 has searched 80 percent of its specified search area. Despite this, CBS News is reporting that Australian Defense Minister David Johnston said that the Bluefin-21 could take two more weeks to finish combing the seabed.

The circular search zone centers around the location of two "pings," consistent with black box signals, picked up on April 8. It is roughly 12 miles in diameter, and encompasses never before charted sea floor territory. "A lot of this seabed has not even been hydrographically surveyed before - some of it has - but we're flying blind," Johnston told reporters. He also explained that parts of the search area are up to 4 miles deep.

The Bluefin-21 uses side-scan sonar to create a high resolution three dimensional map of th seafloor. However, it can only dive a depth of 2.8 miles, and even ran into problems on its first day of searching due to depths beyond its capabilities. "The next phase, I think, is that we step up with potentially a more powerful, more capable side-scan sonar to do deeper water," Defense Minister Johnston told the Associated Press. Australia is working alongside the United States, Malaysia and China to plan the next course of action. A plan is likely to be announced on Monday.

Whether Bluefin-21 finds anything of note or not the search will continue, Australian Prime Minister Tony Abbott told reporters. "If at the end of that period we find nothing, we are not going to abandon the search, we may well rethink the search, but we will not rest until we have done everything we can to solve this mystery," Abbott said.

"We owe it to the families of the 239 people on board, we owe it to the hundreds of millions - indeed billions - of people who travel by air to try to get to the bottom of this," He continued. "The only way we can get to the bottom of this is to keep searching the probable impact zone until we find something or until we have searched it as thoroughly as human ingenuity allows at this time."

Malaysia Airlines flight MH370 and the 239 people on board have been missing since March 8 when their plane failed to land at its scheduled destination in Beijing.