Manhattan's surging flood risk: City could end up underwater every 1 in 4 years

The risk of flooding from storms is 20 times greater than it used to be, a new study finds 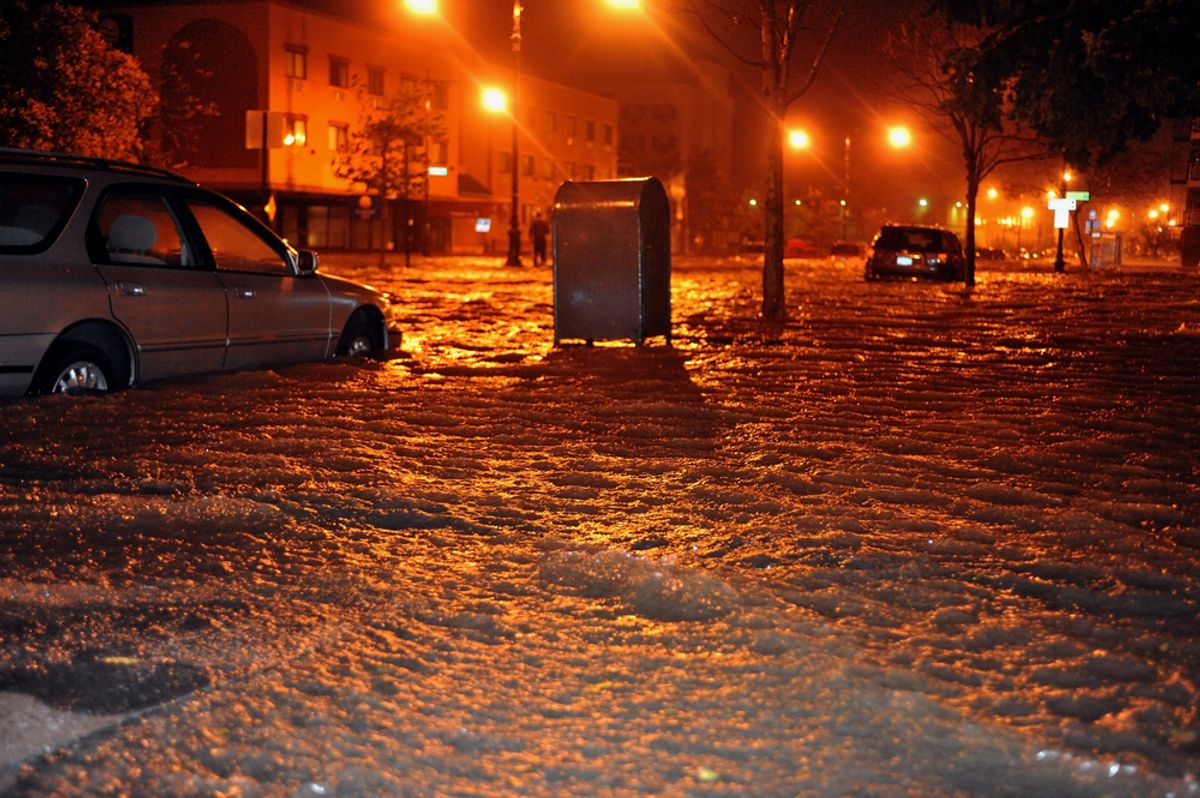 Flooded streets, caused by Hurricane Sandy, are seen on October 29, 2012, in the corner of Brigham street and Emmons Avenue of Brooklyn NY, United States. (Anton Oparin/Shutterstock)
--

When the next superstorm hits New York, the city's a lot more likely than in the past to end up underwater. A new study, accepted for publication in the journal Geophysical Research Letters, finds that the combined factors of rising sea levels and growing storm tides -- the amount of sea rise that occurs during a storm -- are threatening to overtake the lower Manhattan sea wall.

A storm tide high enough to flood New York, researchers at Portland State University and Stevens Institute of Technology in Hoboken found, is now 20 times more likely to occur than it was 170 years ago. Whereas before we could talk about a once-in-a-century, or even once-in-four-centuries storm, Manhattan's now looking at such an event once every four or five years.

Looking back through New York Harbor's recorded history, the researchers noted that three of the nine highest water levels have occurred since 2010; eight of the highest 20 have occurred since 1990. Storm tides, they found, are playing a significant role in this trend -- they've increased by about a foot since we started keeping track of tide gauges in 1844. The flooding that occurred during Hurricane Sandy, Climate Central explains, was the result of a a record-breaking high storm tide, itself helped along by a 9.4-foot storm surge and by the full moon, which brought higher-than-normal tides: Mashable's Andrew Freedman has more on what might be going on:

A steady drumbeat of studies have been published in recent years warning that coastal cities will have to adapt to frequent assaults from the sea, with growing coastal megacities in the developing world facing the biggest challenge.

For example, a 2012 study found that an additional 3.3 feet of sea level rise would cause the current 100-year flood event to occur far more frequently along the East Coast, at about once every 20 years. Engineers typically design infrastructure to withstand a 100-year storm, which means that if 100-year events become more frequent, buildings, railways, and bridges may not be strong enough.

[Lead author Stefan] Talke told Mashable that while sea level rise likely accounts for a significant amount of the added coastal flooding risk in New York, other dynamics are also at work. Over the past 150 years, he said, there were other major manmade changes to New York Harbor as the city grew.

For example, New York lost 85% of its wetlands during that period, and these helped to blunt the impact of a major storm surge. In addition, the shipping channel between Sandy Hook, New Jersey and Raritan Bay used to be just 24 feet deep in the 1800s, whereas they have been doubled in order to accommodate large container and cruise ships.

The study “highlights the fact that rising sea levels have already stoked an increase in the frequency and intensity of coastal flooding” and “also suggests that storms themselves may have grown stronger," climate scientist Radley Horton of the Northeast Climate Science Center and NASA’s Goddard Institute for Space Studies told Climate Central. “The verdict isn’t in yet about how coastal storms are going to change with climate change," he added. But New York City Mayor Bill de Blasio would be wise, it would seem, to follow through on former Mayor Bloomberg's $19.5 billion plan to build up the city's defenses.