It's no shock that conservative heroes always end up being racists. The Republican playbook made them that way 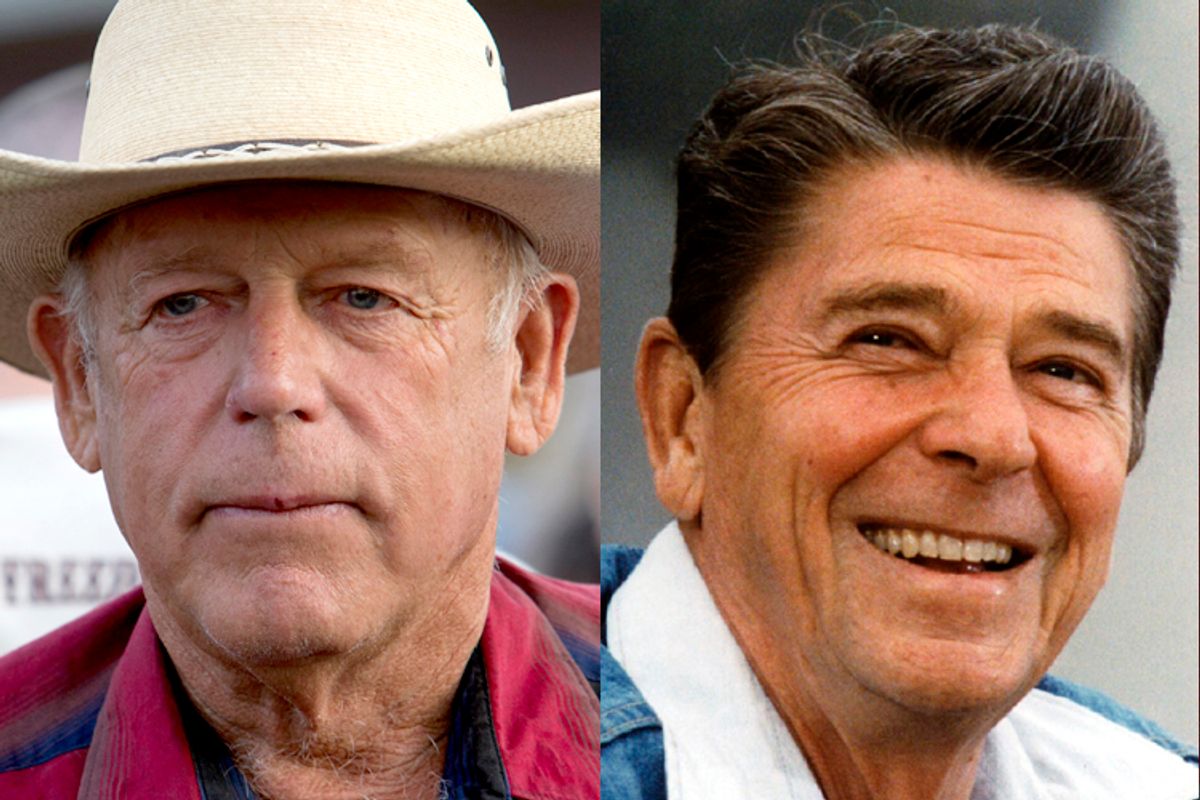 Surprise! Surprise! The latest conservative lumpen-hero of the moment, Cliven Bundy, turns out to be incredibly — in fact, radioactively — racist. (Video here, in case you were abducted by space aliens on Wednesday, and have just now returned.) I say, "Surprise! Surprise!" because, of course, it's no surprise at all, as a New Republic piece by Brian Beutler puts it in its title, "By Sheer Coincidence, Conservative Martyrs Keep Turning Out to Be Huge Racists."

But everything hinges on why, exactly, conservative martyr-heroes keep turning out like that. Is it just a mistake you can blame on central casting? Nothing to do with the script! No sir! The script is golden! On "Andrea Mitchell Reports," Chris Cillizza gave a perfect rendition of this neutral sort of journalistic take. “It's in some way a function of our modern media world,” he said. “These people pop up out of nowhere all over the county,” and the poor hapless politicians fall for it, without doing proper research into them. Sort of like John McCain and Sarah Palin, I suppose you could say.

Or is the problem too persistent to explain away like that? Is there something actually wrong with the script? Something inherently inclined toward racism in complaints about oppressive big government on the one hand, and minority moochers on the other? It turns out there are multiple sorts of evidence that this is the case.

First, consider a 2001 paper from the Brookings Institution, "Why Doesn't the United States Have a European-Style Welfare State?" One the one hand, the paper found a direct statistical correlation between welfare state spending and the size of minority populations — the more minorities, the lower the levels of spending. This held true both internationally (comparing more than 60 different countries) and nationally (comparing all 50 states). On the other hand, it did not say this was the only reason. The paper discussed the roles of political institutions, history and geography, and "reciprocal altruism," about which the authors wrote:

Reciprocal altruism implies that voters will dislike giving money to the poor if, as in the United States, the poor are perceived as lazy. In contrast, Europeans overwhelmingly believe that the poor are poor because they have been unfortunate.

This, in turn, leads to the role of race:

Racial discord plays a critical role in determining beliefs about the poor. Since racial minorities are highly overrepresented among the poorest Americans, any income-based redistribution measures will redistribute disproportionately to these minorities. Opponents of redistribution in the United States have regularly used race-based rhetoric to resist left-wing policies. Across countries, racial fragmentation is a powerful predictor of redistribution. Within the United States, race is the single most important predictor of support for welfare. America's troubled race relations are clearly a major reason for the absence of an American welfare state.

In short: Racism makes the poor seem undeserving, and it makes a government inclined to help them seem out of control — even dangerous. Racism and the script fit together logically, not just accidentally. Government should not help, and minorities should stand or fall on their own.

There's further supporting evidence from public opinion research. The General Social Survey — the gold standard of American polling — asks about support for spending on a broad range of national subjects, which can be cross-tabbed with attributed reasons for blacks' low socioeconomic status—either external (mainly due to discrimination), internal (lack of motivation or willpower to pull themselves up out of poverty), or mixed. Looking at nine different spending items in September 2009, I found that in every case people favored more spending if they attributed external reasons rather than internal ones. In every case but one, mixed attributions fell in between. This even held for items like Social Security, childcare and environmental protection, which seem far removed from race. Once again, those who have a problem with blacks are more likely to have a problem with big government spending as well.

There's further evidence from specific American history, which Rachel Maddow delved into in her lead-off segment Thursday. Although it was not her stated purpose, the tale she told clearly connects negative attitudes toward blacks with hostility to big government — and it connects both to a specific history and mythology that Cliven Bundy is part of. Maddow explained how the tightly intertwined sovereign citizen and posse comitatus movements — both represented by Cliven Bundy and his supporters — descended from the post-Civil War South's first successful roll-back of federal troops protecting African-Americans and defending the Civil War Amendments: the Posse Comitatus Act of 1878 (which opened the way for establishing Southern segregation and the violent suppression of black rights in the South) and the hard-right anti-government Posse Comitatus organization founded in its name by William Potter Gale, among others, in the 1970s. Maddow's concise history touched on the violent shootouts involving Gordon Kahl, as well as Ruby Ridge and the Oklahoma City bombing — Maddow noted that Timothy McVeigh was apprehended because he was driving a truck without any license plates, “because sovereign citizens don't believe in license plates.”

Maddow made it clear that she didn't believe that Fox News and the conservative media more generally were hyping Cliven Bundy “because he is a posse comitatus guy,” she said, “but somebody should have noticed that he kept bringing this stuff up.” I find it downright strange that Maddow digs so deeply into what makes Cliven Bundy tick, and then gives the conservative media a big fat Chris Cillizza-style pass.

You see, the right-wing media has long been deeply involved in mainstreaming precisely these sorts of hard-right, anti-government views, along with negative stereotypes of blacks and other minorities. This was one of the key points of one of the most important political texts of the early 2000s Internet, "Rush, Newspeak and Fascism" (winner of the 2003 Koufax Award for best series), by investigative author, journalist and blogger David Neiwert.

For anyone on the right to pretend to be ignorant of this circulation of ideas, they must be very careful to ensure that their right hand doesn't know what their far-right hand is up to. Indeed, this exact same sort of knowing/unknowing was clearly (which is to say, muddle-headedly) involved in Ron Paul's notoriously (but not necessarily sincere) racist newsletters, which he tried to disavow when they were brought to light in recent years, but had openly defended in 1996.

But we don't have to confine ourselves to the shadowlands of right-wing media to see this knowing/unknowing dynamic at work. The same dynamic applies to the workings of more soft-core racism as well, for example, in GOP strategist Lee Atwater's famous explanation for how the Southern Strategy evolved over time, driven by a shifting balance of what people could comfortably hide from themselves.

This strategy had to be racist enough to reach people and appeal to them, and yet be deniable as well, once racism itself had become stigmatized. Not least, it had to be deniable by the very people it was intended to reach. Furthermore, as Salon's Joan Walsh explains in her book, "What's the Matter With White People?," Nixon had a Northern strategy as well — one that targeted white ethnics like her own family. Under Reagan, the Northern strategy became key, its targets known as “Reagan Democrats.” And Cliven Bundy was the perfect embodiment of everything this strategy was built around.

"I didn't leave the Democratic Party, the Democratic Party left me!" Reagan famously said. Of course Reagan's story was a lie, as this 1948 radio campaign ad he cut clearly shows: It was Reagan himself who abandoned his roots — his Elizabeth Warren-style economic populism, his support for unions and a can-do New Deal government. But he always pretended that he hadn't changed, the Democratic Party had. The implicit claim was that the party that once helped the white ethnic working class had villainously turned against them to help the lazy, shiftless blacks, instead. Hence Bundy's sense of victimhood from big government and his racist resentment of blacks were, once again, two sides of the same coin — the lousy wooden nickel that Reagan cheerfully sold to millions of voters just like him back in the day.