The life and death of the selfie: How it transformed pop culture — and then jumped the shark

As a cultural phenomenon, the "selfie" is on a level of its own. But did it get too big too fast? 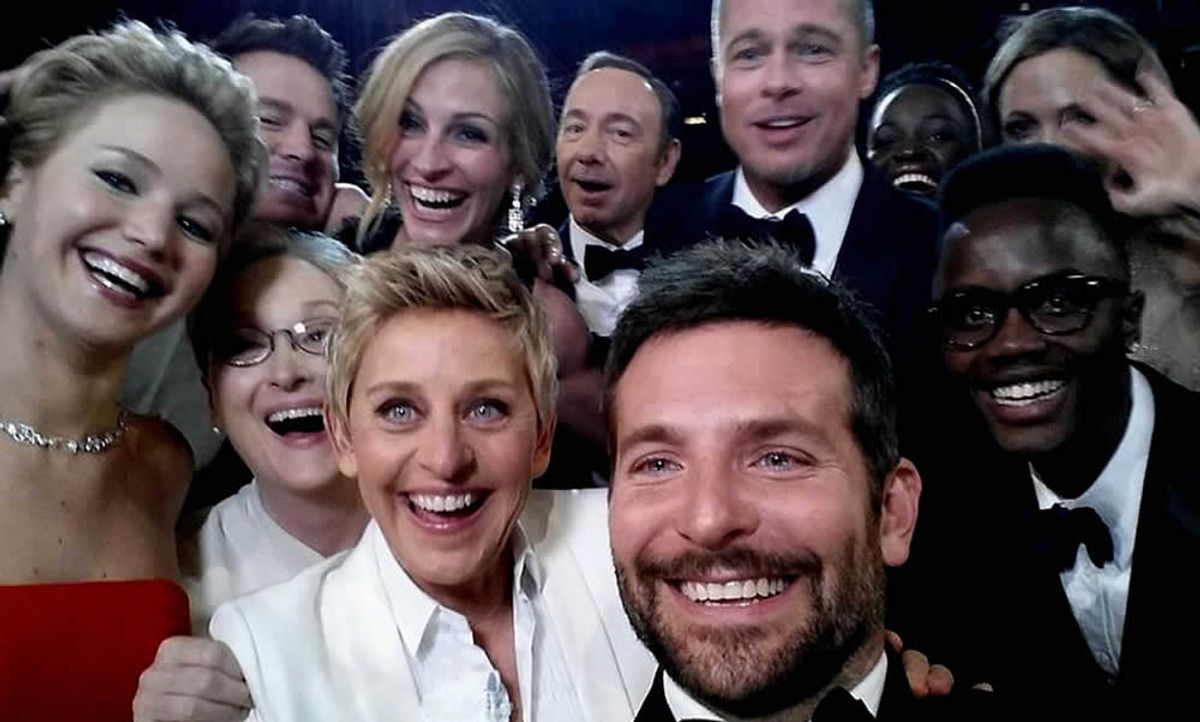 When an ultimately trivial cultural phenomenon reaches the president or takes a life, as it did this week, then I think it’s fair to say the trend has peaked—at least we hope it has.

The phenomenon cannot survive such levels of frenzy. But right now, it defines our cultural moment.

The rich, famous, and influential have discovered the selfie, and perhaps at first, it was a moment of connection. The Oscar selfie, which quickly became the most retweeted post in history, made us feel that we were as cool as all those movie stars, at least for a moment, because, hey, we do that! Stars—they’re just like us.

Then there’s the presidential selfies. Now, usually, a president doing anything kills the cool. But not this president. If Nixon had taken a selfie, we would feel very different about the whole thing. And to be fair, even Obama was off to a rocky start, taking a selfie with several other world leaders at Nelson Mandela’s funeral. But he quickly recovered the cool with a selfie with a champion baseball player (even if it did turn out to be product placement), causing us to wonder whether the White House would ban presidential selfies; and finally our affably awkward Vice President Joe Biden snagged one for his new Instagram account.

We are watching the selfie jump the shark in real time.

For the record, I was an early enthusiast of the selfie. Long before the camera phone was invented, I would refuse offers from waiters, tour guides, and kindly passersby to take a nicely framed picture with my pocket point-and-shoot. I preferred instead to do it myself at arm’s length.

As a result, I have a variety of photo collections from family trips or excursions with friends. There’s me, smiling; my brother, smiling; and my mother’s forehead—she is much shorter, so it was very difficult to keep her in frame. In the best ones, she’s peering over the bottom edge of the frame, a latter day Kilroy. And somewhere in the background are a few barely recognizable stones of some site of dusty historical interest.

The shots with friends were more spontaneous, and they served a secondary function of preserving plausible deniability: Do those kids look like they’re abusing substances of some kind, or is it just this strange and awkward camera angle?

In the pretention of film-school-headed youth, these shots were a kind of pop art, in their intimacy, awkward spontaneity, and imperfection. They were a whimsical moment of truth, in a medium more often used to facilitate artifice.

But as we have now en masse turned to the selfie, intimacy and spontaneity may be the conceit, but they have become as artificial as any Hollywood movie. We don’t have to wait until the film is developed to know what the camera has revealed; we can simply use the front camera and pose ourselves just so, desperately trying to find our best angle—like Claudette Colbert whose movie contract stipulated that she could only be photographed from the left.

The spontaneity is gone. Nowhere is this more obvious than in those cases of rich and famous selfie shooting. The world’s most tweeted moment wasn’t a moment of “stars being just like us.” It was a planned and paid-for product placement. The same goes for the president’s post-World Series selfie. At least the moment at Mandela’s funeral was an instance of the most powerful man in the world being just like us—presumably he was honestly excited to find himself in the same room with two other world leaders. But nobody liked that one.

In California, an artist named Gabe Ferreira unveiled his latest work, a giant iPhone selfie installation. The screen of the 7-foot-tall iPhone is a mirror, inviting you to stare at yourself in the triumphal scale.

The same week in Russia, a 17-year-old girl went out in search of selfie triumph, with tragic results. She leaned out over train tracks, hoping to get “the most dramatic effect” and beat the other kids, who’ve been climbing buildings for their selfies. She lost her balance and grabbed a power line, sending 1,500 volts through her body. She died within moments.

Over the last century the camera has emerged and evolved as a popular art form, culminating, in this moment of the selfie. In our phones, the camera has become something other than it has ever been, demonstrating just how the technology and culture of the Internet has changed humankind.

At first, back in the 19th century, the camera was a tool exclusively for professionals. But once the point-and-shoot came out, it became a popular tool to document our lives—from the trite slideshow of your parent’s Grand Canyon trip, to the clichéd jokes about Japanese tourists.

Then we had the camcorder, and Dad sacrificed his experience of the school play to watch the whole thing through the lens in the expectation that you would want to experience it yourself later, or maybe your aunt would when she visited. Or maybe it was just so that he could experience this fleeting moment again when you’d grown up and turned into an awful teenager.

We started seeing the world through a lens, and we shared our view of the world.

Cameras got smaller and integrated into our phones, and thus into our pockets where they are now at all times; at nearly every moment there is a camera within three feet of your body. And in that transition, something interesting happened: We turned the camera around.

But with the loss of spontaneity, with the artifice enabled by the front-facing camera, it is not our true selves that we share. It is a manufactured self, an artificial ontology.

When we look in the mirror of the selfie, often we are seeing not what we are, but what we want to be. And it is that aspiration that we share with others, with the full intention to deceive. To make others, at least, believe that we are as we would like to be: carefully curated, filtered, posed, and polished—no matter how spontaneous it may appear.

And few of us likely stop to think that in sharing our pretenses we may be revealing our selves more nakedly than we ever could without all that artifice.