My protesting isn't terrorism: How Big Ag teamed with lawmakers to criminalize speech

Activists are being prosecuted for challenging the interests of business. I should know — I spent 40 months in jail 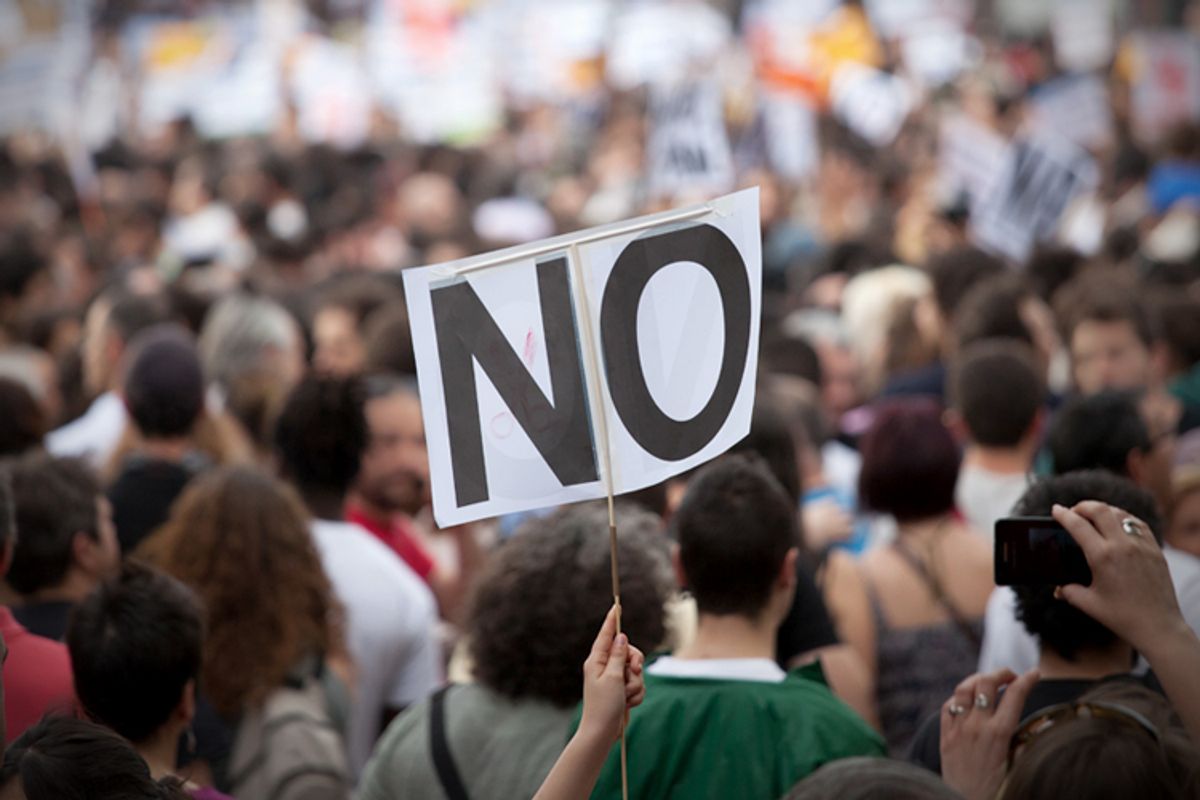 Twelve years ago, I was indicted in Massachusetts for a chant that I used during a protest outside the Boston home of an executive who worked for Marsh Inc. Four times, during a single 10-second period in the course of a demonstration that lasted two hours, I said, “What goes around, comes around,” to which other protesters replied, “Burn his house to the ground.” Ultimately, this chant would land me in prison for years.

At the time of the protest, Marsh Inc. was providing insurance brokerage services to Huntingdon Life Sciences (HLS), a notorious animal testing lab that had been exposed in multiple undercover investigations abusing animals. I was part of a global, grassroots campaign that sought to pressure HLS’s business affiliates to sever ties with the lab and, ultimately, close it down.

Leading the chant that day was not my finest moment.  I didn’t really want the executive’s house to be burned down, and I didn’t even care much for the chant myself. I started it on a whim and didn’t think about it again for months.

Police and private investigators were present and filming the protest, and, as a court later noted, the police were “seemingly unconcerned.” The video footage shows me instructing fellow demonstrators to stand off the curb, so as to comply with an injunction that required protesters to stay at least 13 feet away from the executive’s property. The footage also shows me putting away a megaphone after a police officer told me I needed a sound permit in order to use it. I was not arrested. But months later, I received indictments in the mail charging me with threats, extortion and conspiracy to commit both. I faced 28 years in prison.

I was under indictment in Massachusetts for 15 months, until a Superior Court judge dismissed the case on First Amendment grounds. The court “conclude[d] that none of [the statements allegedly made by the defendants] constitute the kind of threat the Supreme Court has required in order for the speaker to be prosecuted criminally.”

Three months later I was indicted in New Jersey, along with six others, on “animal enterprise terrorism” charges for campaigning to close HLS. In 2006 I was convicted, and in 2009 the Third Circuit Court of Appeals affirmed my conviction, based almost entirely on the chant I used at the 2002 demonstration in Boston. The court held that, coupled with my general leadership of the Stop Huntingdon Animal Cruelty campaign – namely,  publishing a website that advocated and reported on protest activity against HLS –  the chant constituted a threat. (This was not double jeopardy, because a person can be charged at both the state and federal levels for the same conduct without violating the Constitution.) In stark contrast to the Boston court, the Third Circuit said, “We find it hard to see how threatening to burn down someone’s house… might be protected by the First Amendment.” I served 40 months in federal prison.

A ruling last month by the First Circuit Court of Appeals in Boston leaves the door open for protesters like me to be prosecuted as terrorists. The decision affirmed a lower court’s dismissal of the Center for Constitutional Rights case challenging the Animal Enterprise Terrorism Act (AETA) as a violation of the First Amendment. I am a plaintiff in that case, Blum v. Holder.

The AETA was pushed through Congress by the immensely powerful animal agriculture, animal testing and fur industries. The law is not limited to punishing illegal activity; numerous existing laws already punish vandalism, threats and other illegal forms of protest. Rather, the AETA provides special protection to a specific class of businesses by targeting and stigmatizing a particular group of protesters, hanging the specter of prosecution as “animal enterprise terrorists” over their heads, and ultimately scaring them into silence.

The plain language of the AETA allows for a terrorism prosecution when a person purposely “causes the loss of any real or personal property,” which includes profits, to a business or other institution that uses or sells animals or animal products — whether the loss is caused by peacefully coordinating a boycott or burning a business to the ground. In affirming the lower court’s dismissal of the case, the First Circuit relied on language in the AETA that states, “[n]othing in this [law] shall be construed to prohibit any expressive conduct … protected from legal prohibition by the First Amendment to the Constitution.”

In the face of these inconsistencies, many animal rights activists have limited or even ceased their lawful advocacy out of fear of being prosecuted as terrorists. Under the First Amendment, this is known as a chilling effect, and it is certainly unconstitutional.

Activists should not have to be First Amendment scholars to know whether their activity is protected by the First Amendment or chargeable as terrorism. I recently completed studies for an interdisciplinary Master’s degree in the Law, History, and Philosophy of Free Speech and the First Amendment, so I am intimately familiar with what First Amendment law says is and is not protected speech — including the fact that lawyers, scholars and courts themselves often fiercely debate this question. But my own experiences have driven home the vagaries of First Amendment protection in practice. In Massachusetts, my indictments were tossed; in New Jersey, I ended up spending years in prison for the very same speech. I am left still not knowing whether I can speak out and avoid prosecution under the AETA, as are countless other activists.

That’s why the Center for Constitutional Rights (CCR) has filed for a rehearing of its AETA challenge by the full Court of Appeals. I joined Blum because I read the statute to punish expression and activity protected by the First Amendment and because, as the court wrote when dismissing my earlier Massachusetts case, “when a criminal prosecution targets speech, the mere fact that a prosecution is instituted, without the improbability of its success, has a chilling effect upon the exercise of First Amendment rights.” The prosecutions against me certainly have.  The First Circuit’s ruling is wrong, because, at the end of the day, it is simply not enough for Congress to proclaim, This statute doesn’t violate the Constitution.