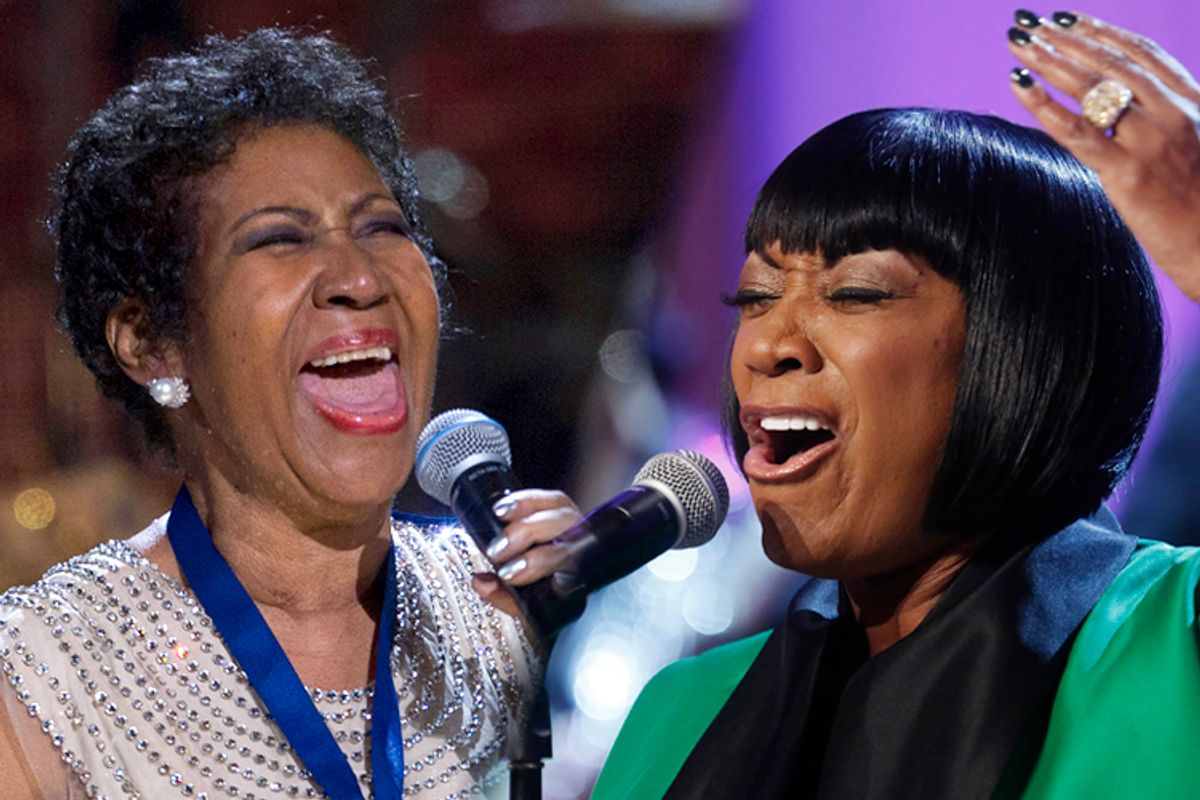 You either heard it through the grapevine, or saw it on Vine. The 11-second gif of Aretha Franklin supposedly throwing shade at Patti LaBelle — LaBelle reaching out to Franklin, Franklin curtly withdrawing her hand — was perhaps the most memorable moment at last month’s “Women of Soul” concert, sponsored by Michelle Obama. It seemed to encapsulate the legendary rivalry between the soul-music doyennes. And yet the mainstream media paid little attention to it; the shade-throwing footage was cut from PBS’s final broadcast. Since the concert, that moment has lived in infamy in one specific place: black gossip blogs. Ms. Franklin and Ms. LaBelle are essentially royalty on these websites, where much of the goofy-spectacular minutia of black celebrity life is diligently chronicled. In a media landscape that often ignores such incidents, blogs written specifically for black audiences have come to serve as repositories of contemporary black culture.

Before long, the alleged LaBelle-Franklin feud had blown up into a different story entirely. Headlines began cropping up all over culturally black Facebook and Twitter feeds: “Patti LaBelle Arrested After Fist Fight With Aretha Franklin.” This wasn’t a tease for yet another reboot of MTV’s "Celebrity Deathmatch." It was a satirical article from the news parody site The News Nerd, building on the storyline that began with the gif at the White House. It was re-posted and shared again and again, accompanied by commentary that ranged in tone from amused to offended. “Mane,” one of more than 100 commenters, remarked: “I would like to believe these two are more professional than this. Patti, if Aretha does not want to acknowledge you, forget it and tell her ‘You are my friend.’” The intense fandom both women enjoy online is not wholly unique to blogs like Funky Dineva, That Grape Juice, Madame Noire, Bossip and The Young, Black, and Fabulous, to name a few, but they serve as the most visible contemporary chronicles of this corner of cultural history. You certainly won’t see Perez Hilton or TMZ breaking down the gritty details of this celebrity feud.

Online audiences tend to engage with pseudo-stories like the Franklin-LaBelle duel not because they’re unable to pick up on the subtleties of satire, but because there is a dearth of detailed coverage on cultural happenings outside of Black Twitter and the blagosphere. (No portmanteau has yet been coined for black blogosphere, as far as I know, so here’s one. After all, where else but the blagosphere would a “beef” between older black female stars of yesteryear be analyzed as if they were Nicki and Mariah? There’s a reason Chimamanda Ngozi Adichie made the protagonist of her latest award-winning novel “Americanah” a blogger. The BET Awards, The Trumpet Awards and Black Girls Rock! each happen once a year. But the blogs are a constantly evolving public record.

The interest-specific blogs often have the strongest editorial voices, even though they don't all cater specifically to black audiences. If you want to read about black film culture across the diaspora, you can go to Shadow and Act. For natural hair care and transitioning tips, there’s Curly Nikki or Natural Chica. Soulbounce offers viewpoints from the U.S. and the U.K., and concerns the mellifluous range of vintage and contemporary R&B and Soul. For Harriett and Crunk Feminist Collective feature woman-centered discourse, while PostBourgie and Colorlines cover news and culture with an eye for intersectionality. WorldStarHipHop caters to those looking for a dash of ratchet with their morning cup of haterade. The Freedwoman’s Bureau, by Sharifa Rhodes-Pitts, and 500 Days Asunder, by Rembert Browne, were both insightful blogs that turned a personal lens on art, history, literature and pop culture. Black Girl Dangerous and Saeed Jones’s For Southern Boys Who Consider Poetry provide queer perspectives on literary, LGBTQ, and pop culture-specific issues. This blogroll is by no means exhaustive. The sheer number of black voices online is extensive, an array as wide as the rainbow Patti LaBelle elegized at the White House.

On YouTube, LaBelle’s dubbed-over alter ego, Patti LaHelle, has a popular vlog that nicely captures the self-awareness of the blagosphere. Her cult-hit parody webseries Got 2B Real, although not technically a blog, simultaneously critiqued, lampooned and honored the divas of yesterday and today. The barbs these “divas” hurl at each other are hilarious — and wholly insular. Like Got 2B Real, the gossip blogs provide an opportunity for online audiences to engage with the public historicization of their stars. The LaBelle-Franklin “feud” predates the Internet (my mom, who is not a regular Internet user, has her own theory on the supposed tiff), and allows black audiences to participate in the process of creating and reimagining their folk heroes. The "blagosphere," needless to say, can be a trifling hotbed of hair-trigger vitriol. There are pockets of unmoderated rage, just as there are in plenty of other places online. And yet the particular ways in which the Franklin-LaBelle “feud” is processed and imagined on these sites should not be lost just because the feud itself may be imagined. In the absence of the porch culture Zora Neale Hurston famously described in “Their Eyes Were Watching God,” the gatherings that supported black secular fellowship, and because of the online content revolution, black blogs offer a revival of that bygone culture-specific camaraderie.

In the foreword of the 2007 edition of her novel “Sula,” Toni Morrison spoke to the joy black female artists of the ’70s found in creating things without the white and male gazes over their shoulders: “Nobody was minding us, so we minded ourselves.” This ethos seems to preside over the blogs analyzing the black American zeitgeist. It might be useful to keep this in mind if you happen to see a News Nerd headline like “Beyoncé Church ‘National Church of Bey,’ Responds to Criticism”, that doesn’t quite seem like an Onion article or real news. It makes sense to some of us.