CNN is its own disaster: How a perversely immature news channel blew its opportunity

Fox News and MSNBC have given the network an open field in which to run. This is what it's done instead 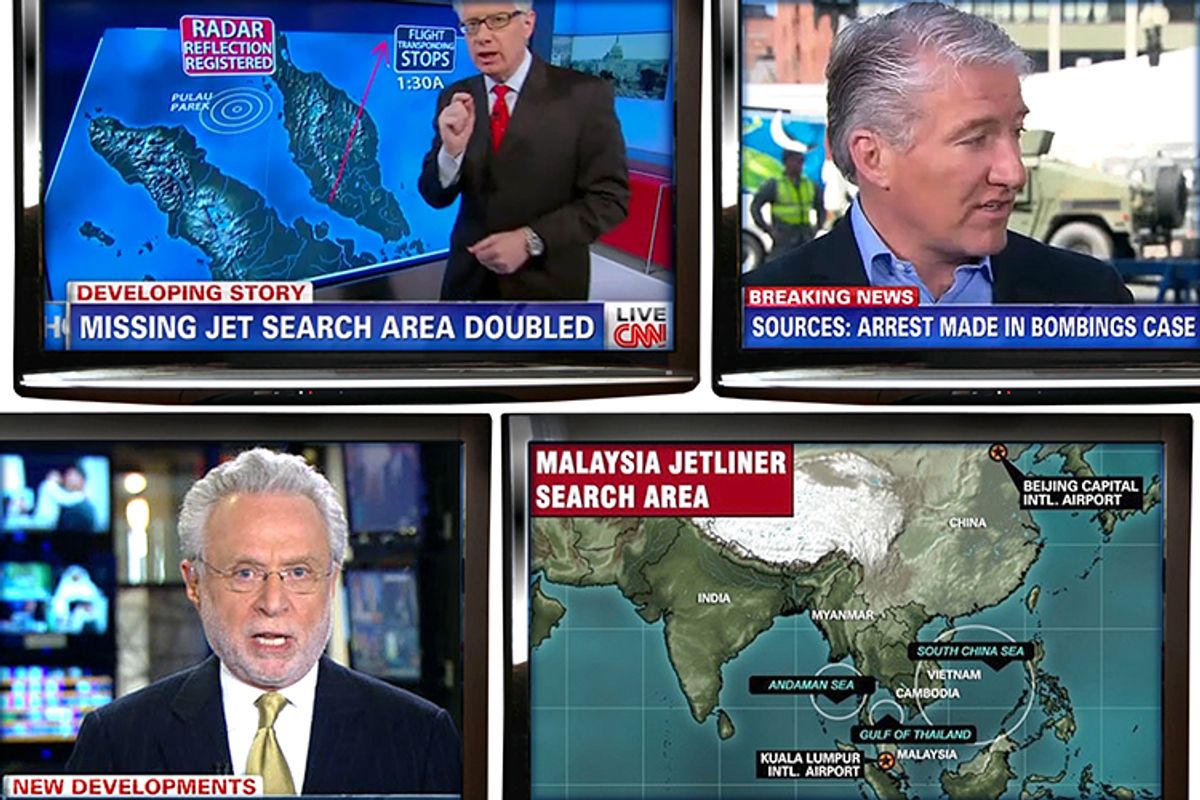 A month after its launch, on June 29, 1980, the New York Times reviewed Ted Turner’s embryonic cable channel. It was a fairly positive write-up, in which the critic presciently identified the outfit’s bread and butter. “It is evident so far that disasters are perhaps the best news the network can hope for,” he wrote. “Volcanoes, airplane crashes and riots are ideally suited to CNN’s gritty, live coverage.” For CNN, he continued, “disasters offer a justifiable means of filling time.”

It’s hardly news anymore that CNN has gone all in on Malaysia Airlines Flight 370, which vanished on March 8. Jon Stewart succinctly summed up the coverage as “occasionally pointing at shit and wondering what it is." It ought to be said that the disappearance of the plane, while tragic, is not of great geopolitical or economic significance. Should the plane be found, Malaysia will not invade Iraq or Afghanistan. The country will simply grieve.

And yet here we are, more than six weeks later — during which time very little progress has been made on the search — and CNN’s home page appears stuck in amber:

Perhaps in preparation for the day Flight 370 is found — and ceases to be of interest — CNN has moved on to a fresher, equally horrific hobbyhorse, the capsized South Korean ferry. (The network seems to have a thing for exploiting Asian fatalities for fun and profit.) The incident has given CNN enough material for innumerable stories, including a segment asking: Was South Korean “culture” to blame for the demise of the passengers? (Spoiler: It was not.) A few days later, in what I hope is the nadir of this coverage, an anchor named Rosa Flores chose to fill airtime by giving viewers a horrifically inadequate approximation of what it would be like to be trapped in a sea vessel and drown. “This is a full-blown ship simulator!” squealed Rosa Flores.

The great perversity is that CNN, with revenue of about $1 billion last year and profits of approximately $200 million, could be an effective purveyor of news. It’s not as if there is no precedent for a cable channel doing just that. Al Jazeera America, for example, has been exceptional. Outside of maybe the Guardian, no news organization in the world has done a better job of keeping viewers abreast of what’s going on. (Alas, AJAM has not so far been a commercially successful venture.) And CNN should, in theory, have an open field in which to run. Fox, as is often said, is the public relations arm of the Republican Party (or, as Gabriel Sherman has magnanimously put it, “a political machine that employs journalists”) and MSNBC is largely devoted to commentary. Meanwhile, CNN maintains "by far the largest bureau system among the three major news channels.”

What has CNN done with this opportunity? It has chosen to treat the second word in its name as vestigial. “The goal for the next six months,” Jeff Zucker announced late last year, “is that we need more shows and less newscasts.” Zucker helped this along by firing 40 reporters in January. That he was rumored to be wooing Jay Leno was, while sad, not surprising.

This strategy has been grotesquely effective. The coverage of Flight 370 — to the exclusion of pretty much all else — has been good for ratings, good for the bottom line and a snug fit within the new editorial framework. As a CNN executive bragged to the Times, “It is a tremendous story that is completely in our wheelhouse.” That this coverage is in CNN’s wheelhouse is, I’m sure, a great comfort to the families of the dead passengers.

A review of CNN’s history shows that it never really matured. Despite the occasional bright spots — the first Gulf War, for example, when the network remained in Baghdad, against the wishes of President Bush — Turner’s baby never really outgrew that diet of “volcanoes, airplane crashes and riots.” It is fitting that the seminal, early events in CNN’s history were 18-month-old Jessica McClure’s fall down a well in Midland, Texas, and the Challenger disaster.

So, not much, save for perhaps the locations and ethnicities of the victims, has changed. This stasis strikes me as an abdication of responsibility. The first rule of any news organization should be to leave the reader, listener or viewer smarter and better informed than you found them. CNN, with all its resources, does not meet even this basic standard. And, by all accounts, they’re just fine with that. Viewers should not be.