America deserves better superheroes: Why a straight, white Spider-Man is no longer a real underdog 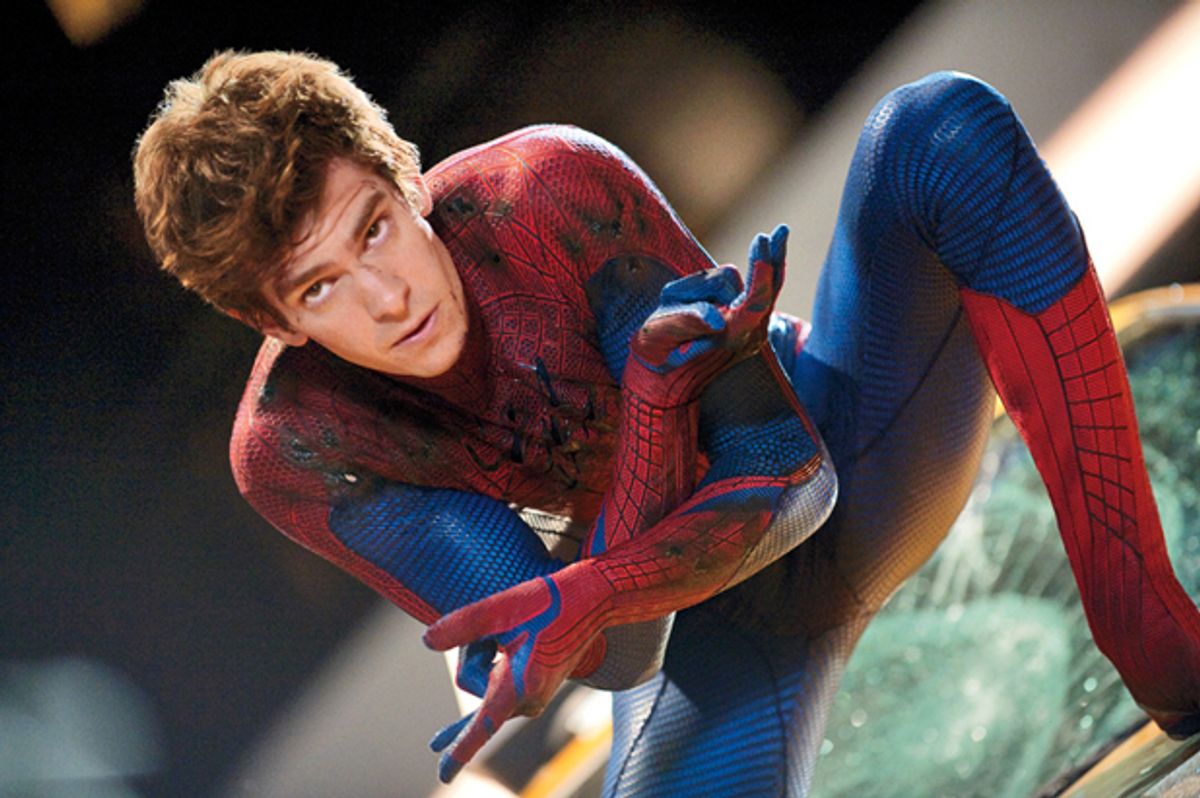 The most common criticism of the Amazing Spider-Man movies is that with the original Spider-Man trilogy so fresh in people’s minds, a reboot seems kind of... redundant.

This isn’t the revitalization of an aging franchise like J.J. Abrams’ Star Trek or Christopher Nolan’s Batman. With just five years between Spider-Man 3 and The Amazing Spider-Man, it’s no surprise that fans were hoping for a few more changes between the original and reboot versions. There’s no better example of this than the 2010 campaign for Donald Glover to be cast as the first black Spider-Man.

Of course, the role eventually went to Andrew Garfield, but the point had already been made: Sony had given the impression of being so resistant to change that it hadn’t even considered allowing non-white actors to audition for the role.

The good news is that Andrew Garfield does seem sensitive to the ramifications of having eternal underdog Peter Parker remain a straight, white man. Last year, he made this offhand comment during an interview with Entertainment Weekly, wondering why Peter Parker couldn’t be bisexual:

“I was like, ‘What if MJ is a dude?’ Why can’t we discover that Peter is exploring his sexuality?  It’s hardly even groundbreaking! So why can’t he be gay? Why can’t he be into boys?”

Amazing Spider-Man director Marc Webb quickly dismissed this idea, but Garfield pressed on, mentioning Michael B. Jordan (soon to be starring in the Fantastic Four reboot) as a possible actor for the role of Peter Parker’s boyfriend. During a panel at San Diego Comic Con, Garfield went into more detail about his thoughts on the idea of a bisexual Peter Parker, explaining that while the questions he put across during the EW interview were “philosophical” rather than literal, it was worth thinking about in order to maintain the integrity of Spider-Man in the present day.

“He represents the everyman, but he represents the underdog and those marginalized who come up against great prejudice which I, as a middle-class straight, white man, don't really understand so much. And when Stan Lee first wrote and created this character, the outcast was the computer nerd, was the science nerd, was the guy that couldn't get the girl. Those guys now run the world. So how much of an outcast is that version of Peter Parker anymore? That's my question.”

This debate has been raging among comics fans for years. All of the big-name superhero movies are adaptations of long-running comics, and because most of those titles were first published sometime in the mid-20th century, their protagonists tend to be straight, white men. In the case of a character like Bruce Wayne, it still makes a certain amount of sense to cast a white guy in a role that represents the conspicuous consumption of real-world billionaires. But is Andrew Garfield’s Peter Parker any kind of representative for the 21st century underclass? Not so much.

This also highlights the current division between Marvel comics and their big-screen adaptations. Marvel movies are often praised for being more progressive than your average summer blockbuster (or DC adaptations like The Dark Knight, if you’re into the DC/Marvel rivalry), but they’re still decades behind the comics. Between Sony’s Spider-Man movies, Fox’s X-Men franchise and Marvel Studios itself, Hollywood is churning out multiple Marvel adaptations every year. And yet so far, none of those movies have starred anyone other than a straight, white man in the lead role. The Avengers franchise has managed a handful of female characters in non-romantic roles, plus Falcon and Nick Fury in the supporting cast, but the mere concept of an openly LGBT character still feels like a pie-in-the-sky dream. Meanwhile in Marvel comics, Northstar came out in 1992, opening the floodgates for a whole host of other LGBT heroes.

Basically, Marvel comics now depict a reasonably progressive and diverse representation of real-life America, while movies like Amazing Spider-Man appear to exist in a parallel universe where everyone is (apparently) straight, and the general population is about 80 percent male. For the sake of comparison, just take a look the new version of Spider-Man introduced by Marvel Comics back in 2011: Miles Morales, a Black/Hispanic teenager who was immediately embraced as a hero for young black and Hispanic readers to look up to.

It’s clear that Andrew Garfield has put a great deal of thought into how Peter Parker should evolve past his current, rather dated state of being an oppressed underdog who is also a straight, white male science genius. There is no logical reason why Mary Jane Watson couldn’t be genderflipped and played by Michael B. Jordan, much as how other characters like Heimdall, Nick Fury and the Human Torch switched races for their movie adaptations.

The only argument against a bisexual Peter Parker is the same one that gets dragged out after any suggestion that there should be a Wonder Woman movie, or a Black Panther movie, or an Asian American actor playing Iron Fist in the new Netflix series: It’s still too much of a “risk” to make a superhero movie with anyone other than a straight, white man as the main character.

So, the chances of Peter Parker coming out in Amazing Spider-Man 3 are more or less nil. Hollywood is yet to produce a big-budget blockbuster with any kind of LGBT character in the lead role, never mind having an established hero come out after decades of heterosexuality. However, Sony might benefit from listening to Andrew Garfield’s comments on the potential hypocrisy of portraying Peter Parker as being marginalized by society.

Considering the fact that white male geeks already have Tony Stark, Bruce Banner, Peter Parker, Reed Richards and Charles Xavier to heroize their nerd cred on the big screen, it’s difficult to argue that they still represent some kind of oppressed minority. It’s probably time to give someone else a chance.