Paul Ryan is a whiny sore loser: Why he's still mad at Candy Crowley for 2012 loss 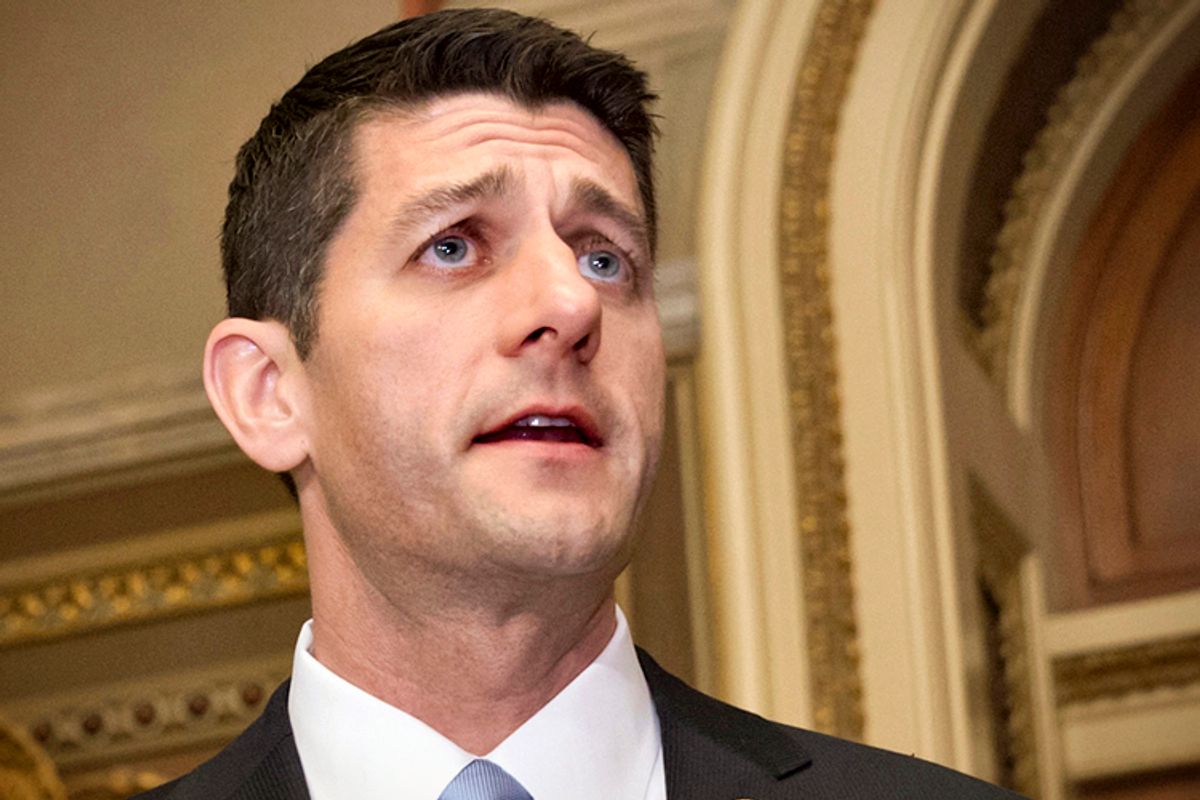 Wow. Rep. Paul Ryan is still complaining about CNN’s Candy Crowley’s 2012 debate moderation. Specifically, about the fact that she corrected Mitt Romney for saying President Obama took 14 days to call the 9/11 attack on the Benghazi compound “an act of terror,” when Obama said those words in the Rose Garden the very day after the killings of four Americans.

Talking to Hugh Hewitt Wednesday night, Ryan rehashed the Crowley moment, agreeing with Hewitt that it was “perhaps the most significant intervention by a member of the media in a presidential campaign ever.” While Ryan wouldn’t speculate about whether Crowley would do anything different if she knew what we know now (more on what we know now, later) he alleged that Crowley “violated the rules of the debate.”

There’s so much to unpack in Ryan’s complaint, but it underscores why Benghazi fever is so rampant in the GOP. There’s a strain of the fever for every type of Republican. Ryan’s not a crazy birther (though he's got some racial issues) or a bomb-thrower; he likes to play the statesman. He’s not a fact-averse “prosecutor” like newly minted Benghazi investigator Trey Gowdy, getting the details of the story wrong every time he opens his mouth.

No, Ryan’s particular strain of Benghazi fever lets him use the faux-scandal to rewrite the results of the 2012 election: If the White House had told the truth, as soon as it was known, Obama wouldn’t have been able to boast about his national security record, and Romney-Ryan would have won the election. It’s an updated version of the “unskewed” polls movement that blinded Republicans, including Ryan and his running mate, to the ticket’s impending loss 18 months ago.

There’s so much wrong with even this relatively moderate strain of Benghazi fever, it’s hard to know where to start. First of all, despite all the ongoing noise about the composition of Susan Rice’s infamous Sunday show “talking points,” there is no evidence the White House hid the unfolding truth about what had happened at the compound (the CIA's role is more murky). And like it or not, there is also no evidence that Americans cared very much about the issue when they cast their votes that November.

It also helps to remember that Romney himself set the stage for the way the Benghazi story unfolded, with reporters and with voters, with his witless and craven attempt to jump in front of the facts and accuse Obama of “sympathizing” with the attackers. Here’s the statement his campaign released the same night as the killings of Ambassador Christopher Stevens and three other Americans:

Romney’s charge was based on a statement from the U.S. embassy in Cairo attacking the anti-Islam video that was inspiring protests across the Middle East (and that was first believed to have sparked the Benghazi attack). The statement came from embassy officials, not from the White House, and it was issued before the Benghazi killings. Reporters challenged Romney on his charge the day after he made it. But Ryan’s running mate doubled down: “When our grounds are being attacked and being breached, the first response should be outrage,” he told reporters. “Apology for America’s values will never be the right course. We express immediately when we feel that the President and his administration have done something which is inconsistent with the principles of America.”

So let’s be clear: Given a chance to focus Americans on the valid questions about what had happened in Benghazi, the Romney-Ryan ticket went for dishonesty and cheap shots. That pattern set the context in which Crowley gently corrected Romney for insisting the president hadn’t called the attacks an “act of terror.” Ironically, Romney himself was accusing Obama of lying when the president said he’d used those very words to describe the attack the day after it happened in his Rose Garden statement. “Get the transcript,” Obama shot back, and that’s when Crowley gently interjected: “He did, in fact, sir.”

That’s what Hewitt calls “perhaps the most significant intervention by a member of the media in a presidential campaign ever.” Ryan and other Republicans would have you believe that’s when they lost the election. By the way, Ryan’s wrong that Crowley “violated” the debate rules. She was honest about never signing off on them in the first place.

This is why Republicans can’t get over Benghazi fever. It’s a symptom of a more deadly disease: the party’s determination to deny Obama legitimacy. If he lied to get reelected, he didn’t really win at all. They don’t have to reckon with the truth that voters rejected the soulless Romney, who would say anything to get elected, and his running mate, the allegedly principled and wonky Ryan. In the end, he had to hide his unpopular budget ideas to face the voters, turning out to be as craven as Romney.  It’s not really a surprise that he’s blaming Crowley for his troubles, but it’s disturbing nonetheless.