The Bible backs same-sex couples: Point by point, why conservatives are wrong

I was taught the Bible condemned same-sex relationships. So I spent years with the text, and that's simply not true 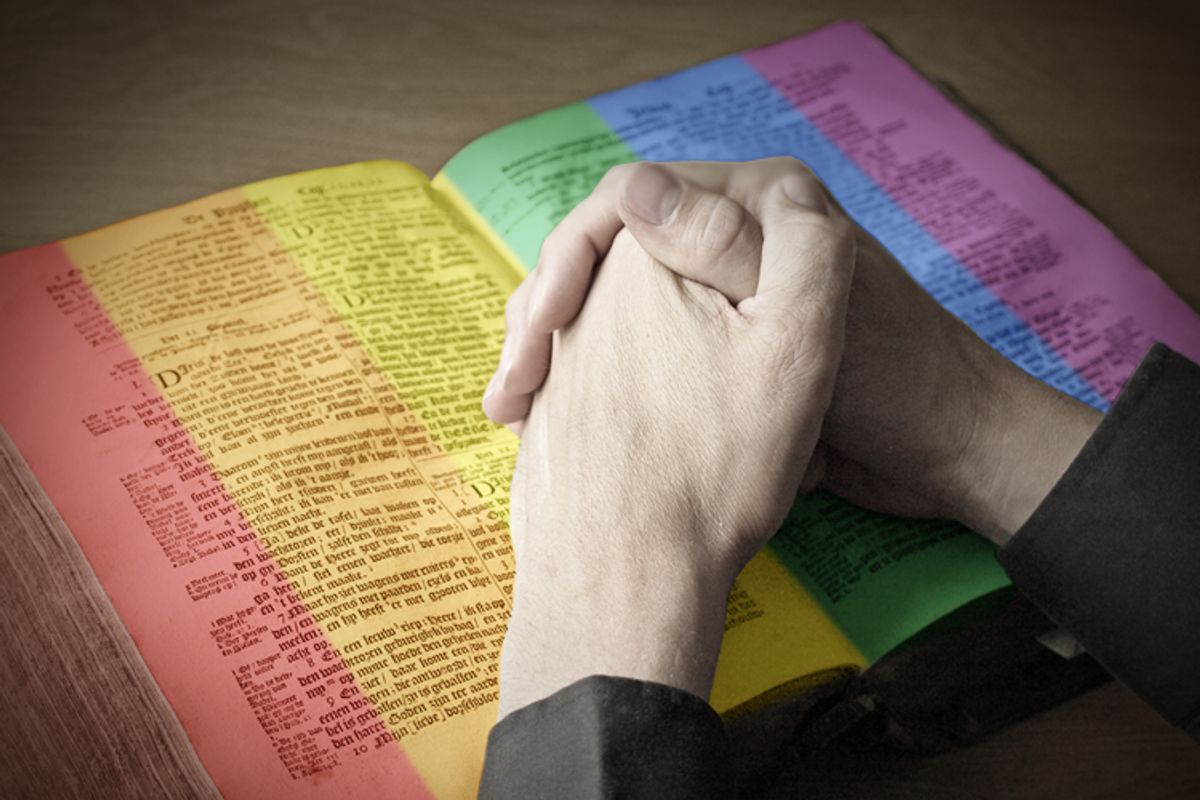 Excerpted from "God and the Gay Christian: The Biblical Case in Support of Same Sex Relationships"

If the essence of marriage involves a covenant-keeping relationship of mutual self-giving, then two men or two women can fulfill that purpose as well as a man and a woman can. But is lifelong commitment between two adults sufficient for realizing a Christian basis for marriage? Or is there something unique about heterosexual relationships that prevents same-sex couples from truly illustrating Christ’s love for the church?

The first response one might make based on Ephesians 5 is that same-sex unions are necessarily excluded from a Christian basis for marriage because Scripture uses only heterosexual language when describing it. But given the widespread association of same-sex behavior with lustful excess in the ancient world, it isn’t surprising that the biblical writers didn’t contemplate the possibility of same-sex marriage. Our question isn’t whether the Bible addresses the modern concepts of sexual orientation and same-sex marriage. We know it doesn’t. Instead, our question is: Can we translate basic biblical principles about marriage to this new situation without losing something essential in the process? We need to determine, from a biblical standpoint, whether the essence of Christian marriage permits the inclusion of same-sex couples, or whether it necessarily involves the union of a man and a woman.

We know covenant keeping is essential to Christian marriage. But is gender difference between the spouses also essential?

The Call to Procreate

One reason many non-affirming Christians believe gender difference is essential to marriage is the obvious one: Only a man and a woman can biologically procreate. In Genesis 1:28, after verse 27 says that God created humanity “male and female,” we read: “God blessed them and said to them, ‘Be fruitful and increase in number; fill the earth and subdue it.’ ” Since same-sex couples cannot increase in number through biological procreation, does that prevent their relationships from fulfilling the Bible’s basis for marriage?

From a strictly Old Testament perspective, that position has some merit. In Genesis 12–17, God established his covenant with Abraham. He promised to make Abraham “into a great nation” and to bless him with offspring as numerous as the stars in the sky (see Genesis 12:2; 15:5). When God reaffirmed this covenant with Isaac (see Genesis 26) and Jacob (see Genesis 28), he again emphasized his promise of physical offspring.

In the Old Testament, God was understood to extend his covenantal blessings to Israel primarily through biological procreation. The fear of having his name blotted out is why Saul pleaded with David, “Now swear to me by the Lord that you will not kill off my descendants or wipe out my name from my father’s family” (1 Samuel 24:21). That fear also explains the reaction of Jephthah’s daughter in Judges 11, when she learned she would be sacrificed. She asked her father for two months to weep with her friends. But she didn’t ask to weep because she would soon die, but because she would never marry (see Judges 11:37– 39). The emphasis on procreation also led to the marginalization of infertile women and eunuchs. Eunuchs were actually barred from entering the assembly of the Lord (see Deuteronomy 23:1).

But the life, death, and resurrection of Jesus ushered in a host of transformative changes, and one of those changes is vital to our conversation here: Biological procreation no longer determines membership in God’s kingdom. Spiritual rebirth through faith in Christ does.

Under the old covenant, one could simply be born into the people of God. But as Jesus explained to Nicodemus, under the new covenant, “no one can see the kingdom of God unless they are born again” (John 3:3). In the words of John Piper, God’s people are now “produced not by physical procreation but by spiritual regeneration.”

This change in how the kingdom of God is built has had lasting consequences that pertain to our discussion of same-sex marriage.

First, marriage and procreation are no longer seen as the necessary ways of growing God’s family.

Second, lifelong celibacy is a valid option for Christians, even though it generally wasn’t for the ancient Israelites.

Third, the definition of family has changed for Christians.

Jesus was preaching to a crowd when his mother and brothers showed up, asking to speak with him. He responded by saying, “Who is my mother, and who are my brothers?” Jesus pointed to his disciples and said, “Here are my mother and my brothers. For whoever does the will of my Father in heaven is my brother and sister and mother” (Matthew 12:46–50).

That shift in understanding is reflected when we call one another a “brother in Christ” or a “sister in Christ.” Relationships in Christ are more enduring even than bonds between biological family members. Jesus emphasized that the bonds shared by spouses and members of biological families are temporary because they will not exist in eternity.

The New Testament’s focus on personal faith rather than procreation has another important consequence: Even a celibate person can become a spiritual parent by bringing others to faith in Christ. Isaiah foreshadowed this development: “ ‘Sing, barren woman, you who never bore a child; burst into song, shout for joy, you who were never in labor; because more are the children of the desolate woman than of her who has a husband,’ says the Lord” (Isaiah 54:1).

So, too, eunuchs now have reason to rejoice. Isaiah quoted God as saying, “To the eunuchs who keep my Sabbaths, who choose what pleases me and hold fast to my covenant—to them I will give within my temple and its walls a memorial and a name better than sons and daughters” (Isaiah 56:4–5). In Christ, that prophecy is fulfilled. The first Gentile convert to the faith was likely none other than an Ethiopian eunuch (see Acts 8:26–39).

Is Procreation a Fixed Standard in Marriage?

You may be wondering: Even if procreation is no longer expected of all God’s people, is it not still expected of all married couples? Does sex, in order to be moral, need at least to offer the possibility of reproduction?

In the original creation story, procreation is not presented as the primary purpose of marriage. While Genesis 1:28 does say to “be fruitful and increase in number,” Genesis 2 never mentions procreation when describing the first marriage. And despite the significance of procreation in the Old Testament, infertile marriages were not considered illegitimate. The marriages of Abraham and Sarah (see Genesis 18) as well as Elkanah and Hannah (see 1 Samuel 1) were valid even in the long years before they had a child. In the New Testament, too, Jesus may have made one exception to his prohibition of divorce, saying a couple could divorce in the case of infidelity (see Matthew 19:9). But he made no exception for couples who are unable to bear children. In Jesus’s understanding of marriage, covenantal commitment is foundational. The ability to bear children is not.

From a theological perspective, marriage primarily involves a covenant-keeping relationship of mutual self-giving that reflects God’s love for us. The evidence we’ve considered here indicates that marriage is only secondarily—and not necessarily at all—about having biological children. Same-sex couples’ inability to procreate does not exclude them from fulfilling the Bible’s basis for marriage.

The matter of gender hierarchy

While Ephesians 5 doesn’t mention married couples having children, it does mention—or at least assumes—gender hierarchy. It calls a man the “head” of his wife just as Christ is the head of the church, and wives are told to submit to their husbands in the same way the church submits to Christ. But same-sex couples can’t live out that dynamic. So does the hierarchical aspect of marriage as described in Scripture mean marriage must be between a man and a woman?

This question brings us back to this big-picture idea: Is the Bible’s reflection of patriarchy normative for Christians, or is it limited in a way similar to Scripture’s accommodation of slavery? We saw before that ancient societies didn’t simply uphold differing roles for men and women; they accorded women inferior value.

Few, if any, Christians today would endorse the degrading views of women that shaped the world of Leviticus. However, many Christians do hold beliefs about gender relations that could be summed up as “equal value, different roles.” That’s the kind of hierarchical gender complementarity often reflected in distinct gender roles in marriage. In that view, husbands act as the leaders and wives as their followers. As long as spouses affirm the equal value of both genders, might we conclude that such an approach to gender relations is consistent with the New Testament vision of relationships free of patriarchy? Let’s look into that question.

In his letter to the Galatians, Paul wrote that three types of hierarchies would fade away in Christ. The first two were distinctions between Jew and Gentile and distinctions between slave and free. The third was that of male and female. Paul’s main concern at the time was ending the division between Jews and Gentiles, and Galatians 3:28 is focused on our ultimate status in Christ, not our present status in society.

But in the Sermon on the Mount, Jesus tells us to pray that God’s kingdom will come “on earth as it is in heaven” (Matthew 6:10). In opposing slavery, Christians in the nineteenth century took that message to heart. Since there won’t be a distinction in God’s kingdom of slave and free, Christians decided to abolish the inhumane institution of slavery in the West.

But what does that have to do with the requirements of marriage?

Just this: Christians did not work for change so that slaves would be regarded as having equal value while maintaining a subordinate status and role in society. They chose to abolish the subordinate status altogether. While slavery remains a tragic reality in much of the world, the church now uniformly opposes it.

Given that Paul in Galatians connected the issues of slavery and gender hierarchy, we should as well. The New Testament explicitly links the submission of slaves to the submission of wives. First Peter 3:1 begins, “Wives, in the same way [that slaves are to submit to their masters] submit yourselves to your own husbands...” The comparison comes from the instructions given in 1 Peter 2:18–25. Peter told wives to submit to their husbands in the same way slaves were instructed to submit to masters.

Yet both hierarchies will fade away in Christ, and Jesus calls us to make that a reality now. Scripture lays the groundwork for a redemptive reordering of gender relations in God’s kingdom, so gender hierarchy can’t be said to be essential to marriage. Even if, when a man and a woman marry, they don’t have a hierarchical relationship, no one claims their marriage is invalid on that basis. Acceptance of these marriages indicates that, even with opposite-sex spouses, gender hierarchy isn’t part of the essence of Christian marriage. In keeping with the focus of Ephesians 5, the essence of Christian marriage involves keeping covenant with one’s spouse in a relationship of mutual self-giving. That picture doesn’t exclude same-sex couples.

Excerpted from "God and the Gay Christian: The Biblical Case in Support of Same Sex Relationships" by Matthew Vines. Published by Convergent Books. Copyright © 2014 by Matthew Vines. Reprinted with permission of the publisher. All rights reserved.