They all believe the same right-wing trash. But there's a whole lot of money at stake in how they get the job done 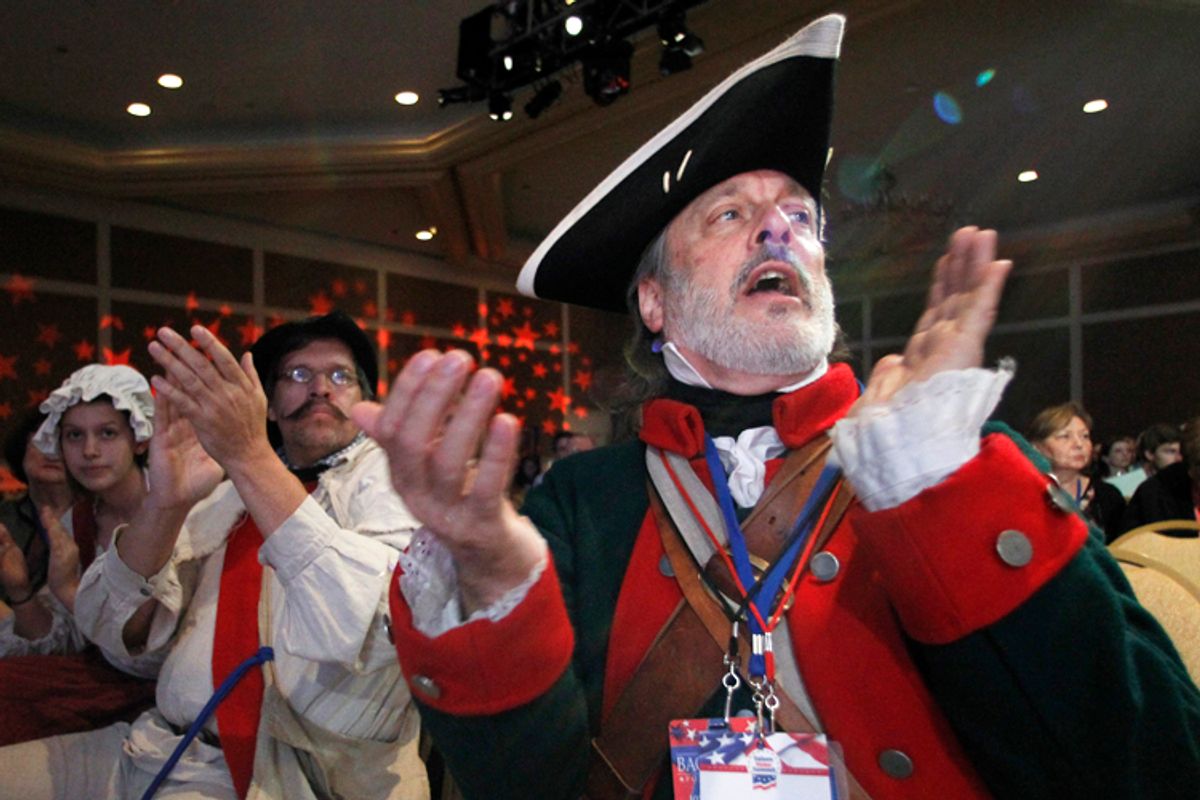 According to the New York Times the Tea Party is very upset. I know. Stop the presses, right? They are always yelling at someone to get off their lawns. But this time, they seem to be upset at ... themselves. Or more precisely, the modern conservative movement, which rebranded itself as the Tea Party in the wake of George W. Bush's epic failure of a presidency. For instance, in Nebraska they don't seem to know whether they're coming or going:

Mr. Osborn, who has the support of activists in the state, secured a major endorsement last November from FreedomWorks, the organization that helped vault the Tea Party to prominence. Mr. Osborn, the group said, stood “with the grass-roots uprising before it was cool.” But in March, FreedomWorks rescinded its support of Mr. Osborn and backed Mr. Sasse.

“We are not million-dollar Washington, D.C., special interest groups with strong ties to Capitol Hill. We are simply Nebraskans who are fed up,” a group of 52 activists wrote in an open letter protesting FreedomWorks’ about-face, adding, “We were not consulted, polled, or contacted by these Washington, D.C., groups.”

Evidently, some of the activists on the ground took the notion that the Tea Party was a true bottom up grass-roots movement seriously. (Bless their hearts.) And come to find out there are a whole bunch of big D.C.-based professionals who don't care much what they think about anything. Turns out the town hall-crashing, tricorn hat-wearing, Gadsden flag-waving patriots were just a convenient means to an end.

But then they shouldn't be entirely surprised, should they? Did they think those groups like Club for Growth and Freedomworks sprang up out of somebody's basement in Dubuque? Surely they looked up Club for Growth on Wikipedia and found out that Stephen Moore, the founder, had been around D.C. politics for a very long time:

From 1983 through 1987, Moore served as the Grover M. Hermann Fellow in Budgetary Affairs at the Heritage Foundation. Moore also was a fellow of the Cato Institute, a libertarian think tank.

Moore was the senior economist of the U.S. Congress Joint Economic Committee under Chairman Dick Armey of Texas. There, he was also an architect of the Armey flat tax proposal in 1995. He was also part of the research team hired by Americans For Fair Taxation to create the FairTax, the most co-sponsored tax reform proposal in Congress.

And where did chairman Dick Armey end up? Freedomworks. (He famously left the group in a huff after the 2012 election, pocketing an $8 million payout --- the result of infighting within the group, naturally.) Meanwhile, who is heading up Club for Growth these days? Chris Chocola, well-connected former Republican congressman from Indiana.

This is not to say that these people don't sincerely believe in the same principles espoused by the Tea Party activists. They do. The believe in low taxes and no regulation and repealing Obamacare. They hate welfare and believe with every fiber of their beings that the 47 percent are a bunch of parasites. In fact, the only issue that separates them is this crazy idea of having "the people" choose who they want to represent them. That's where it gets dicey.

These conservative movement professionals understand power and how to use it, whether in the minority or the majority. In fact, they are as effective in the former as they are in the latter. They don't choose candidates who can "win" simply for the sake of winning. They are building their hardcore conservative faction within the Congress. That's their point of leverage within the party and it's from that leverage their power derives.

Take, for example, the various shows of strength we've seen over the past couple of years as they managed to hold the debt ceiling hostage, force through draconian spending cuts at exactly the wrong time and even shut down the government. The political establishment would have preferred to cut deals more quietly, maybe get a little earmark taste for a few die-hards, keep things  a bit more civilized.  But the radical right faction in the House flexed its muscle and insured the party would dance to its tune. That's serious political power and it's not something that comes about from foolishly allowing the rubes to pull the levers.

These movement professionals don't need to win races to exert their influence. They only need to scare incumbents and establishment pols into doing their bidding. They would prefer that their candidates, win or lose, aren't badly vetted grass-roots kooks like Todd Akin or Christine O'Donnell, if they can help it. What they prefer are far-right radicals who don't look too crazy. People like themselves -- professionals.

It's fine for a Tea Partyer to run around the mall dressed up like Martha Washington spouting platitudes about freedom. But in order to please the right people (the Big Money Boyz) and get the job done (cut those taxes) the candidates need to be able to tell the difference between playing to the rubes and getting down to business. There is a whole lot of money at stake -- for the political pros especially -- so it's important that they make those choices as much as possible. Democracy is just another product for these people.