Why did Gingrich criticize Rove's indelicate comments about Hillary? It's all about hardcore partisan politics 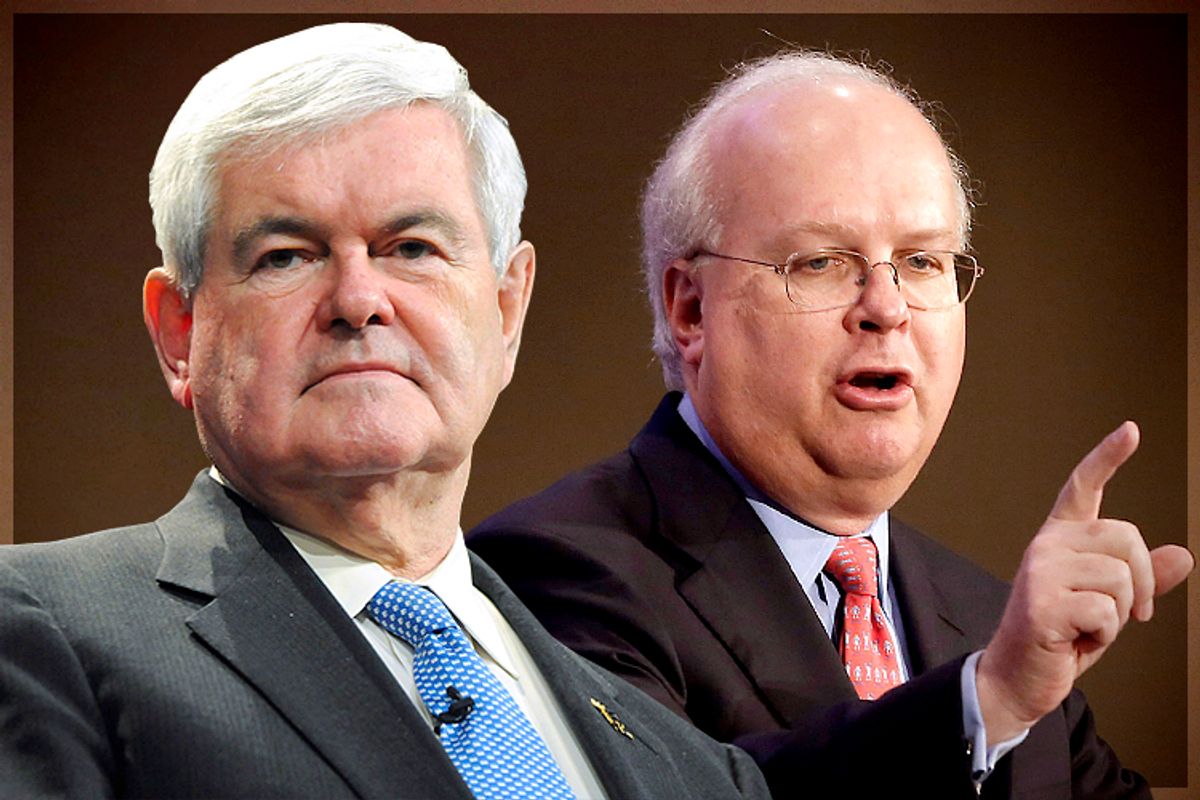 One might have thought that Karl Rove's "Hillary had brain damage" story had served its primary purpose of putting the political media on notice that this juicy morsel was going to be on the menu and so it would be put aside to be brought up at a later date. However,  it seems to have opened up some very creative lines of thought among the right-wing intelligentsia. Over at National Review Jim Geraghty made this macabre observation yesterday:

[I]f Republicans had to pick a Democrat to win in 2016 ... one can easily imagine more formidable opponents in the Oval Office than a then-69-year-old who suffered a blood clot that could, in more dire circumstances, “have killed her, or caused severe brain damage, if it had gone untreated.”

He then goes on to excitedly speculate about all the potential attack lines based upon her age and allegedly declining mental faculties:

Clinton’s four years of constant travel and stress at the State Department left her appearing exhausted; it’s hard to imagine that the daily grind of one of the world’s toughest jobs would leave her appearing and feeling rejuvenated and energetic. As president, Hillary would live in the spotlight nearly 24-7, and every run-of-the-mill misstatement, memory slip, or loss of balance could (and probably would) be interpreted as a sign of a major health issue. President Hillary Clinton’s health would be a constant distraction, even if she were in perfect health for a woman in her 70s.

You can practically see him rubbing his sweaty hands together and cackling with glee.

Coming from the party that has deified the oldest president in our history it's a particularly rich line of reasoning, but Republicans have never been ones to let a little hypocrisy stand in the way of a good character attack.

The very fair and balanced Fox News anchor Chris Wallace acknowledged that was a savvy move:

My guess is, even if he knows that there’s no indication that she has brain damage, he probably is laughing himself to sleep at night thinking, 'Well, I got the Clintons on the front page and she’s a target now, and that’s kind of what I want to accomplish right now."

That would be a perfect example of "Cokie's Law," named (by me) after Cokie Roberts who, referring to a disputed quote from Hillary Clinton during the Monica Lewinsky scandal, famously said:

"At this point, it doesn't much matter whether she said it or not because it's become part of the culture. I was at the beauty parlor yesterday and this was all anyone was talking about."

The point is to get it "out there." And that's what Karl Rove did this week. It's become "part of the culture."

However, this line of attack is very risky for the GOP and they do appear to realize it. After all, when they attack a politician for being too old, they are not just attacking the sacred memory of Saint Ronald of Reagan, they are also attacking their own base. They are the party of older white people. Going after Hillary Clinton for being too old might not set right with some of them, especially the women. (And Republicans have enough trouble with that half of the population already, thank you very much.)

This is why they've fashioned a good cop-bad cop routine that's about as believable as Kevin Costner playing Robin Hood, Prince of Thieves. Bad cop Karl Rove stormed into the room, slammed his hands down on the table and hurled his accusations about Clinton's so-called brain damage. He luridly went on and on about blood clots and secret hospital stays, implying that Clinton was hiding a very serious brain impairment of some sort.

He was then pushed aside as a more responsible member of the GOP immediately stepped up to criticize Rove's indelicate comments. That would be the very sensitive good cop and new age guru Newt Gingrich:

i am totally opposed and deeply offended by Karl Rove's comments about Secretary Clinton. I have many policy disagreements with Hillary but this kind of personal charge is exactly whats wrong with american politics. he should apologize and stop discussing her health. i was angry when people did this to Reagan in 1980 and I am angry when they do it to her today.

That's so true. It's just shocking that we've come to this. How do you suppose that happened?

Well, it turns out that back in the 1990s a self-described Republican revolutionary promoted a new way of talking about politics and trained an entire generation of politicians in its dark practice:

[T]he clearest expression of Gingrich's philosophy of media came in a GOPAC memo entitled "Language: A Key Mechanism of Control." Distributed to GOP candidates across the country, the memo's list of words for Democrats and words for Republicans was endorsed by Gingrich in a cover letter: "The words in that paper are tested language from a recent series of focus groups where we actually tested ideas and language."

The language? Well, it suggested that Republicans use words like decay, failure, collapse, destructive, destroy, sick, pathetic, betray, traitors, corrupt, selfish, intolerant, greed, bizarre, cheat, taxes, they/them ... liberal ... to describe their political opponents. (They would use the antonyms to describe themselves, naturally.)

That was just the most systematic example of Gingrich's influence on American politics. For decades he has been a prime mover of a major shift in American political behavior from reasonably respectful partisanship to a take-no-prisoners style designed to destroy the opposition. Remember, it wasn't the Tea Party that first shut down the government purely as an exercise in political power. Gingrich was the fellow who turned normal budget negotiations into a full-scale ideological war.

It's hard to know why Gingrich, of all people, would be tapped to play the good cop in any situation much less in the anti-Hillary crusade. Perhaps he just ran with it because he's mellowing with age or is attempting to soften his legacy as a political terrorist. But in any case, he's doing what he does best: playing hardcore partisan politics. Here, he's soothing the white-haired Tea Partyers who might reflexively recoil from suggestions that someone of "a certain age" is too old to be president.

And perhaps that makes sense. If there's a right-wing Godfather (in the Corleone sense of the word) Newt Gingrich is it. He's their true north.