They're cloning Beyoncé! Why the future of music is a bizarre, computer-generated mess

For anybody with eclectic musical tastes, the rise of Pandora and Spotify could turn out to be a real bummer 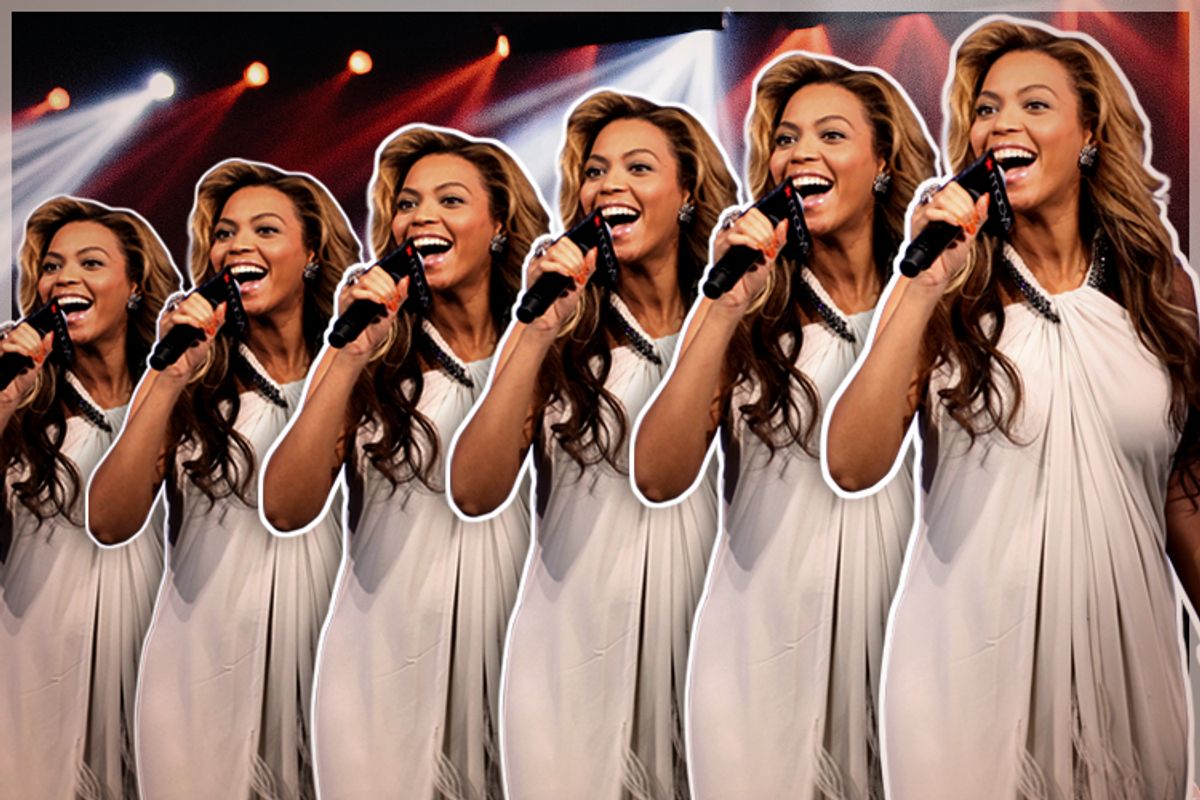 The genre of "instrumental hip hop" has taken over the airwaves in my house. Not because I have ever expressed any direct interest. It just sort of happened.

It started with Broken Bells, a collaboration between Danger Mouse (most famous for his work with Cee Lo Green in Gnarls Barkley), and James Mercer, the main force behind the Shins. A few months ago, when they released their new album, "After the Disco," I created a Broken Bells station on Pandora. And then I watched as it took on a life of its own.

Now when I pull up the station, I'm hearing whatever Pandora has decided I should hear -- specifically, in this case, lots and lots of "electro hip hop soul." And what I really want to know is: What does it mean? For bands, for record labels and for me, the music listener.

I have a rough idea of the mechanics of how this is happening. Pandora's much-touted Music Genome Project breaks down songs into their constituent parts -- harmonic structures, emotional intensity, level of electric guitar distortion, etc. On my Broken Bells station, Pandora's database suggests songs that are functionally similar to Danger Mouse and James Mercer's exquisite collaboration. The station's recommendations are further modified by my own choices -- thumbs up, thumbs down, skip -- and the choices of all the other listeners who have created similar Pandora stations. The Music Genome mixed with listener preferences is the kind of machine-mind meld we are increasingly witnessing when big data meets culture. The algorithm is in control.

But what does this mean for the music business? What market signals are being sent by the algorithmically organized hive mind? Listening to RJD2's funky electronica, I started to wonder: Have record labels started scouring the clubs for up-and-coming acts based on Pandora's say-so? Are musicians paying attentions to the cues offered by Big Data to construct songs in a particular way? (We already know that Netflix is making use of its immense storehouse of consumer data to guide programming decisions and influence how TV shows are plotted and directed.)

As music listeners migrate en masse to streaming services like Pandora and Spotify and Rdio and Beats Music, we are generating vast amounts of crunchable data. They know what we like. So what are they going to do about it?

This transition to a streaming world that is generating vast amounts of data on our listening habits is happening rapidly. Even as sales of direct downloads have started to decline, revenue generated by streaming subscription services grew by 51 percent in 2013, passing the $1 billion mark. The total number of songs streamed via various services rose 32 percent in 2013 to a hefty 118 billion.  The future of music is streaming; it's too convenient, too well-suited to a mobile world, and once you get hooked on access to the infinite jukebox, too compelling. But figuring out the cultural and economic implications of this shift is still a challenge.

If labels and musicians are able to target emerging tastes more precisely, they could conceivably forge a new path to profitability for the music business. But the perfection of our new algorithmic taste-makers also might hurtle us toward a cultural dead end. Once our robot overlords have figured out exactly what we want, what's to stop them from giving us that, and only that, over and over and over again. It'll be Beyoncé clones from infinity to beyond.

In such a future, is there any room for real creativity?

Alex White is the CEO of Next Big Sound, a music-oriented start-up that "analyzes social, sales, and marketing signals to help you make smarter, braver decisions." The "you" here is industry-focused -- the label looking to sign new acts, or where to commit marketing dollars. There is no question, says White, that the streaming media era offers new opportunities to understand how we interact with our music.

"In the analog era," said White, "there was no mechanism to understand how often someone played a song, other than the initial purchase of a record. Did they play it once or did they play it so many times that it scratched and they had to buy a new copy? You had literally no idea about the usage and enjoyment. I think there is a huge opportunity with these streaming services to understand listening behavior."

There may even be a democratic aspect implicit in the move to streaming. Traditionally, radio airplay has been influenced by record-label marketing budgets or straight-up payola. And the consolidation of ownership over radio unleashed by the 1996 Telecommunications Act resulted in markedly less diversity on the airwaves. The tastemakers have always decided for us what we should hear. But today, with the help of the algorithms that power the recommendation services at Pandora and Spotify, we are becoming our own tastemakers. So one could argue that Big Data enables a truer understanding of what's really popular.

But it's still unclear what that understanding ultimately means for the kinds of music that get made.

"There's a full spectrum of beliefs around this," says White. "Will it be a world where the lowest common denominator is most popular, or will we see the rise of niches that people are actually interacting with and enjoying over time?

Despite the obvious surge in streaming, it may still be too soon to say anything with clarity about future trends. The sample size isn't big enough. Direct downloads and CD sales still account for the bulk of all music sales.

Nonetheless, there's plenty of froth in the market related to music analytics and streaming. In February, Warner Music signed a deal with Shazam to create a label specifically for artists found through Shazam's millions of app clicks. Apple's rumored purchase of Beats by Dre may have been in part motivated by Beats Music's nascent streaming service. (And in March, Beats bought Topspin, a "platform" for connecting artists with their fans.)

Also in March: Spotify purchased the Echo Nest, a music analytics company similar to Next Big Sound. In February former Def Jam and Warner Music Group exec Lyor Cohen announced a new start-up called 300, which he claimed would be able to cut the costs normally involved in finding and developing bands:

By culling and analyzing music-related data that is generated online, Cohen intends to sidestep the massive machinery of the major labels. That would be in keeping with the name "300," a reference to a battle in Greek history in which 300 Spartans successfully fought against thousands of Persian soldiers.

Increasingly, says White, labels are looking at social and streaming data to help them figure out the next big thing. The A&R exec who spent endless nights in smoky clubs checking out bands is getting moneyballed by a new breed empowered to pay more attention to online search requests than to guitar riffs.

Of course, the music industry has always paid attention to what's popular and poured resources into copycatting whoever has the momentum. For Scott Pinkmountain -- a musician who works as a music analyst for Pandora, helping to refine the Music Genome Project -- the basic fundamentals haven't changed all that much. The algorithm isn't going to drive the market toward more instrumental hip-hop, he says. It's still all about the audience.

"I'm having a very hard time understanding how this would differ in root nature from the music-making industry simply saying (pre-streaming) 'what's hot' and pursuing that or the market reacting to that," said Pinkmountain. "You might be hearing Pandora stations 'drift' toward a specific type of instrumental electronica or something and that would likely be because that music was popular with audiences (they also tend to drift toward the Beatles and Simon and Garfunkel), but popularity is not being driven by the engines, it's being driven by listener thumbs (if anything) and labels are always going to pursue trends. So I just don't see a clear enough correlation to extrapolate a direct relationship."

He continues: "If we only used algorithms and musicological analysis to determine playlists, this might hold more water, but since we also factor in user data, I'd say it's a stretch since user data is such an unpredictable x-factor driven by the whim of taste and not necessarily by 'best' matches."

Pinkmountain's caution is welcome. The hype that accompanies the application of Big Data to any cultural endeavor gets more astronomical by the day. In her book "The People's Platform," Astra Taylor warns that "algorithms designed to analyze and intensify the catchiness of songs are being used to help craft and identify potential Top 40 hits." And indeed, there are already start-ups claiming the ability to do just that.

Nevertheless, the chances that our robot overlords will start writing their own guaranteed chart-topping hits seem to be, at this point, slim. As Pinkmountain noted in another interview: Nobody has yet succeeded in "reverse-engineering a song from the data."

"And I doubt anyone ever will," he continued. "Because it’s almost guaranteed to suck."

But Pandora's whole pitch is that by exploiting its data, its "genome" and what it knows about listeners like you, the service will "give people music they love." So far, it has translated that promise into 72 million "active" listeners.

Similarly, Brian Whitman, CTO of the Echo Nest, told Billboard in March that "obviously, the more we know about the listener, the better everybody is ... Any smart service would want to know all sorts of tracking data across everywhere you go. It’s not just for them obviously, it’s for you to know more about your taste."

And then there's the decidedly not shy perspective of Next Big Sound, as expressed in a manifesto of sorts published on the company's website.

We believe that data has the power to transform the music industry as it has transformed the fields of finance, weather and sports before. By tracking every fan interaction across every artist in the world — from social to sales, from purchases to plays — the insights we generate can reshape the way artists are discovered, marketed, and improve the speed with which they can build lasting and prosperous careers.

Every listen on the radio, every play on YouTube, every mention and follow on Twitter, every purchase on iTunes, and every concert and press mention? What would that tell us about the pulse of humanity? About the rhythm of the planet? And how would that data help artists intelligently market to their fans and spread their music worldwide?

The pulse of humanity! Increasingly, that's what "big data" is -- our hopes and dreams and desires expressed through the concatenation of every click we make. Music, in a streaming-media era, has never been more social. Even when we are listening alone we are part of a larger audience. If the industry hasn't yet figured out how to reverse-engineer the next star from all that data, well, it can only be a matter of time, right?