Egomania at the Times: Abramson-Baquet drama sounds eerily like a Washington power struggle

Jill Abramson and Dean Baquet are both former Washington bureau chiefs. What ugly habits did they pick up there? 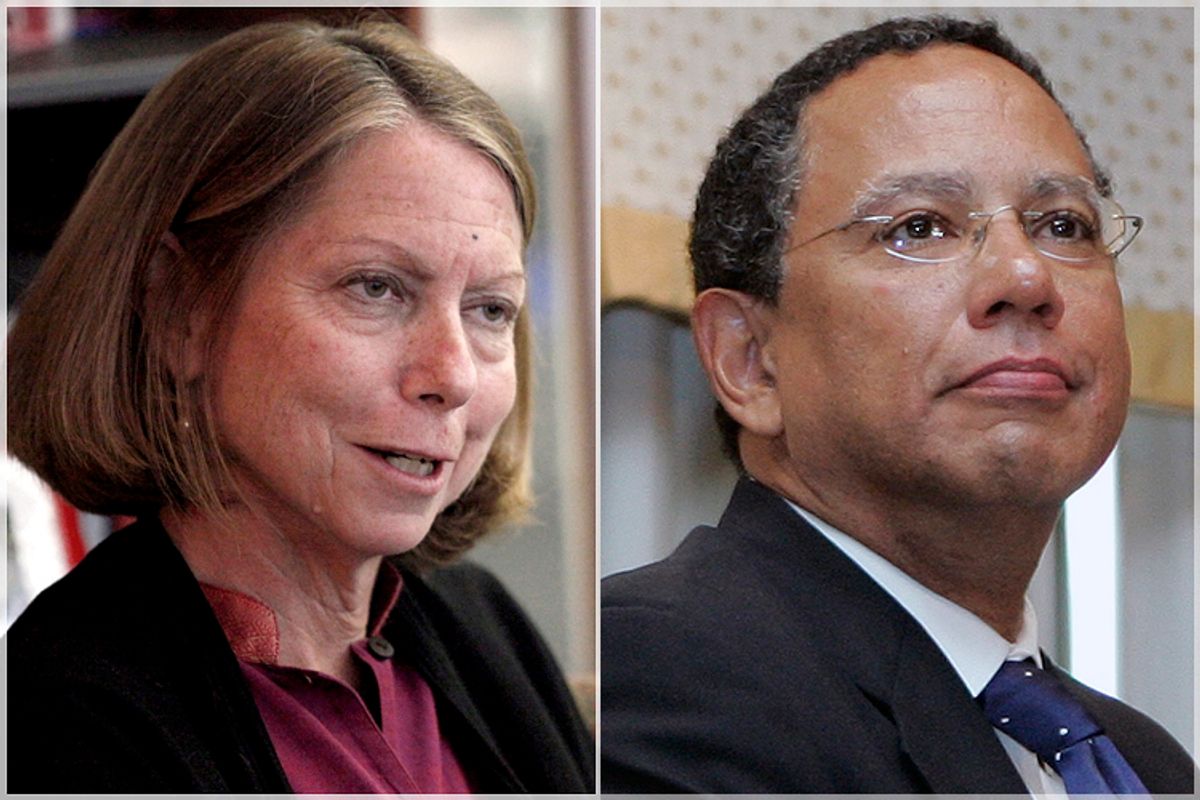 It's understandable, by now, why New York Times publisher Arthur Sulzberger Jr. did not want to go into details of executive editor Jill Abramson's "ouster," "defenestration," or whichever term of art for "firing" you prefer: because it was ugly, petty, and involved a clash of egos set off by the smallest of perceived slights. Understandable, yes, but obviously a fantasy: there was no way that the sacking of the Times' first female editor after only three years, under mysterious circumstances, was not going to dominate the east coast media's favored form of meta media coverage indefinitely. Sulzberger should probably fire himself over the Times' PR strategy here, but he won't, because he owns the newspaper like his daddy before him. What a life.

One of the top media reporters on the case, the New Yorker's Ken Auletta, came out with his latest report on Abramson's firing over the weekend. It is the most damning so far, in that no player comes out looking good. Miscommunications are perceived as fatal slights, the sharing of a title is perceived as a "dilution" of one's standing, the chain of command is ignored in secret meetings, and so forth.

One incident I described in that time period was a lunch between Dean Baquet and Janine Gibson, the editor of the Guardian’s U.S. operation, who was being courted by the Timesto run its digital efforts. I wrote last Thursday, “What Baquet did not know, until Gibson herself mentioned it to him at lunch, I’m told, is that she was offered a managing-editor job comparable to his own. He was, it is fair to say, unenthusiastic, and even angered.” After the lunch, Baquet complained to Sulzberger that he had been blindsided. He said he had no idea that Gibson would be ranked alongside him as a co-managing editor; he also raised his general, long-simmering frustration with Abramson’s autocratic management style. Was this enough to get her fired? Given the tone of the e-mail from Thompson, something in the story still seemed to be missing.

An answer, reported by Dylan Byers of Politico late yesterday, was that Abramson had been dishonest with Sulzberger and Thompson. Extremely well-informed sources at the paper familiar with the reasons for Abramson’s dismissal have also given this account toThe New Yorker: they say that Abramson was, essentially, fired for cause, for lying to Sulzberger that she had squared Gibson’s rank and arrival with Baquet when, in fact, she had not. The sources say she misled Sulzberger when she said, in person and by e-mail, that she had consulted with Baquet about the offer to Gibson and had worked it all out in detail with him. Baquet was furious. At a dinner with Sulzberger, Baquet basically described the incident as a humiliation. He could no longer work with Abramson.

So... Abramson didn't clear with Baquet that Gibson would get the title "managing editor," and that led Baquet to issue an ultimatum that either she needed to be fired or he would leave? Couldn't he have just talked to Abramson and said something like "Oh, I didn't know she was also going to get this title that I have. Is that true? I mean, whatever, I just didn't know. I like Janine Gibson and it will be cool to work with her." And Abramson could have responded similarly to Baquet, like, "My bad, I guess I didn't clarify that. But obviously you'll still be managing editor, too, and next in line for the title of executive editor, so don't worry. They're just titles, but you'll still be you. Anyway let's just keep on doing what we're doing. BTW I'm going to get a Slurpee do you want one while I'm out?"

It could have been resolved, the way normal people resolved things. Instead it was a "humiliation" to the greatest degree imaginable, one that would force Decisions to be Made.

When I read this, I had a specific reaction along the lines of "Ha ha ha, what?" that I usually only get when reading about another certain reviled bureaucracy, where titanic egos clash over such things as miscommunications and titles and public perceptions and the "dilution" of roles. Where someone not standing at the right time or emailing the wrong person about some topic or not approving a personnel onboarding through the proper chain of command can always be seen, and always is, as a declaration of war against a colleague's big fat head.

This sounds like every book written about "insider" Washington ever written, to be exact. You know the sort of thing -- Larry Summers isn't copied on an email and this is the Last Straw. Elizabeth Warren uses the wrong adjective in an interview and this is the Last Straw. An senior Justice Department official asks someone else about the cherry blossoms two weeks before the cherry blossoms are even in bloom, and this is the Last Straw. In this genre, the Last Straw always comes after someone has been causing "headaches." To Geithner, the IG had been causing headaches for some time for writing his name in frilly cursive and ordering bologna sandwiches for him at Subway. Geithner, as those in the department knew, was a handwriting traditionalist, and considered bologna the Devil's meat. All of this came to a head when the IG emailed Geithner requesting some document about task force members without first notifying his secretary about the Timberwolves score. It was the last straw.

Both Abramson and Baquet are former Washington bureau chiefs for the New York Times. One wonders what awful habits they picked up during their time on the Potomac.