No, they're not abandoning discriminatory policies. Republicans have a different idea: acerbic press releases 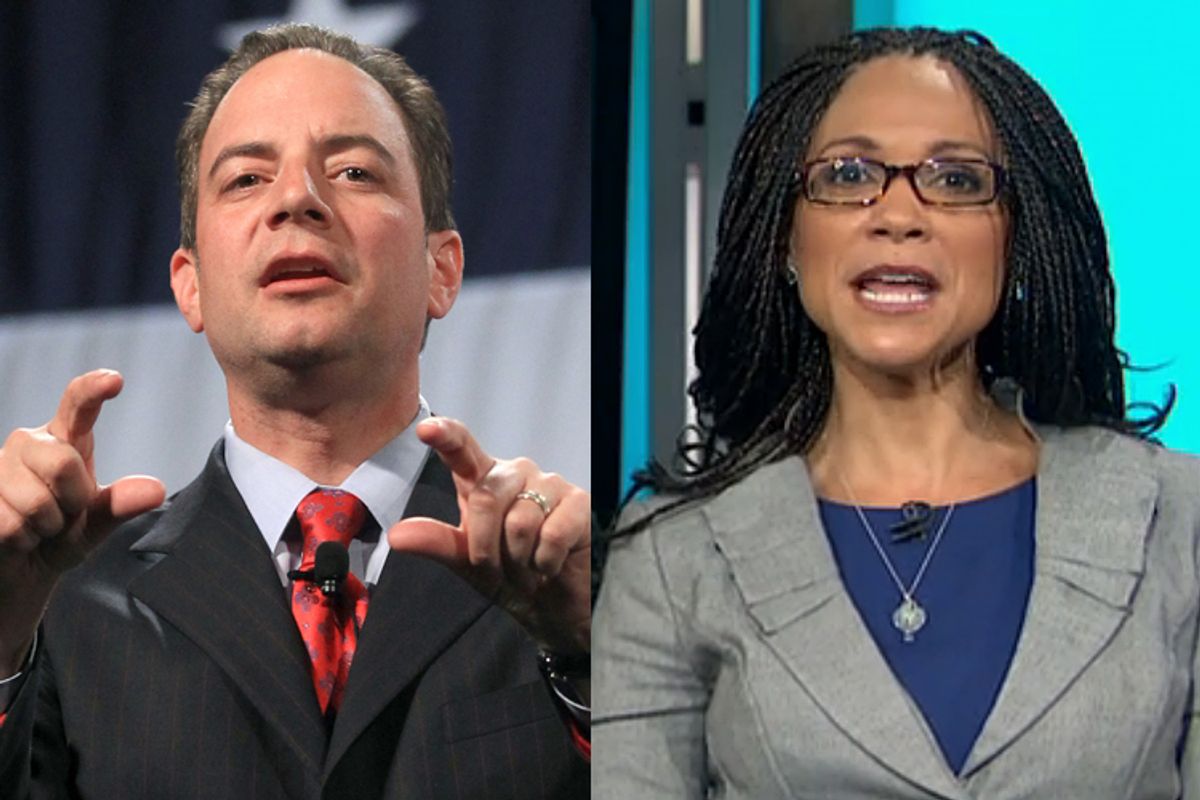 After generations of Southern strategy politics and thinly disguised appeals to white voters’ racial resentments, the Republican Party has earned itself an abysmally poor reputation among black voters. Mitt Romney, who did not suffer from high expectations when it came to minority outreach, took just 6 percent of the black vote in 2012, and Republicans realized that perhaps a course correction was needed. So the Republican National Committee assembled the Growth and Opportunity Project, which laid out a number of recommendations for how the GOP can better connect with non-white segments of the population.

Read through the document, and you’ll note straight away that “get into racially charged Twitter fights with high-profile black journalists” is not among its recommendations for improving relations with black voters. And yet, according to BuzzFeed, that’s precisely the strategy the RNC has adopted.

Recalling an instance in which an editor at Ebony leveled some racial attacks at a black RNC staffer via Twitter and wrongly identified him as white, the RNC communications director explained why they deliberately made a row over the episode:

RNC communications director Sean Spicer later said their decision to escalate the flap with Ebony was meant to show black voters that Republicans took their votes seriously. “This was not meant to be provocative,” Spicer told BuzzFeed. “What this was really about was letting the readers of a very prominent African-American magazine know the Republican Party is fighting for their vote.”

I don’t claim to know much of anything about voter outreach, and I certainly don’t presume to speak for black voters (I'm not one), but I think I spy some problems with this strategy.

While the RNC recognizes that it has a problem with black voters, its approach to repairing that rift is to argue to black journalists: “It’s not us; it’s you.” Again, here’s Spicer:

Spicer said part of the purpose of all this goading is to illustrate how the political biases of community gatekeepers often prevent Republicans from reaching voters of color.

“If you open certain publications, you might say, ‘I never see anything about Republicans,’” Spicer said. “Well, in a lot of cases, it’s not for lack of trying. It’s because they don’t want to highlight the work we’re doing. The ultimate win for us is that we create a dialogue where readers of that publication see more conservative thought and opinion and ideas and understand how many people in their community share those ideas.”

The argument is that Republicans would be far more successful at winning over black voters if it weren’t for biased black journalists. Even if this were true, the RNC is not “creating a dialogue” – it’s whipping up frenzies of outrage. Shaming an editor at Ebony for some stupid tweets makes for a nice P.R. victory and the RNC did have a valid complaint, but in antagonizing black journalists to reveal their supposed biases the Republicans are targeting a symptom of the strained relationship rather than the cause.

In that sense the strategy seems to be more for the benefit of the existing conservative base, which is already attuned to accusations of “media bias” and which tends to view Democrats and the media as “the real racists.” The RNC is also very obviously playing to political journalists, who are the only people in America who get excited over Twitter fights and cable news boycotts.

What you’re not seeing from Republicans is any effort to grapple with the idea that Republican policies play a role in their estrangement from African-American voters. The GOP mania for restrictive voter ID laws is all about pressing their advantage with white voters and keeping reliable Democratic constituencies – minorities, low-income voters -- from casting ballots. Some Republicans will deny it, but others openly cop to the strategy. Rand Paul came close to breaking ranks when he said his party has “gone completely crazy on this voter ID thing,” but then he backed away and made clear he was talking about matters of emphasis, not policy.

Instead, they want us to think that the long-standing division between the party and black voters will be resolved with the "dialogue" fostered by acerbic press releases and a few strategic hashtags.