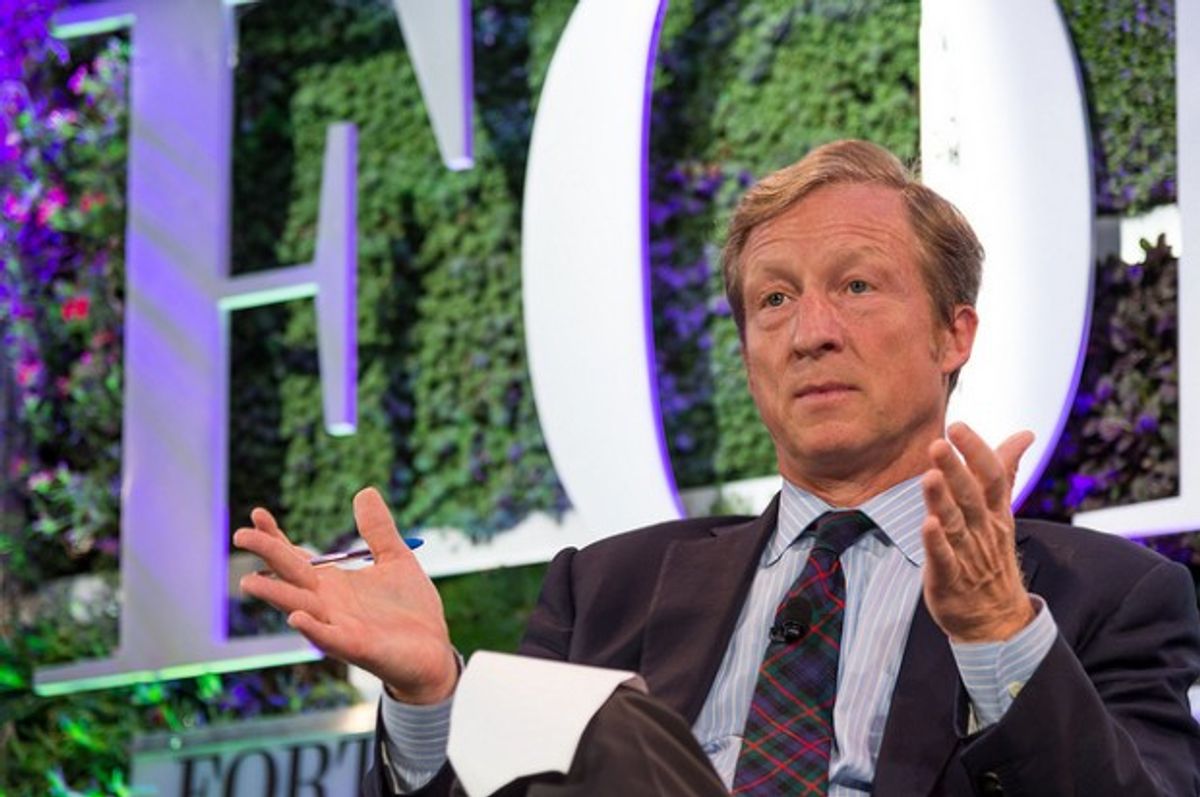 Seven Republicans in key Senate and governors' races are about to see their pro-fossil fuel, anti-climate policies come under attack. Billionaire Tom Steyer, founder and president of NextGen Climate, announced Thursday that he'll be focusing $100 million on influencing the midterm elections in states where climate change could play a vital role.

By supporting candidates who openly embrace climate change policies and exorcising deniers, Steyer's strategists told the New York Times, he hopes to "create a political landscape in which candidates fear that they will be politically punished for questioning" the established science of climate change -- all of which can pave the way for making climate a central issue in the 2016 elections.

To that end, he's jumping into Senate races in Colorado, Iowa, Michigan and New Hampshire, and into gubernatorial contests in Maine, Pennsylvania and Florida. The Times has more on how he's hoping to shape the debate in each state:

In the Senate race in Michigan, Mr. Steyer’s group will back Representative Gary Peters, a Democrat who says he will make a point of highlighting how climate change is lowering water levels and leading to environmental problems in the Great Lakes, while also threatening Michigan’s agriculture.

...In Florida, NextGen will spend to defeat Gov. Rick Scott, who has openly questioned the science of climate change. Charlie Crist, a Democratic challenger and former Republican, has cited skepticism of climate change as one of the reasons he left the party.

...In Iowa, NextGen will back Representative Bruce Braley, a Democratic candidate for the Senate who voted for a House climate change bill in 2009. The group will attack Mr. Braley’s potential Republican opponents, State Senator Joni Earnst or Mark Jacobs, a former electric energy company executive, by criticizing claims they have made questioning climate science.

In Maine’s three-way governor’s race, Mr. Steyer’s group hopes to unseat the Republican incumbent, Paul R. LePage, who has said that climate change could bring economic opportunity to his state, as melting ice in the Northeast Passage opened up shipping routes, and warmer winters could attract tourists to Maine year-round.

In Colorado, the group will back Senator Mark Udall, a Democrat who has vocally supported climate and clean energy policies, against Representative Cory Gardner, who has questioned the science of climate change. In the Pennsylvania governor’s race, NextGen will back Tom Wolf, a Democrat, against the Republican incumbent, Tom Corbett, who in an interview this month called the science of climate change “a subject of debate.”

The group is also targeting New Hampshire Senate candidate Scott Brown, who has voted to protect billions in oil subsidies, and Pennsylvania Gov. Tom Corbett, who claims not to have “read any scientific studies that would lead me to conclude there are adverse impacts” from climate change.

“The debate on climate change is settled: it is here, it is human-caused, and it is already having a devastating impact on our communities, but we need to accelerate the level of political support to address this critical issue before it’s too late,” Steyer said in a statement, implicitly responding to critics who compare him to the Koch brothers. “This means making politicians feel the heat—in their campaign coffers and at the polls.”