In moments after unspeakable tragedy we must not rush to conclusions. But here's one thing we already know too well 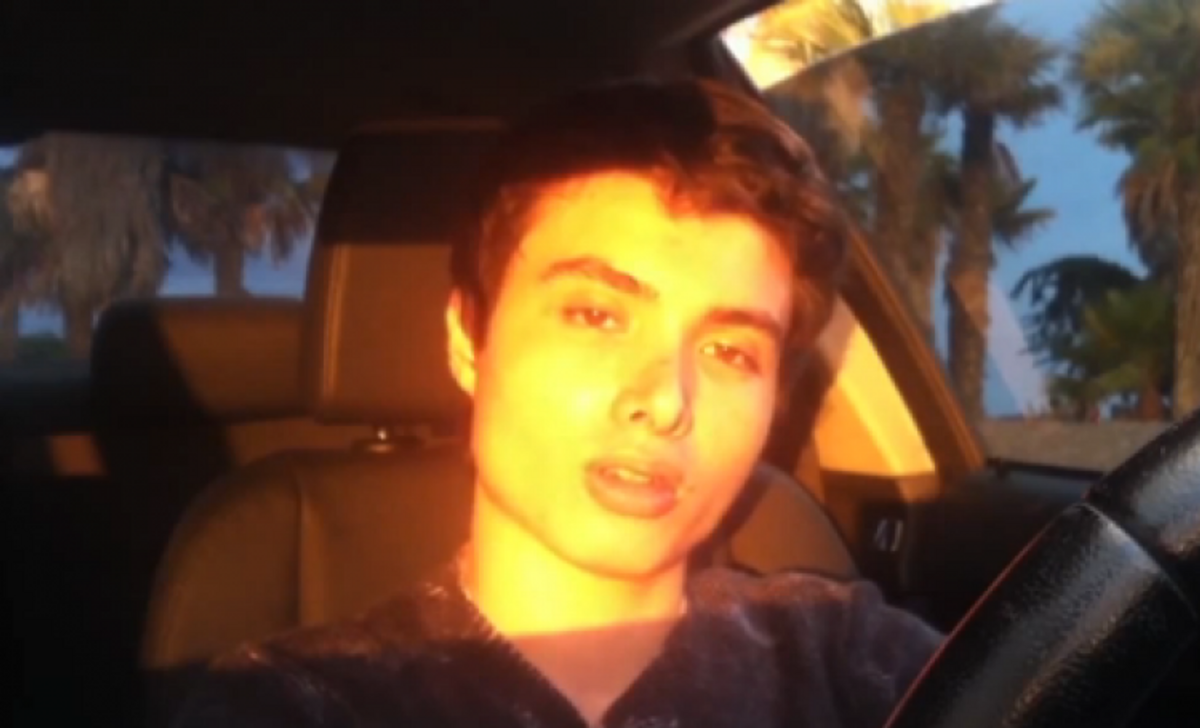 We don't yet know much about the six innocent women and men who were killed in Isla Vista, California late Friday night, but we have come to know a few things about the man who is alleged to have murdered them. Hours before he is believed to have fatally stabbed and shot six people and wounded 13 others in that coastal college town, Elliot Rodger filmed a video of himself -- palm trees behind him, the glow of an orange sun highlighting his young face -- and vowed to get "revenge against humanity."

There's a lot more in the video, and the 140-page "manifesto" he left in his apartment. Rodger felt victimized by women, whom he appeared to desire and loathe simultaneously. He expressed anger and resentment toward other men, often because of their relationships with women. He seemed to be a profoundly troubled, profoundly lonely young man. According to a statement from the Rodger family's attorney, he was receiving care from mental health professionals after his parents were alarmed by his Internet footprint -- a series of YouTube videos and men's rights chat groups where he expressed his violent views about women, men and himself.

It's hard to say what any of this actually tells us. Maybe nothing. I won't pretend to know. What role did Rodger's misogyny play in this tragedy? And what about his apparent struggle with mental illness -- that big, blanket term we never talk about except to throw it around as if it explains why someone would murder six people? And what about guns? What of our cowardice -- the cowardice of our elected officials -- when it comes to regulating deadly weapons so that we stand a better chance of keeping them out of the hands of men like Elliot Rodger? What about these things? As a friend and I discussed earlier while trying to grapple with the tragedy as we learned each new chilling detail, all of these things matter, but none seem sufficient to explain what happened. They couldn't possibly, and yet they're all we have.

It would be irresponsible to lay this violence at the feet of the men's rights activists with whom Rodger seemed to find support for his rage. Rodger is alleged to have murdered six women and men. No amount of Internet vitriol -- no unfulfilled threats of violence -- can equal that. But it also denies reality to pretend that Rodger's sense of masculine entitlement and views about women didn't matter or somehow existed in a vacuum. The horror of Rodger's alleged crimes is unique, but the distorted way he understood himself as a man and the violence with which he discussed women -- the bleak and dehumanizing way he judged them -- is not. Just as we examine our culture of guns once again in the wake of yet another mass shooting, we must also examine our culture of misogyny and toxic masculinity, which devalues both women's and men's lives and worth, and inflicts real and daily harm. We must examine the dangerous normative values that treat women as less than human, and that make them -- according to Elliot Rodger -- deserving of death.

There is an angry part of me -- a frightened part of me -- that wants to tear Rodger's video manifesto apart in the pettiest terms imaginable. Point to how cliched it all is -- the tired self-importance, the god comparisons, his lazy use of "sluts" and "brutes" to describe the women and men he would allegedly target and murder only hours later. I have seen these videos before. Women have heard these threats before, and been forced to consider how seriously they should take an anonymous man who says he knows where they live and tells them, "I am the one who is going to kill you." If Rodger had posted his angry monologue to YouTube or fired it off in an email and then gone about his day -- seething privately and without violence about his wounded sense of entitlement and the sting of having his resentful and warped desires unfulfilled -- the country wouldn't be talking about him. Because until the moment that he is alleged to have killed six women and men, Elliot Rodger was every bit the same as the other men who are defined by their resentment toward women and their sense of bitter victimization in the world. Men who threaten women in person and online in an attempt to control their lives. Men who feel that girls and women owe them adoration, sexual gratification, subservience. Men whose sense of rage and entitlement has rotted their brains and ruined them.

And this anger -- this toxic male entitlement -- isn't contained to random comment boards or the YouTube videos of disturbed young men. It's on full view elsewhere in our culture. Earlier this week, a writer for the New York Post quoted a member of a men's rights group as the sole source in a report on Jill Abramson's ouster at the New York Times. Mel Feit of the National Center for Men told columnist Richard Johnson that Abramson was systematically firing men and replacing them with women. He said that our society gives women preferential treatment. On his website, Feit bemoans a culture in which men are subject to the powerful whims of vindictive women who exist on "sexual pedestals." He argues that men can't be blamed for rape after a certain point of arousal. These views about women and violence are replicated in our criminal justice system. They filter into our media. This is what makes Rodger's misogynistic vitriol so terrifying -- the fact that in many ways it's utterly banal.

The news out of Isla Vista is still painfully fresh, and in the coming days we will continue to struggle to understand this pattern of violence. And while we do that -- the work of considering what laws, support systems and cultural shifts must be put in place to prevent these tragedies from destroying more lives, families and communities -- I can't help but be reminded of all of the women who have been victimized by a culture and a system that denies their humanity.

I'm reminded of Marissa Alexander, whom the state of Florida is trying to imprison for 60 years because she fired a warning shot to ward off a man who had a history of violently abusing her and had told her that he was going to kill her. I'm reminded of CeCe McDonald, a trans woman of color who was incarcerated for defending herself during a brutal assault. "Her gift for survival was a prison sentence," trans actress and activist Laverne Cox recently observed. I'm reminded of the 276 Nigerian schoolgirls who were abducted more than a month ago and remain missing because they had the audacity to go to school.

I think of the millions of other women and girls whose names the public does not know, but who have been forced all the same -- by institutional forces larger than themselves, by systemic and enduring misogyny and racism, by the sheer bad luck of being at a given place at a given moment -- to become statistics or symbols of our culture's profound disregard for the humanity of women and girls. I am reminded of all of them and I don't know where to put the pain and anger that comes with that. There is no possible vessel large enough to hold it all.