How to win Memorial Day: A holiday guide to arguing with right-wing relatives

Your guide to arguing with your crazy right-wing Uncle Dingo over Memorial Day weekend, TYRANNY! edition 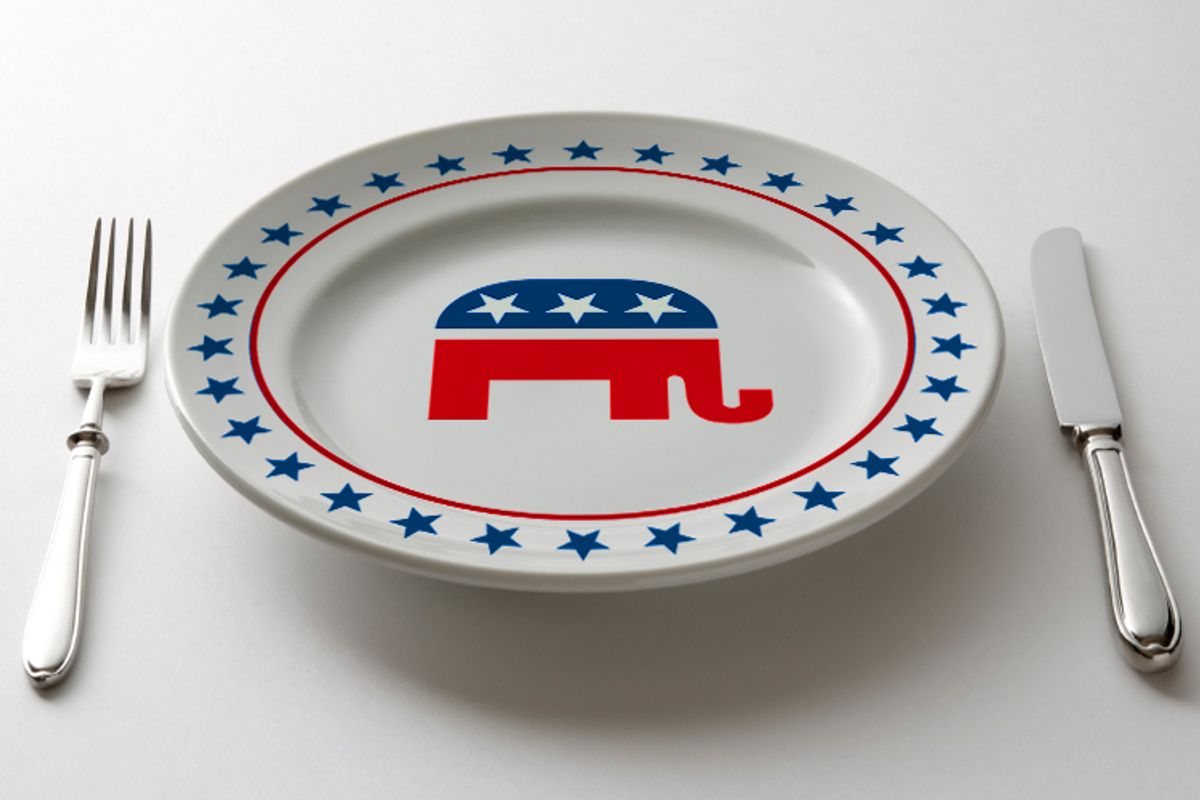 With Memorial Day weekend, we finally have the traditional, though not technical, beginning of summer. (Given 2014 weather patterns, however, we will probably get at least 10 more Weather Channel-christened "Snowstorm Frodo" blizzards by July 4. How about that weather, eh?) But anyway. Memorial Day weekend is another great opportunity for the whole family to gather at a beach house or, if traffic's unmanageable, a makeshift interstate-median campsite. Or maybe you will be alone? Don't feel bad. Being alone during one of the year's most fun three-day weekends can be... good??

So, you're at the barbecue, or the fake Disneyland picnic table, and everyone's having a good time noshing on cheeseburgers or chicken things or other meats or quinoa. Uncle Dingo's talking about his kids' (your cousins') mediocre peewee baseball performance this spring, and then that leads to discussion of the current Major League Baseball standings, maybe that leads to some light chatter about the weather, the accuracy of Thomas Piketty's data integration, the price of beans, etc. And then right when Cousin Tombert, who just graduated college with a B.A. in medieval poetry gender roles and is about to start a job leading the complex derivative trading desk at a Greenwich-based hedge fund, is walking out with Cool Whip and those poor-man's strawberry shortcake shells that the grocery stores sell in six-packs, Uncle Dingo, out of nowhere, goes, "...well, what do you expect, in a world where President Hussein Obama thinks he doesn't need Congress anymore."

Once again, the first rule of family gatherings is that you never want to talk about politics, ever. But certain political phrases that have circulated in right-wing media or in chain letters written in alternating blue-and-yellow Comic Sans font may have embedded themselves in a relative's brain, and you're wondering how to respond. We're here to help.

Obama is a tyrant who just does whatever he wants now and doesn't care what Congress thinks.

Ever since President Obama's State of the Union earlier this year, in which he pledged to use what executive authority was available to him to further his goals while Congress remained in gridlock, conservative media and politicians have been lambasting the man as a "tyrant" who rules by executive fiat. Republicans have even turned this into an excuse to no longer work with him -- because he can't be trusted to follow the will of Congress.

It's true that Obama has been more willing to issue executive orders this year. But those executive orders can't achieve much. Many of them are just setting up pilot programs or calling for a meeting of CEOs. (More recently, he used his unchecked authority to designate a new national monument in New Mexico.) A few big decisions do loom, sure: possibly new emissions standards for existing power plants or a decision to slow down the pace of deportations of undocumented immigrants.

But the president can't achieve a whole lot through executive actions. His major legislative goals for the foreseeable future are to increase the minimum wage and to pass comprehensive immigration reform. He can't do those things without Congress passing legislation, because that is the form of government we have. And because the House GOP apparently no longer believes that this president can be trusted to do anything, the remainder of Obama's term is going to be a very slow and boring one. It's essentially already over.

Hillary Clinton can't be president because she tripped and her brain fell out and she's old.

Famed GOP strategist/fundraiser Karl Rove recently started a firestorm when he suggested that Hillary Clinton's health may prevent her from pursuing another Oval Office bid. "Thirty days in the hospital?" Rove said. "And when she reappears, she's wearing glasses that are only for people who have traumatic brain injury? We need to know what's up with that.” It was a classic Rove tactic of throwing a wild rumor into the ether and hoping that it feeds off of itself for the next several years. He would later deny insinuating that Clinton had suffered some sort of permanent brain damage, but Karl Rove is a liar.

This was a strange thing to say for various reasons. Clinton's doctors claim that she is 100% recovered. It also contradicts the other leading Hillary Clinton meme in conservative circles: Clinton is so in possession of her faculties that everything that happens anywhere near her personal and professional life is a well-plotted conspiracy orchestrated by Hillary Clinton herself. If Hillary Clinton runs for president and is suffering from "brain damage," that should be pretty clear from the get-go. And all presidential candidates disclose their medical history during the campaign. But there is no reason to suspect that her faculties are impaired. If you don't like her, then you don't like her! That's fine! But this is just Karl Rove throwing everything at the wall.

Liberal college brats all built electric fences around their campuses to prevent Conservatives from speaking there.

"Brats" is certainly an arguable point. And it's true that campus protests this year have led graduation speakers like Condoleezza Rice, Christine Lagarde and a former University of California chancellor to cancel appearances. But students on campuses have the right to protest; they didn't just discover that this year. Similarly, these speakers all had the right to not cancel their appearances just because 50 college kids sat in some campus office chanting slogans for an afternoon. The speakers prefer to martyr themselves and lament the end of the academic ethos instead.

Oh my god! C'mon Uncle Dingo, you're better than that. Reparations are in the news because The Atlantic has just published a long story by Ta-Nehisi Coates called "The Case for Reparations." It's supposed to be an interesting and informative read regardless of whether you agree with the policy prescription.