"Partisan politics at its worst": Inside the conservative assault on the VA

Former Army officer and co-founder of VoteVets.org Jon Soltz on why stakes in VA scandal are higher than you think 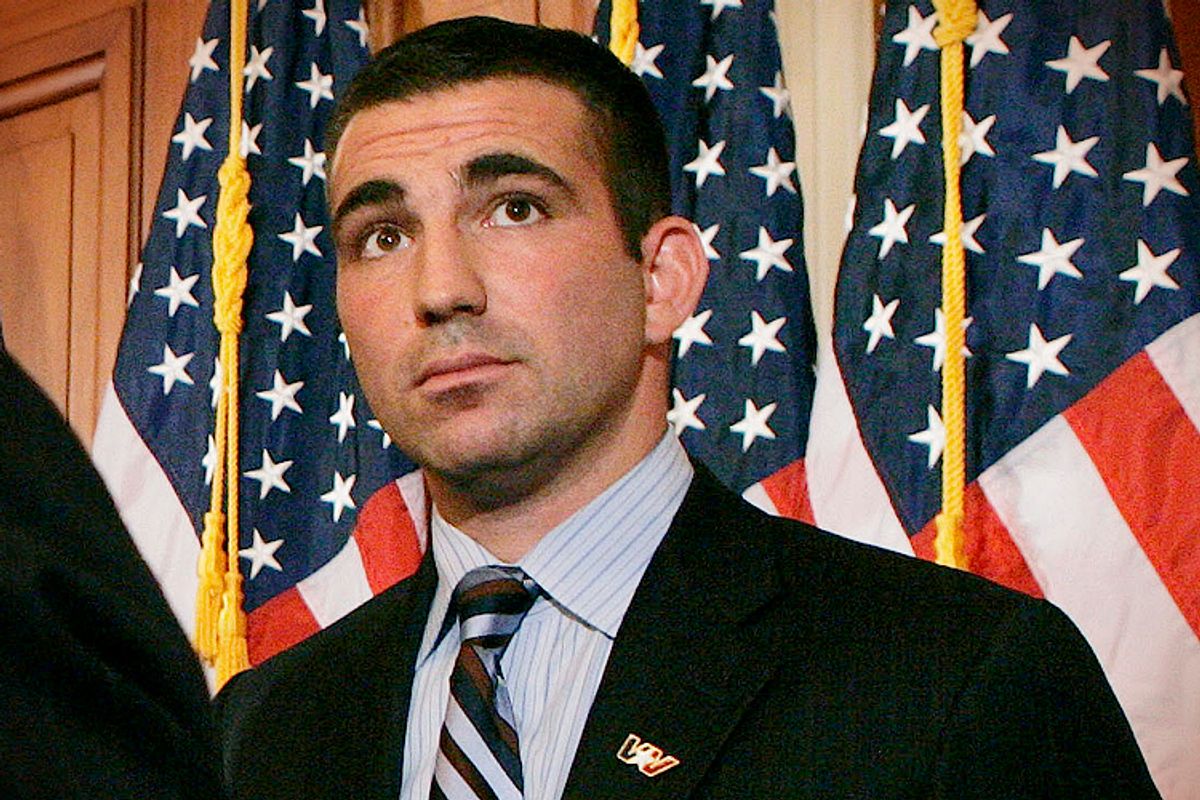 The multiple, unfolding scandals that are rocking the Department of Veterans Affairs have slowly begun to bubble up into the mainstream political press, raising questions about mismanagement at the department and presenting the Obama administration with a serious potential P.R. challenge. Republicans are already calling for VA head and retired Gen. Eric Shinseki to resign, and while Obama has thus far resisted, his recent comments indicate that if serious evidence of wrongdoing is found in a pending internal review, major changes may ensue.

To better understand the issue and its moving parts, Salon recently reached out to Jon Soltz, a former Army officer in the Iraq War and co-founder of the 200,000-plus membership VoteVets.org. Soltz sounded off on the VA's troubles, Shinseki's future and why the conservative assault on the department may be just one step in their long march to destroy government-provided healthcare. Our conversation follows, and has been slightly edited for clarity and length.

So what is, in your estimation, the VA scandal actually about?

What you’re seeing is the larger question as to why the VA is being attacked here, and a lot of it has to do [with] that it provides public healthcare. Some of the groups attacking the VA — and there only is one veterans services organization, American Legion, that’s called for Shinseki’s resignation — there’s accusations that they could potentially have a different agenda. I think everyone’s basically waiting for the internal investigation to give us the facts ...

Some groups with conservative ties have called for [Shinseki's] resignation, and a lot of Democrats are waiting for the investigation to be finished … If Gen. Shinseki knew about this, of course, he should be fired. But I served with him in the Army; he’s a rather honest man. And ... he was right about Iraq. He was essentially someone who warned the public as to what Iraq would cost when he was in the Army, and it’s really ironic to attack him for being the guy who’s now trying to clean up the mess of people who started this war.

Is the wait-list issue about a lack of resources?

I think the second thing on the backlog is that most of those claims are secondary claims, so people that were already in the VA perhaps, that needed PTSD treatment — that’s an issue now, secondary claims. More importantly, there’s been a transformation into electronic medical records, so they’re about done with that transformation from paper medical records to electronic. So all these things are going on right now.

I think, lastly, there were a million veterans who were uninsured in this country for years; they either didn’t qualify for VA coverage at one point and didn’t get in, or they weren’t aware that they did qualify. Because of Obamacare, people who were uninsured have sought places to become insured and one of the places that veterans have gone to is the VA. So you have sort of a lot of things that happened that caused the backlog ...

The largest question is, in the process of bringing all these veterans in who were basically uninsured before or denied benefits under other administrations, is the [resulting] wait time causing death? I think that’s the question that everyone’s waiting to find out.

What kind of reforms would you, if you were king of the world, like to see implemented?

I’d like to pass the $21 billion package that Sen. McConnell shut down ... If I was king of the world, I would make VA doctors the best-paid doctors out there. The VA has got to be a place you want the best people to be. So I do think funding is an issue. If you’re going to have a public healthcare system, it shouldn’t constantly be a fight for full funding of the VA, and it shouldn’t constantly be a fight for money to get the best people there. It’s not about paying bonuses to people; it’s more about recruiting the best people to work there for years and years and years. So I’m for strengthening the pay and benefits for workers at the VA, not just for the doctors, but for the workers as well, because it’s got to be a place people want to stay for a long time, and you want to attract the best people there ...

I certainly think that those are large issues that have been there for a long time. I think full funding for the VA and taking it out of the discretionary budget is another issue. People want to say it’s not a funding issue, but if you take the funding issue away, I think it’s hard to completely put this thing on the workers. The VA has been a success on some level. It’s difficult, because they’re under so much more scrutiny than private hospitals because they’re public ... Certainly for progressives, if you want to do public healthcare you need to make sure it’s better than what the private system is offering ...

You don’t want to outsource veterans to deal with private healthcare companies. I mean, now they’re fighting them for claims that have to do with war? That’s unconscionable. And that’s what’s being floated by [the administration's] opponents here. We don’t need people who served in war to fight a private healthcare company for their benefits. That’s appalling, as far as I’m concerned, and it’s a terrible idea.

Wait — what does private insurance have to do with this?

There’s an argument to be made that the people going after public healthcare, across the board, are going after the VA in the same way they go after Medicare. So when you have a veteran who has a claim for PTSD, and maybe they’re having nightmares and then they go to the psychiatrist, and they need to get their services, if they go to a private healthcare company, then [they're] dependent on that private healthcare company providing them [with] those services.

So the last thing you want is someone who did service to their country ... now fighting a private health insurer for their benefits, or to pay for their support; and that’s why there’s a lot of people who feel the attack on the VA is really a plan to shut the VA down. To put more of its business into almost a voucher system that veterans would use to then go with their private insurance to whatever doctor they want. Which then, of course, you’ve got doctors still deciding who they see based on who has insurance.

You said a bit ago that, if he knew about the possible severity of the wait-list issues prior to now, Shinseki should step down. But there are a lot of people already saying he should step down. What do you think that’s about? Is that just people trying to get a scalp from the administration?

It’s partisan. Absolutely. Shinseki was right about Iraq; he testified [that] you’d need a quarter-million troops for 10 years. There are people who are still upset about that. He basically said that [Rumsfeld's] 30,000 troop projection in the first year was bogus. And now he’s the one who’s tasked with taking care of all these veterans when they return home, and [Republicans] want to fire him. So there’s a lot of partisan politics. One of the groups, Concerned Veterans — just like Concerned Women and all the other Koch-backed groups — is nothing more than a privatization arm of the Koch brothers. I mean, they’re the same group that wants to push the entire military pension program into a 401(k) system. So this is partisan politics at its worst right now ... So the people calling for [Shinseki's] head are solely looking to bludgeon him because they want to weaken the VA and [punish him] for his strong stance against [invading] Iraq.

You think Iraq's definitely part of this?

Sure. Gen. Shinseki wouldn’t be working for Barack Obama if he wasn't seen as someone who stood up to George W. Bush. His whole story started right there. He’s been largely apolitical. I’m not going to say he’s a good public affairs officer. He needs to get out and defend himself; there’s no question about it. It’s hard for people to defend him when he doesn’t defend himself in the eyes of the public. But that’s not really how military officers are trained. They’re not very public people, they’re not political theater types. They do the work; they don’t do the press. And so he’s largely vulnerable because he’s so quiet in the media.

I wanted to transition a bit to talk about Memorial Day. After a decade-plus of conflict, the president is still trying to wind down the Bush-era wars. He's done so already in Iraq and plans to do so this summer in Afghanistan. In that context, what does Memorial Day mean to you?

It’s a very hard holiday. A lot of people always call me and say, "Hey, can we do this on Memorial Day? or this on Memorial Day? and talk about this issue on Memorial Day?" My answer, always, is unequivocally no. It is the only day of 365 days [per year] that we have a day off of work to remember the war vets. That is its sole purpose. There is no other purpose to the holiday. It’s not to attach to any other issue, not to attach to any political agenda; it’s not to protest a war or support a war; it’s solely to remember those who died and for families to remember their loved ones ... That is what it is, and we’re losing that. If you were to go to Israel on Memorial Day, towns [there] shut down. There’s a moment of silence across the country. And we just don’t do these things in the United States. Unfortunately, it’s hard, because most Americans truly assume it’s the beginning of summer break and they’re going to take their kids to the beach and have a big cookout. It’s lost its way. And ... that’s on the people who served more than anyone else, because it’s up to us to remind people of what it’s supposed to be.