Karl Rove and Politico team up for new slur: Now Hillary Clinton is “old and stale” 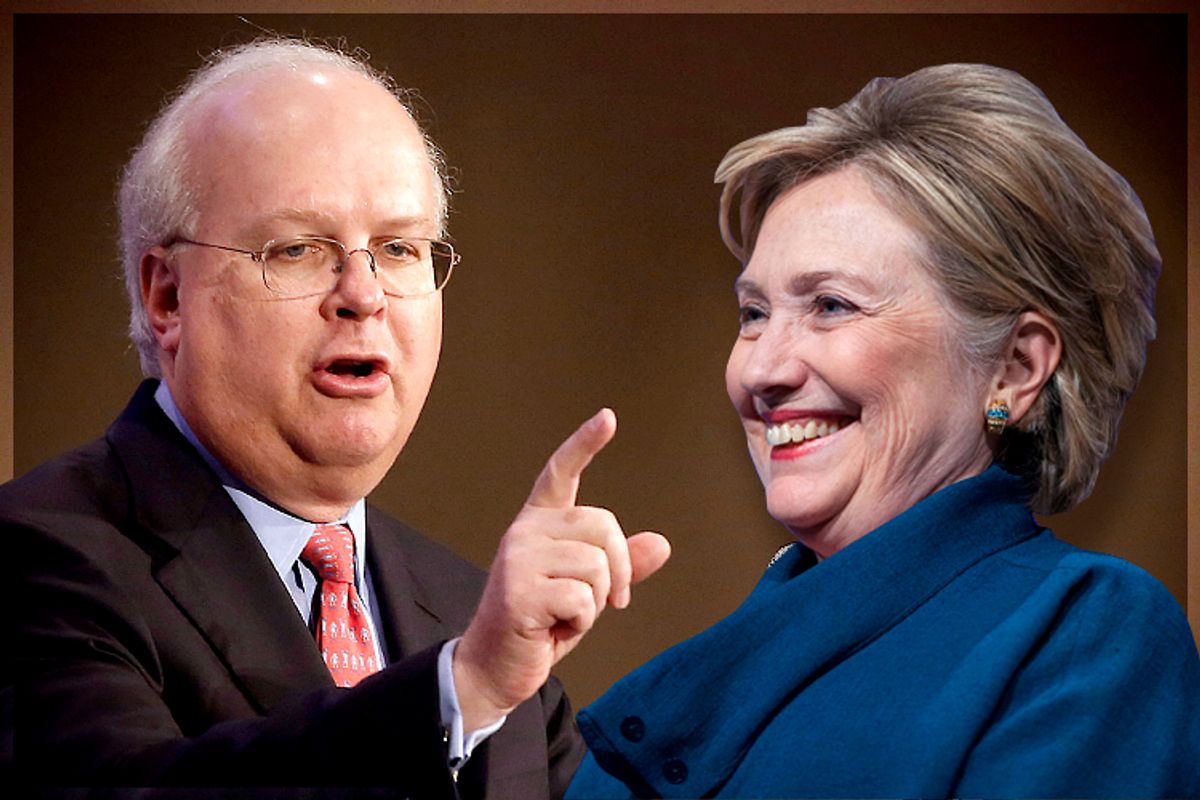 The GOP doesn’t have a strong 2016 contender yet, and it almost certainly never will. So Karl Rove continues to fill the vacuum during his party’s sad interregnum.

Last seen braying about how Hillary Clinton’s “traumatic brain injury” might keep her out of the race, this weekend Rove went lower, by some measures, declaring her “old and stale.”

Now Rove is as old and stale as they come, but that’s his genius – strike at his opponent’s strength at a precise spot where his side is actually the weakest, to play tough and crazy. Thus George W. Bush, who went missing during his Vietnam War National Guard service, attacks decorated war hero John Kerry for his Vietnam record in 2004, and gets away with it.

But the Politico piece on Rove’s attack treated it as more than just another Rovean slur by claiming that the veteran GOP trickster was actually saying what some Democrats are thinking. To do so, it linked to another Politico piece, by Maggie Haberman, which alleges that many Democrats aren’t so much “ready for Hillary” as “wary of Hillary” (more on that later).

Unfortunately for Politico, its Rove piece unravels entirely when it acknowledges that Haberman’s article “was not directly referred to during Rove’s segment” where he called Clinton “old and stale.”  So let’s be clear: Rove wasn’t speaking for any Democrats. He wasn’t articulating the concerns of Clinton’s party or voters. He’s just up to his usual dirty tricks, undermining a formidable rival.

One Politico piece debunked, one to go.

Except I’m not going to debunk Haberman’s “Wary of Hillary” work. She’s a good reporter, and I’m sure she is talking to some Democrats who privately express these concerns. Yet the piece is light on on-the-record quotes expressing same. California Gov. Jerry Brown is depicted as a Hillary skeptic, and privately, he may be (there is no great love between him and the Clintons). But what did Brown actually say to show he's "wary" of the former secretary of state?

Haberman quotes an ABC News interview, in which he opined, “She’s got the capacity. But like any front-runner, she has to be cautious and wise in how she proceeds forward.”

That’s devastating. Or maybe not so much.

She ties that not-so-scathing criticism to Massachusetts Gov. Deval Patrick’s slightly more pointed musings about Clinton’s “inevitability” on CNN earlier this month. “She is an enormously capable candidate and leader, but I do worry about the inevitability, because I think it’s off-putting to the average voter,” Patrick said. “And I think that was an element of her campaign the last time. As an enthusiastic Democrat, I just hope that the people around her pay attention to that this time around.”

It turns out that all the Democrats quoted, as Haberman herself admits within the story, are not so much “wary of Hillary” as they are “anxious about the spectacle of a Clinton juggernaut, after seeing what happened when she ran a campaign of inevitability last time.”

In that case, you can count me among the "wary" – not of Clinton herself, but of another campaign of inevitability. I wrote about that 18 months ago. But I have no reason to think she’ll run such a campaign.

And in fact, most of the people Haberman quotes are very ready for Hillary. “Secretary Clinton’s inevitability, or what appears to be inevitability, is something that is happening [on its own],” former Ohio Gov. Ted Strickland, a Clinton supporter, told Haberman. “So what to do about it? You accept it for what it is — a grass-roots movement.”

There you have it, folks. Democrats have a big problem. They have a candidate with towering popularity, whose candidacy is being demanded by “a grass roots movement” of voters, not to mention the party's biggest donors. Republicans, meanwhile, are looking forward to another bloody primary campaign with enough fringe candidates who will force the party right and terrify independents and hand the White House to virtually any Democrat who gets the nomination. But they’re in the catbird seat, and the Dems are in disarray. There it is, that old Beltway routing: Lather, rinse, repeat. Wake me up in November 2016.