Farzana Iqbal, who was 25, was beaten to death outside a Lahore courthouse while a crowd of men looked on 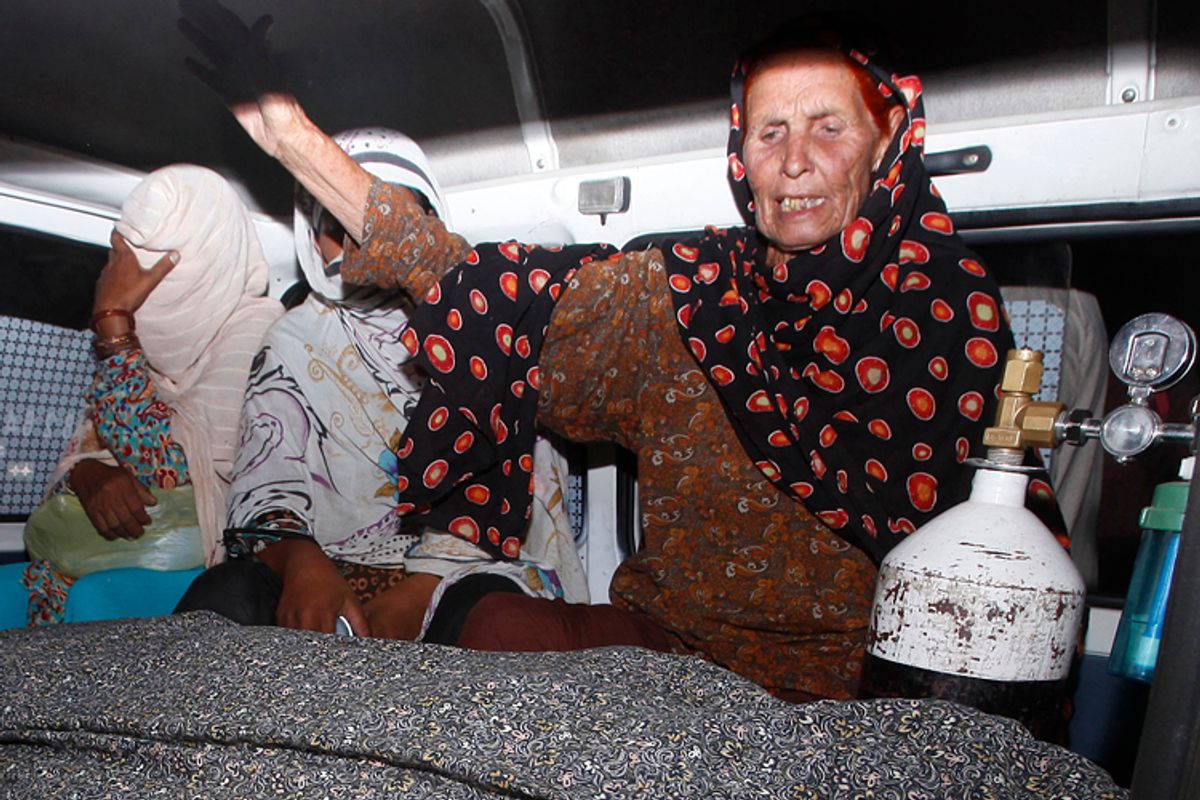 Relatives mourn over the body of Farzana Iqbal, in an ambulance outside of a morgue in Lahore May 27, 2014. (Reuters/Mohsin Raza)
--

A Pakistani woman who was three months pregnant was murdered outside a Lahore courthouse after she married a man from a neighboring village rather than the cousin her parents had ordered her to marry. Farzana Iqbal, who was 25, was beaten to death on Tuesday while a group of 30 men looked on, according to a report from the New York Times.

Iqbal was on her way into the courthouse to testify -- contrary to what her parents had argued in a police complaint -- that she was not kidnapped or coerced into her marriage, but that she had chosen to marry her husband. “Farzana was here to tell the court that she married of her own choice,” Rao Mohammad Kharal, Iqbal's lawyer in the case, told Agence France-Presse.

As she met with her lawyer early in the morning, a large group of men from her home village gathered outside the lawyer’s offices. The crowd attacked her as she walked the short distance to the city High Court.

One of [Iqbal's] brothers stepped forward and fired a gun at her, but missed, the police said, and she stumbled and fell as she tried to flee. He caught her and beat her on the head with bricks from a nearby construction site.

A crowd of witnesses, including her father, failed to intervene during the beating, and [Iqbal] died of her injuries, the police said. Her brother fled the scene, and the police later arrested her father, Muhammad Azeem, over the killing.

In an interview from the jail where he was being held, Azeem said that he had killed Iqbal to preserve his family's "honor."

The Nation, one of Pakistan's largest newspapers, denounced the murder. "The familiar brand of barbaric 'justice' yet again triumphs over the written law of the land," read one editorial, according to CNN. "Another case is settled outside the courts. Another woman, in search of justice, stoned to death, in the name of honor." Police investigator Rana Mujahid told the Associated Press that police would apprehend the people involved in this "heinous crime."

As the Times notes, the independent Human Rights Commission reported that 869 women were "stabbed, shot, beaten or burned to death" in honor killings in Pakistan in 2013. These crimes were generally committed by close family. The United Nations Population Fund has estimated that as many as 5,000 women and girls are murdered each year by members of their family in so-called honor killings.