The story behind #AskChevron: How a group of environmentalists hijacked Twitter 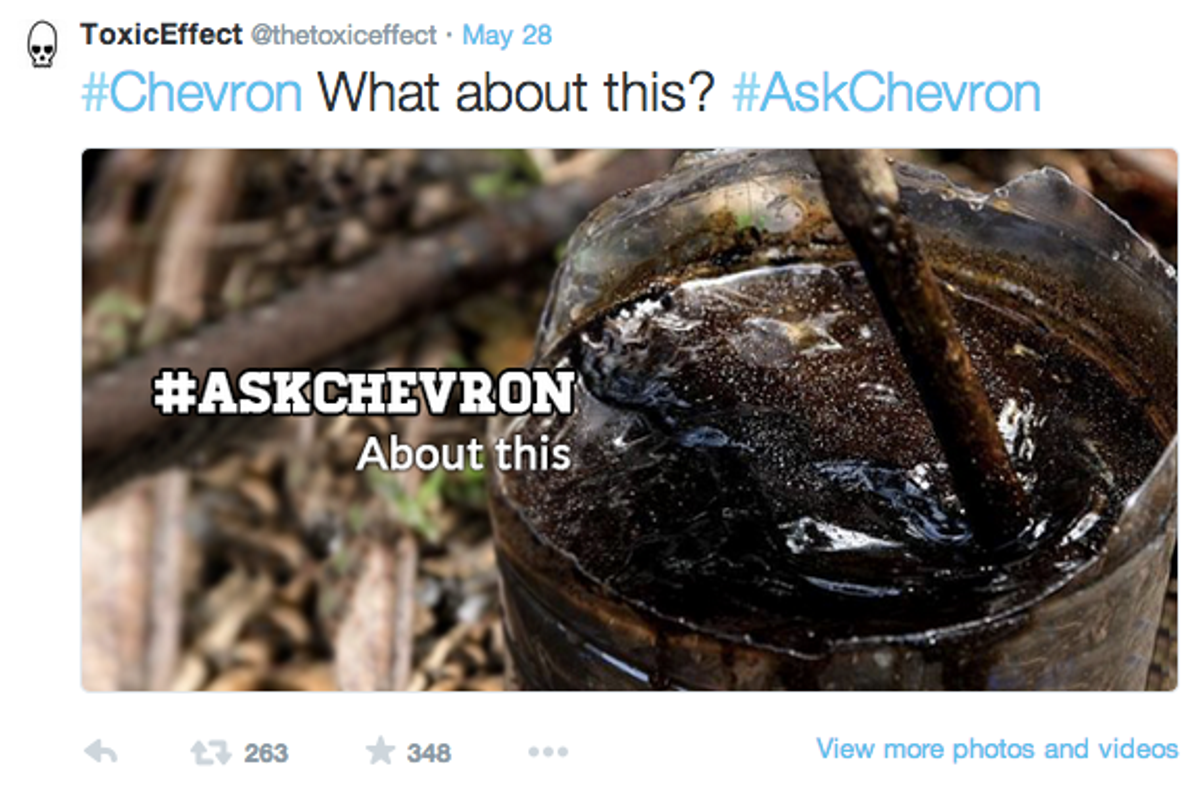 A group of activists enraged about Chevron's history of pollution in the Ecuadorean Amazon spent a year raising the funds to imitate a corporate P.R. campaign, "brandjacking" the company on Twitter in order to raise awareness of its misdeeds on the day of its annual shareholders meeting.

Anyone with $200,000 to burn can pay to promote a trend on Twitter, a fact that the nonprofit environmental group Toxic Effect exploited to call attention to its hashtag, #AskChevron. The campaign, members of the group told Salon, was inspired by the social media disaster inadvertently engineered  by JPMorgan, whose #AskJPM hashtag resulted in humiliation for the company. It appeared to fool some users on Twitter who, seeing the hashtag, thought that Chevron itself was promoting it -- and gleefully replied with disparaging comments aimed at the company.

Salon spoke over the phone on Wednesday with three members of Toxic Effect as they protested outside Chevron's annual shareholder meeting in Midland, Texas. (Wary of having poked a giant, they all asked that their last names not be identified.) The group, whose members mostly hail from South American nations, said they collected donations from "hundreds of people all over the world" in order to promote #AskChevron for the day: As of this posting, it's been tweeted over 9,000 times.

This new example of Twitter activism is but the latest in an ongoing campaign to hold Chevron responsible for decades of pollution in Ecuador carried out between 1972 and 1990 by Texaco, which Chevron later acquired. After 17 years of legal battles, an Ecuadorean judge in 2011 ruled on behalf of 30,000 local residents that Chevron was liable for contamination; last year, the country's Supreme Court upheld the ruling and the original $9.5 billion verdict, throwing out punitive damages that would have more than doubled the penalty. Chevron, which maintains that Texaco successfully cleaned up the site years back, in a $40 million effort, has not paid the judgment, which it calls "illegitimate and unenforceable."

"The aim of the protest was not to be aggressive," explained Michelle, one of the activists. "We feel like we're not going against the company. We just want to ask them, 'Why aren't you paying for what you did in the Ecuadorean Amazon?'"

This was a point that the members of Toxic Effect reiterated multiple times: "We're not directly against Chevron. We want the funds to be paid to repair the damage. That's it. Then everyone can move on."

But it's the protesters' tactics, and not just their message, that people are paying attention to. "This leaves brands in a very precarious position," the business magazine Inc. commented. "If Twitter's self-serve platform allows anyone to advertise, there's absolutely nothing to stop this type of activism."

Chevron, unsurprisingly, chose to ignore the outcry on Twitter, but acknowledged that it didn't go unnoticed. "We view this as nothing more than inconsequential noise," the company responded in a statement. "The time and money spent on this stunt would be better spent helping the people these groups claim to represent.  Those who continue to advance the fraudulent claims against Chevron, including PR agencies, are not being transparent or honest."

"Wouldn't it be more practical if they actually assumed the responsibility, so that people like us don't have to take the time off of our work and spend money for this?" responded Martin, another member of Toxic Effect. "I mean, we're talking about a $9 billion suit."