Tori Amos: "I don’t know what you’re taking, but please can I have some, too?"

"Menopause is a pain in the ass," says the iconic musician, whose new album is inspired by fears of middle age 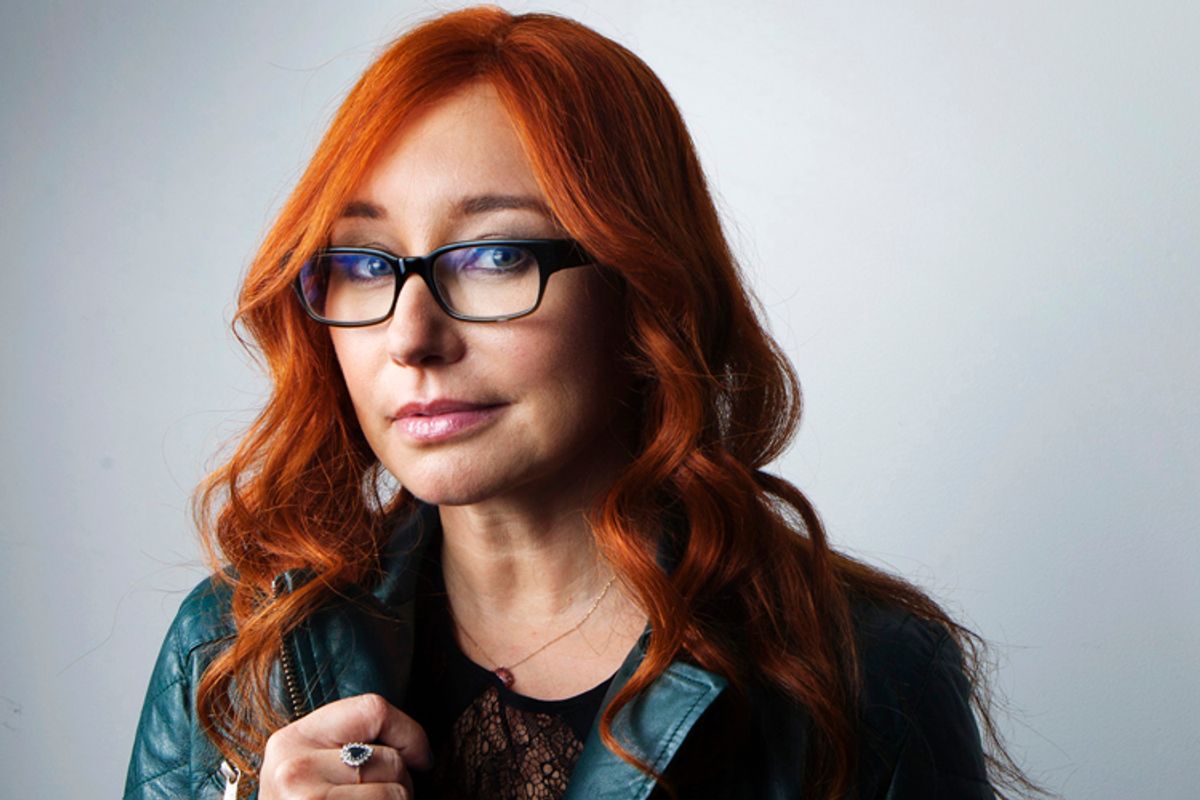 “Are you telling me it’s over, disintegrating, lost, and there’s nothing I can do?” Tori Amos asks on “16 Shades of Blue,” the centerpiece of her fourteenth studio album, “Unrepentant Geraldines.” It’s a sharply barbed question, one the singer-songwriter-pianist has been contemplating a lot lately. Specifically, the question was inspired by her fears and regrets as she approached her 50th birthday and began contemplating not merely her own mortality but her changing role as a middle-aged woman in society. “16 Shades of Blue,” however, is about the pressures women of all ages face. “At only 15, I said 15, they say her future's bleak, she should have started this at three.”

Amos found consolation in visual art. “16 Shades of Blue” was inspired by Paul Cezanne’s 1870 still life “The Black Clock,” which lends the song some of its darker imagery (“if the clocks are black, absorbing everything”) and offers defense against the arguments she hears against her age. On one hand, art is not the province of youth, and experience can grant new wisdom and perspective. On the other hand, middle-aged women aren’t exactly valued in the entertainment industry.

And yet, “Unrepentant Geraldines” debuted at No. 7 on the Billboard album chart, selling approximately 20,000 copies in its first week. That may not match the big numbers during her run in the 1990s, but in the 2010s it’s a strong showing for any artist, especially one whose last three albums were ambitious outliers in her catalog: a collection of centuries-old solstice hymns, a song cycle about time-traveling shapeshifters, and orchestral reimaginings of old material. For that reason, “Unrepentant Geraldines” has been billed as a comeback, as much for its pop-oriented songwriting as for its emphasis on voice and piano.

Those two instruments made Amos an unlikely star in the 1990s, as albums like 1992’s “Little Earthquakes” and 1994’s “Under the Pink” blurred the distinctions between pop and classical. Her most challenging album, 1996’s “Boys for Pele” (whose cover showed her nursing a pig), was also one of her most popular, and she has refused to shy away from any concept, whether it’s a gender-flipping covers album or a melding of Greek mythology and contemporary life. More than 20 years into her career, she has crafted one of the richest, wiliest, most idiosyncratic and most  accomplished catalogs in contemporary pop music.

Still, “it’s been a while since I was out there alone with a piano,” she says, adding that her last truly solo tour was back in 2005. Since then she has toured with backing bands and string sections and has even played a few dates with full orchestras. “It’s different when you play with an orchestra. You don’t jam. There’s no improvisation. It all has to be on the page, whatever you’re doing. So you can’t change the setlist up. Everything has to be rehearsed. But when you’re playing alone, you can make changes and take the show wherever you want. It takes a lot of stamina, though.”

Speaking from Berlin, where she played a small show for European media and contest winners, Amos spoke to Salon about how she responds to art, how she conceives of being 50 and how her daughter motivated her to make “Unrepentant Geraldines.”

This seems like a pretty solitary album. You wrote the songs in secret and played most of the instruments yourself.

The record was made between me, Mark Hawley and Mac Aladdin. I played all the keyboards on the record. I had to fit in recording sessions wherever I could, as I was finishing a commitment with the National Theater and there was certain rehearsal time set aside for that. And I was completing the Deutsche Grammophon project [“Night of Hunters”], so it really was a matter of writing and recording whenever I could find the time.

One of the main themes of this album seems to be the connections between music and visual art. How do you engage with art? Do you have time to visit museums?

Mostly in books. If I’m traveling, then possibly online. Sometimes, when I’m able to break away and get to a museum, then I’m a lucky gal. I try to expose myself to art in different ways — any way I can. Going to a different medium can be a good way to take in new information. There’s a freedom in that. When I’m looking at something, I begin to hear melodies and structures or whatever, so I’m beginning to get to something. I couldn’t last a day in an art lecture, because I have no idea what those people are talking about. It’s way over my head. I don’t get it like that. I just start to hear music. And that’s when I figure I’m understanding something about the art.

“16 Shades of Blue” is about Cezanne. What was your experience with his work?

For a long time I never heard anything when I would be exposed to Cezanne. I just didn’t get it. People would look at me and say, you’re not giving this a chance. Well, I think I am but I just wasn’t responding. It doesn’t mean anything. Cezanne’s life isn’t changed by the fact that some crazy redheaded person doesn’t get it. That doesn’t change who he is or what his art is. His art is what it is. Eventually, it just started happening, and once I began to hear him, then “16 Shades of Blue” started to develop, especially when I was looking at the black clock with no hands on it.

It sounds like you do not compartmentalize these two artistic pursuits.

They feed each other. I was reading this book about Rilke, and… well, first let me say that I can be disputed on everything I tell you about art. I’m a musician. I can stand by the songs, and I’m fine if I get my facts wrong about art. So, in this book Rilke was saying that Cezanne was working with 16 different shades of blue at least. I don’t know if they were all on his palette at one time. I don’t know if that’s what he meant. It doesn’t matter to me because I loved that phrase, “16 Shades of Blue,” especially what it means now in popular culture. It’s a play of words. I’m turning 50, so I thought, okay so if 50 is supposed to be the “new black” in our society, then what does that mean? It means that every age has its challenges. All kinds of people have told me all sorts of stories about that in the last week, about not wanting to even think about turning 50. And when you talk to twentysomethings, they don’t even want to think about that prospect. But guess what? I know something you don’t know! I was so surprised to see how people of different ages were all struggling with certain challenges.

For instance, most kids have to choose a career when they go to college, but not everybody knows what they want to do when they’re 18 years old. They’re just not ready. Some of them are. Give them a gold star. Lucky them. I knew what I wanted to do, but I was talking to a lot of people who were having to decide when they were so young. And there were others who had made that decision and owed a lot of money on their loans. They couldn’t find a job and felt they’d made the wrong decision. They were feeling lost. So the song goes on: the woman in her thirties who really wants that VP job at the bank but thinks, Oh my god, if I take off right now to be part of the baby-making miracle, then what if they give the position to someone else? Women were telling me this. And then you’ve got Husband in the other ear saying, You know what, Wife? Women don’t have a copyright on the age thing. If you don’t think men aren’t considering how they’re going to get their leg over their motorbike, you’re not thinking this through. Of course, I don’t want to think about my guy not getting his leg over the motorbike. That’s not very sexy, because that’s my man!

It sounds like you have a lot of interaction with your fans. Is “16 Shades of Blue” based specifically on stories you’ve heard on the road?

Yes. That is based on stories I’ve heard. There are always stories you hear from people that make you see life in a different way. You don’t think about certain ideas until somebody tells you — or you did think about them but forgot about them, perhaps because you chose to forget. I’m in a blissful state. I forget most things. Why do you think I keep touring so much? I can forget the pain!

Given how much age defines this record and gives you a new perspective, do you have a new relationship with the songs you wrote when you were 25 or 30?

That’s a good question. I’m about ready to find out, because I'm going to be playing them very soon. Tash [Amos’ daughter, Natasha] said to me at a certain point, Alright already! Stop! We would talk about how there are more men getting record deals at 50 or older than women. I’m not talking about great hits; I’m talking about frontline. You know what I’m talking about. It’s not an opinion. You can do the fact-check. So, Tash finally said, Enough already! You get to go make an album. Go be great! Get out there and rock, Mom! No, actually she said, [in Irish accent] Bloody hell! What am I going to do if you don’t figure this 50 thing out? That’s not really great for me. She didn’t say this word, but you think it’s tragic, don’t you?

Is it something to figure out, the 50 thing?

It’s not a lot to look forward to. Menopause is a pain in the ass, okay? It is. It’s not fun. There was a point when women on the other side would look at me and say, Once you’re out of it, you’re just going to be thrilled. I remember looking at them and saying, I don’t know what you’re taking, but please can I have some, too? But when I stared thinking about it, I realized that teenage girls moving from girlhood to womanhood were going through a kind of chemical process similar to the internal shifts that women go through in their 40s and early 50s. So there is a perspective that you can step into that gives you a sense of humor and makes you more chilled out about certain things. You learn as you go. Nobody gets it right all the time. Could I have been a little more compassionate in the elevator today? Maybe. I don’t know. There has to be a level of forgiveness that we grant ourselves. So, if I have the opportunity to create music, then I’m going to grab it with every cell of my being. I’m going to say: Alright, Tash, I’m going to go rock. I’m going to make you proud.