GOP nuts find a new Benghazi: What happens next in the Bergdahl flap

"Republican strategists" are running the Bergdahl controversy. And that means a certain target won't be far from it 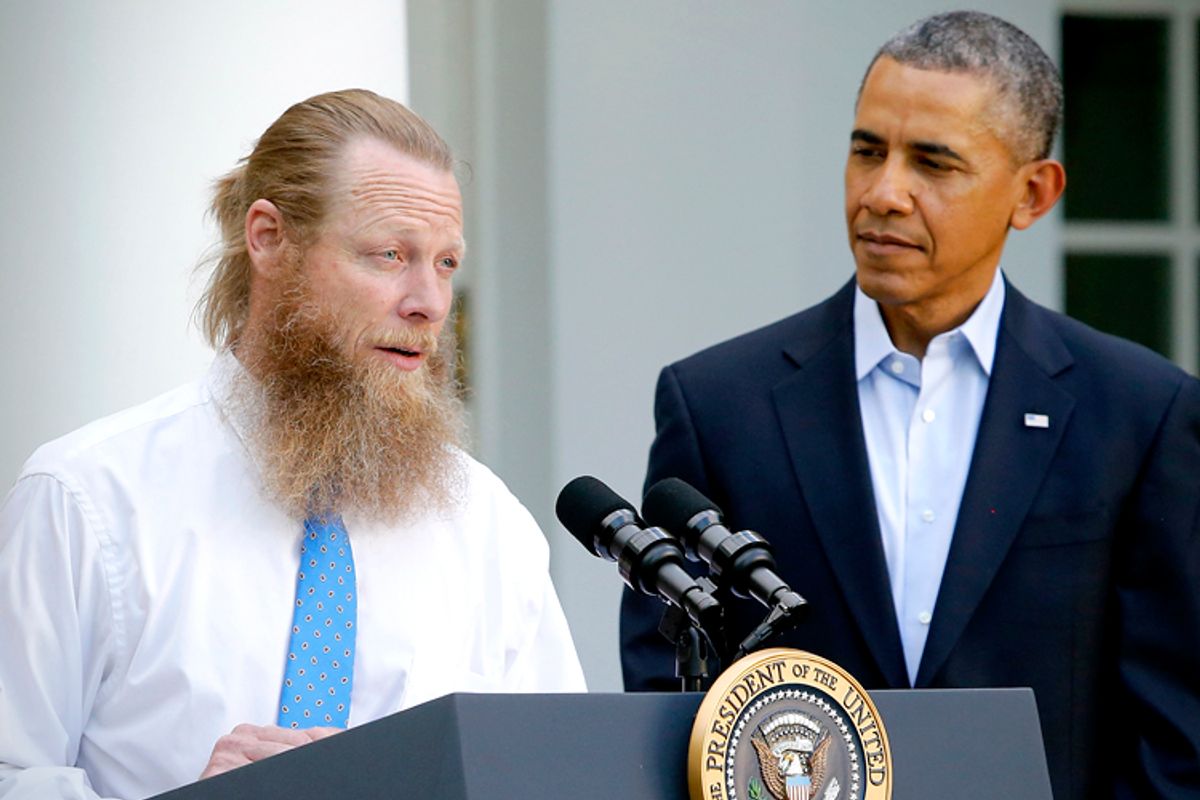 We have a bright new dividing line in President Obama's second term: there was everything that happened up until this weekend's prisoner swap for Sgt. Bowe Bergdahl, and then there was everything afterwards. There was the IRS, the VA, Obamacare, and Benghazi, and now there is Bergdahlzi. Republicans can hardly contain themselves. We've got a hot one here!

There is no more loaded description in the Bergdahl coverage this morning than this single prepositional phrase in a New York Times report:

“Yes, I’m angry,” Joshua Cornelison, a former medic in Sergeant Bergdahl’s platoon, said in an interview on Monday arranged by Republican strategists. “Everything that we did in those days was to advance the search for Bergdahl. If we were doing some mission and there was a reliable report that Bergdahl was somewhere, our orders were that we were to quit that mission and follow that report.”

Bergdahl, once he's had some time to recover, will have the opportunity to explain his side of the story, why and whether he deserted his fellow soldiers, and so on. It's fair to hold off judgment until then. But conservatives have already determined, as my colleague Elias Isquith explains, that Bergdahl does not meet the standards of their fairytale version of the Good Soldier, so the U.S. government should have just left him to rot in an Taliban prisoner camp forever. Go ahead and arrange those calls, Republican strategists.

We use the phrase "Bergdahlzi" with some hesitation. It's obvious. It's not clever. However! The political parallels with Benghazi -- not the Benghazi incident itself, but the multi-year #Benghazi circus that's come in its wake -- are impossible to avoid noticing, and we might as well run through them. Besides, conservatives themselves are already taking a shine to this term.

What should be an endless parade of House hearings are on the way. Senators Lindsey Graham and John McCain, the self-appointed arbiters of all things good and evil in foreign affairs, are losing their shit. Susan Rice's Sunday show talking points are once again a source of grand controversy -- expect to hear mockery of Rice's claim that Bergdahl served "with honor and distinction" at conservative conferences for approximately the next 173 years. The attention-seekers who seek attention by calling for "impeachment of Barack Hussein Obama" every time he sneezes are calling for the impeachment of Barack Hussein Obama.

But there's another path this story could go down, should Republicans choose to take it that way, that would really bake the Bergdahlzi cake: making former Secretary of State Hillary Clinton a focus of the controversy.

A piece at The Hill, ominously titled "Prisoner swap: Did Hillary know?" reports that "Republicans are raising questions about whether Hillary Clinton knew about the White House plan to release senior Taliban commanders in exchange for the last U.S. prisoner of war." What did she know? What we know, at least, is that Obama and Clinton had lunch last week. Was that where secret overlord Hillary Clinton gave Obama her permission to use his presidential powers?

“If Mrs. Clinton remains politically active, people will want to know what her advice was on the subject,” said Sen. Jeff Sessions (Ala.), a senior Republican on the Senate Armed Services Committee.

Sen. Lindsey Graham (R-S.C.), a member of the Senate Armed Services Committee, said questions about the meeting are fair game.

“It’s fair game to ask her, “Did she know about this, what does she think about it, does she agree with the decision to withdraw troops in 2016?” he said. “These are all really good questions potential candidates for president need to answer.

“These are major policy decisions. This has ramifications long term for the U.S., this prisoner swap,” he added.

Well of course she can be asked to give her opinion on it. She already has! One can call her comments a very hedged defense of the action.

Jeff Sessions' use of the qualifier "If Mrs. Clinton remains politically active..." tells us a lot. If she is to be a key player in the upcoming investigation, it shouldn't matter whether she is or isn't politically active. If a committee has cause to ask her about what role she played in the decision, they can subpoena her whether she's a candidate for office or merely a lucrative speech-giver on the private circuit. But that presumes that fact-discovery would be the principle goal of such an investigation.

If Clinton becomes a major target in this story, all because she had lunch with President Obama last week, it would be another telling data point of where Republican priorities are. What fun is it just to badger a lame duck like Obama? It's much more useful to fling all mud in Clinton's direction, however tangentially she may or may not be involved. And since we know that "Republican strategists" are now running the Bergdahl show, such a an obviously forced leap of focus isn't out of the question.