But if it follows this advice, it could also be the first Asian American sitcom to find huge mainstream success 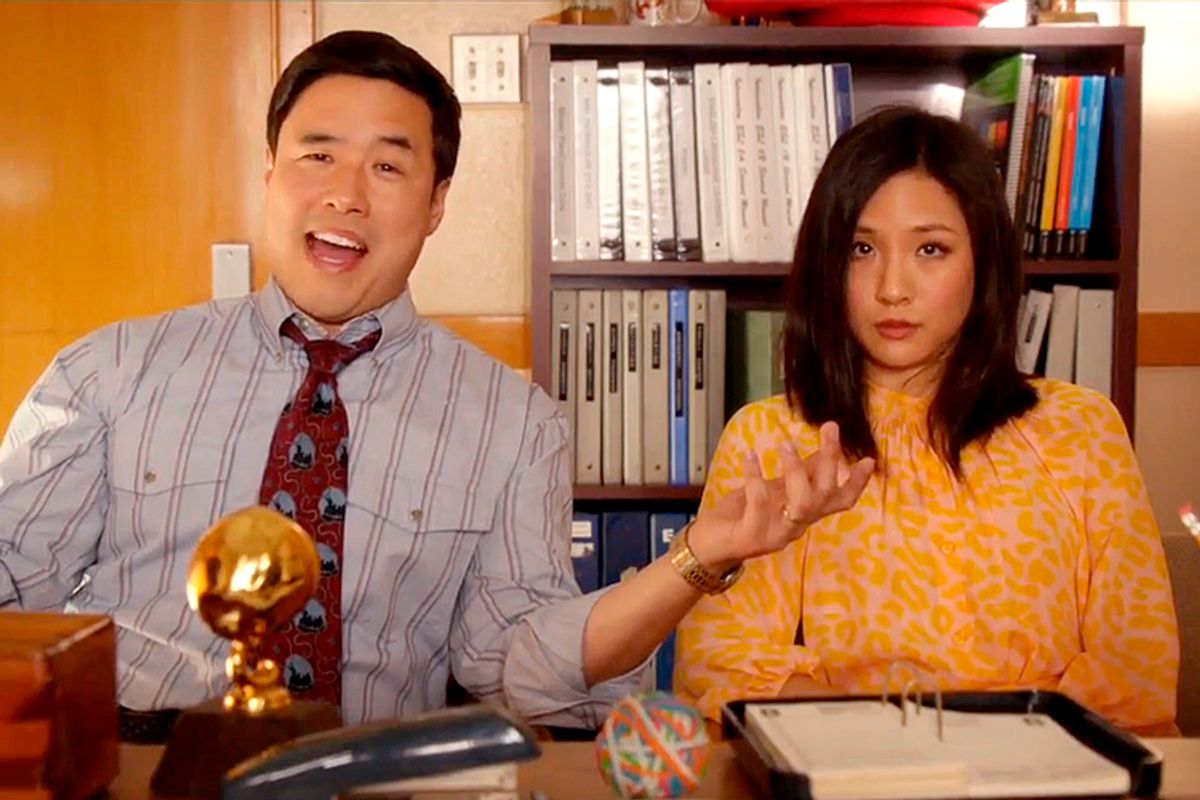 Randall Park and Constance Wu in "Fresh Off the Boat" (ABC)
--

I can’t speak for all Asian Americans, but personally, whenever I see a new Asian face on television, I panic. My blood pressure goes through the roof. There’s a vague unease and anxiety, even before the character opens his or her mouth. Because I’m ready to see yet another shticky Asian stereotype.

Or I worry that the Asian character is “too good” – an overcorrection for political correctness. There’s an ironic flaw to perfection – it doesn’t allow for the quirks that make a character compelling. Every American minority group has this stock, “perfect” caricature: for Asian Americans, it’s the Model Minority – the hardworking, emasculated genius. He’s the support for the protagonist, but never the protagonist himself.

Minorities sometimes encourage these positive stereotypes. Too often, we’ll take what we can get – we’ll accept scraps off the table, even if we’ll never be allowed to sit at the table. When I was growing up, I enjoyed the stereotype that I was smart in math. I used the kung fu stereotype to ward off a bully in 5th grade. I did not understand affirmation through omission – that if I embraced the positive, Model Minority stereotypes, then I inherently gave credibility to the negative stereotypes as well.

Conflicted. Flawed. Agitated. These are the makings of any great character. Unfortunately, on the rare occasion that an Asian is cast in a lead role, the Asian community wants his or her character to represent everything important, all at once. Though it’s an understandable, emotional reaction, it’s also unfair. No single character or single show should bear such weighty expectations, or be expected to atone for decades of marginalization.

This fall, a new sitcom will debut on ABC called “Fresh Off the Boat.” It stars Randall Park and Constance Wu, and it introduces Hudson Yang, son of Asian-American writer Jeff Yang. Loosely based on Eddie Huang’s eponymous memoirs, “Fresh Off the Boat” is about a Chinese family that moves from Washington, D.C. to the predominantly white suburbs of Orlando, Florida. The father and mother, Louis and Jessica (Park and Wu), try to open a barbecue restaurant and adjust to the culture shock. Meanwhile, their son Eddie (Yang) tries to make new friends and fit in at his new school.

It’s like seeing Bigfoot – an Asian American sitcom, on primetime, on a major network. The last time Hollywood attempted this, it did not go well. In fact, the last attempt was 20 years ago. That’s how badly it went.

In 1994, Margaret Cho debuted a new sitcom on ABC called “All-American Girl” – even its title was an exercise in overcompensation. It ran for exactly one season, and it was fraught with problems. The writing was awkward, the characters were simplistic, and Asian American critics savaged the show. By the time the finale aired, the producers had fired nearly the entire cast. The show was retooled again and again, in an attempt to make it palatable to an audience – any audience.

Margaret Cho has mined hours of comedic material from “All American Girl” - she did an entire stand-up special entitled “I’m The One That I Want.” She endured unbelievable humiliations—proof that truth is stranger than fiction. Some choice bits: the producers asked Cho to lose weight and more accurately portray herself.  The producers also told Cho that she wasn’t acting Asian enough, so they brought in an Asian expert to teach her.

Granted, this was twenty years ago. Popular culture has gotten better, not worse, in its depictions of minority groups. Just look at ABC’s “Modern Family,” which normalized LGBT relationships for many Americans. Cameron and Mitchell are unapologetically gay, but it is only one aspect of their complex identities. “Modern Family” breeds tolerance through exposure – gay men are not abstract, predatory converters. Rather, the subversive humor of Cameron and Mitchell is how “normal” and boring they are – they experience the same insecurities, minor conflicts, and parenting drama as Jay and Gloria, or Claire and Phil.

There are important lessons to be learned here – from a show like “All American Girl,” which tackled its minority issues badly, and “Modern Family,” which continues to tackle its minority issues well. “Fresh Off The Boat” has promise – a great cast and a great premise – but Eddie Huang and the writers should heed the following advice from an Asian American who is praying that this show is a mainstream success.

Firstly, be unapologetic in portraying the Asian experience. Don’t self-deprecate about “funny” customs and “exotic” food. It’s the difference between a joke that alienates and a joke that empathizes. Ethnic jokes are a must, but they should be intelligent and meaningful, lest they devolve into caricature and oversimplification. As for the American experience, one should balance the positive with the negative. For too long, Asian writers like Amy Tan have portrayed America as a one-dimensional, noble savior, liberating Asians from their exotic, backwards customs. The truth, however, is that assimilation is a difficult, multi-layered process. American culture is not homogeneously “good,” just as Asian culture is not homogenously “bad,” and one should not have to pick a side.

Secondly, the show should not exclusively and incessantly be about Asian issues. That will start to feel objectifying and old in a hurry. It may be odd advice to a show entitled “Fresh Off The Boat,” but this is the only way that the show can succeed on a larger scale. Asian Americans are not fixated on their heritage to the exclusion of everything else, forever “trapped between two worlds.” Instead, the show should portray well-rounded characters, with concerns and conflicts that are universal to all families. “Fresh Off The Boat” needs to be an Asian American family comedy, not an Asian American comedy. It needs to be character-based, not joke based – no modern sitcom can sustain itself on one-liners alone.

And lastly, to the other Asian Americans and well-meaning progressives who will be tuning in? Be easy on this show, at least at first. It may take awhile to find its voice, and it will probably make mistakes. It’s a cultural minefield out there – Eddie Huang can’t be the voice for every Asian American, and he shouldn’t try to be. It’s hard enough for Huang to be himself.