My personal Wal-Mart horror: What it's like working here as a mom 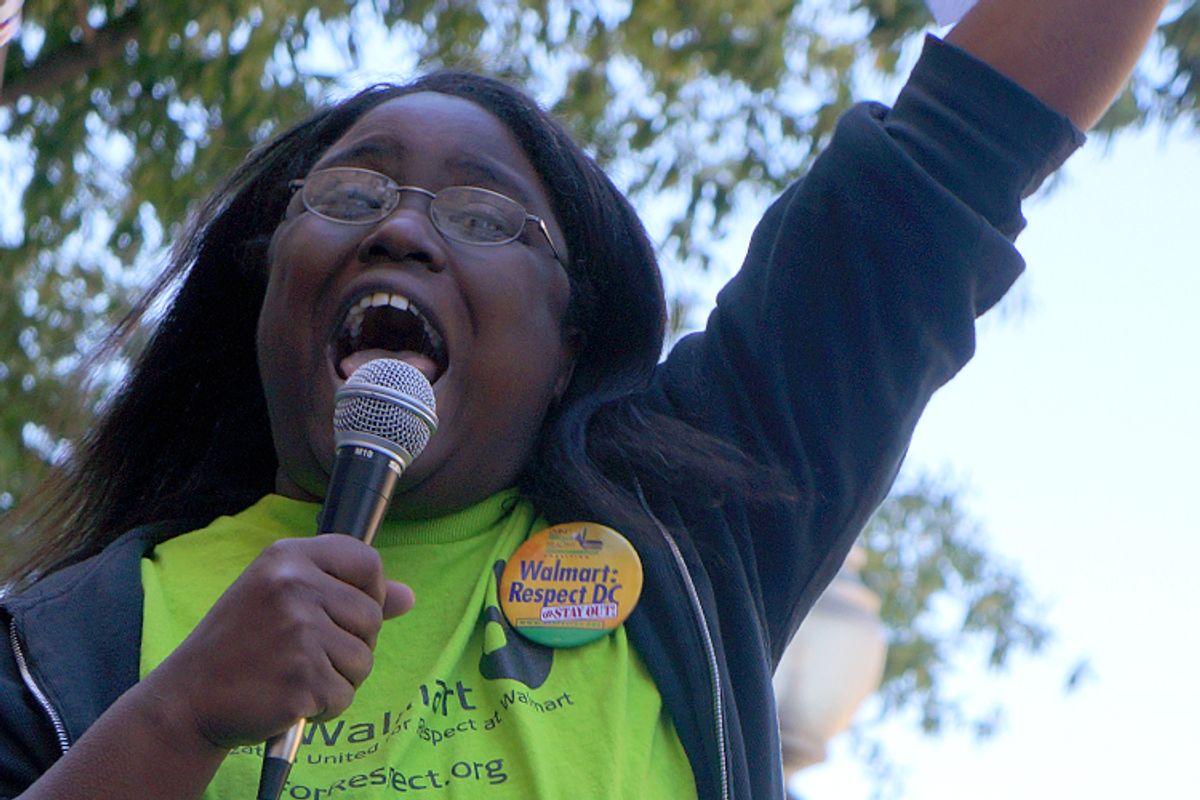 This Saturday, my daughter is graduating from high school. She’s worked so hard, and I couldn’t be more proud. Later this summer she will head to Eastern University in Florida, where I am proud to say she has received a full four-year scholarship.

But graduation itself has been a tough moment for my family. I recently had to choose between paying the electric bill and covering my daughter’s Tikia graduation fees. At the last minute, I got the school to give us a waiver.

I wish I could say this was the first time that I was deciding between bills, but this is a constant struggle in our family and a small example of what is means to be a Wal-Mart mom. As a parent, I don’t want to tell my kids that it is dinner or shoes, but that is what we are facing.

We work hard to provide for our families, but most days, there just is not enough money or time. I try to save money every way that I can – even getting on the bus and train for a two-hour round trip to get to work.

And trying to get enough hours to make ends meet and be around for my kids has been incredibly difficult with Wal-Mart’s scheduling demands.

At first, I had what Wal-Mart calls an "open schedule," meaning that I had to be available to work any shift, on any day.  My shifts were all over the place – a few hours in the morning one day, a few hours in the evening the next. And every week, it was different.

Finding childcare -- especially on short notice and with an irregular schedule – was a constant challenge. Ultimately, it became impossible to be available 24-7 for Wal-Mart.

Even though I was afraid of what it would mean to lose work hours if I changed my availability, I have to make sure my kids were taken care of. And with my change in availability, Wal-Mart cut my hours. Sometimes, I’m only on the schedule for 12 hours a week.

Even when I was working closer to full-time hours, my expected take-home salary was only $18,000 this year, but now that my hours are reduced, it's hard to know what I will bring home this year.

Perhaps not surprisingly, my family gets help. We rely on D.C.’s public healthcare system, food stamps, and we live in low-income housing.

Wal-Mart has a total disregard for its responsibility to provide good jobs to the 825,000 women who help make the company $16 billion in annual profits. And the truth is I wish that I did not have to rely on taxpayer-funded programs, but in the economy that Wal-Mart’s creating, this is our reality.

For other Wal-Mart moms – those who are expecting – things are really bad at the stores. Some, like Tiffany Beroid, are forced to choose between their jobs and their health when they’re pregnant.

Tiffany visited her doctor about midway through her pregnancy, and her doctor wanted her to stop working. But needing the money to keep food on the table for her 5-year old daughter and to try to put a few dollars aside for when the baby came, Tiffany instead asked the doctor for a note to request some small modifications and adjustments. Really, it was as simple as limiting heavy lifting and extra bathroom breaks.

Wal-Mart refused, and Tiffany kept working so she did not lose her paycheck, even against the doctor’s recommendation.

As the situation worsened, Tiffany had to take an unpaid leave. She was on full bed rest for the final trimester of her pregnancy as a result of the strain.

In March, after Tiffany and some associate-shareholders and women’s right attorneys had been calling on the company to make sure the policy was at least in line with the law, Wal-Mart changed the policy.

But after Tiffany spoke out about this, Wal-Mart fired her.

Now, how could a supposedly family-friendly company treat moms this way?

That is why Wal-Mart moms are on strike against this kind of illegal retaliation, which by the way, the National Labor Relations Board is prosecuting this week in the largest complaint in Wal-Mart’s history.

Moms are strong, and together our voices can make an impact. Even at the largest employer for women in the country.

We’ve seen our new CEO, Mr. McMillon, make some changes to improve jobs and staffing. But we need more, and we need them now. We need Mr. McMillon to lead Wal-Mart in a direction that our country can be proud of, and that means paying Wal-Mart moms, dads and all of us at least $25,000 a year and providing full-time work. We want protections for pregnant moms and respect on the job.

Gail Todd has worked at Walmart for over 2 years in Landover, Maryland. She is a member or OUR Walmart -- the worker organization calling on Walmart to end illegal retaliation, publicly commit to pay workers $25,000 a year and provide full-time work.