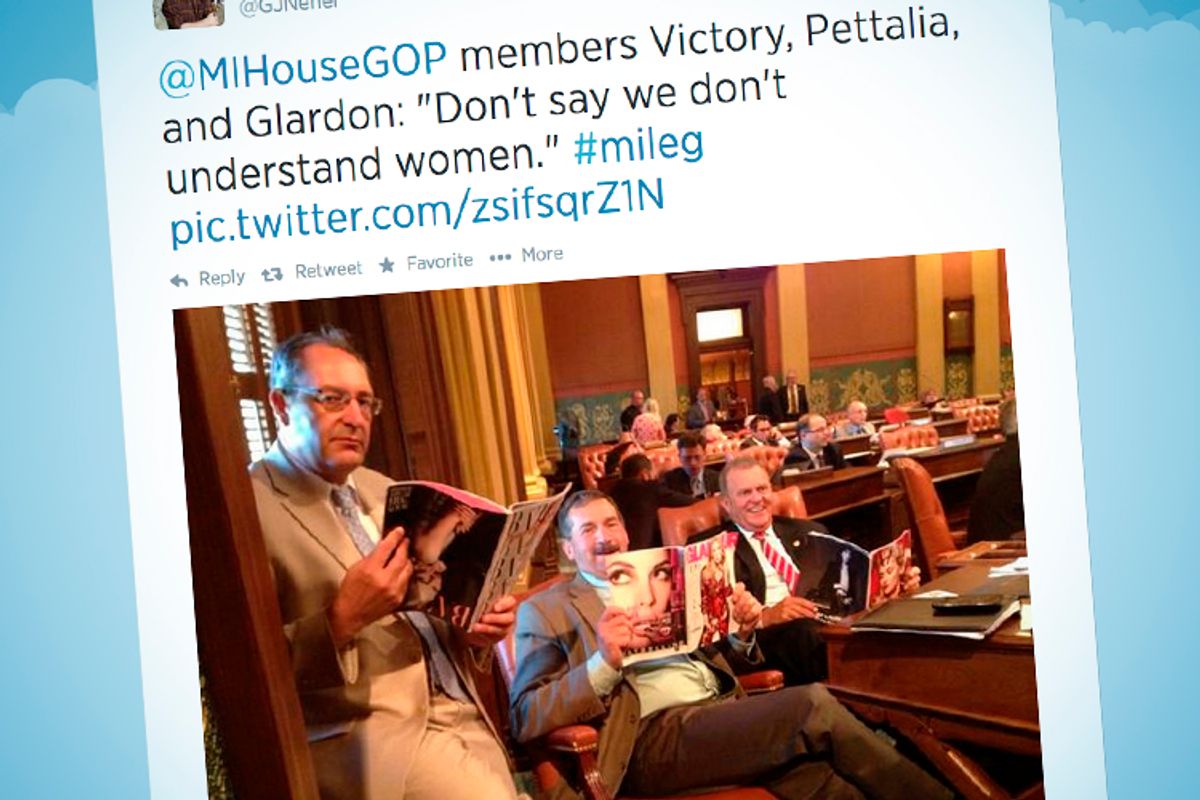 This week in the Michigan House of Representatives, a bunch of male representatives picked up some women's magazines. And boy are their arms tired!

In an image that could go straight into the stock photo file labeled "not getting it," Reps. Roger Victory of Hudsonville, Pete Pettalia of Presque Isle and Ben Glardon of Owosso appeared Thursday on the House floor wittily holding copies of women's magazines. Michigan Public Radio Network reporter Jake Neher tweeted the image out, noting that Pettalia joked, "a couple of times," in fact, "Don't say we don't understand women." It's funny when middle-aged white men do super-emasculating things like holding an issue of Glamour! It's funny because women's magazines often foist unrealistic body images upon women and it's funny because holding a magazine does not in fact indicate an understanding of your female constituency! It works on so many levels!

It gets even more HI-larious when you find out a little more about these guys who josh around about not understanding women. Behold, the guys who recently voted to approve making abortion coverage optional in insurance plans, aka the delightful "rape insurance" provision. They also voted in favor of a bill that would make welfare recipients perform community service, a feat that's challenging for, say, mothers with young children. Pettalia has also voted against late-term abortion, except to save the life of a mother. A "health of the mother" exemption was not included. Stop, you guys, you're killing me.

Pettalia later clarified the jokey moment, explaining, "During a short break on the House floor, Republican Rep. Gail Haines, a leading advocate on women's issues in the Legislature, gave some of us magazines to read and asked to take our photo with them. A member of the media then walked up behind her and snapped another photo. As part of that lighthearted moment, I made an off-the-cuff remark that has since been taken way out of context." So let's meet women's issues advocate Gail Haines, who did indeed two years ago helpfully propose a softened version of Rep. Bruce Rendon's stricter abortion regulations, suggesting fines instead of imprisonment for violations of stricter abortion clinic regulations. When the state pushed through what Planned Parenthood called "the biggest assault on women's health in our state's history," Haines, as committee chair, was notable for permitting "a very few of the 90 opponents of the bill who packed the committee room to testify or even have their position on the bills read into the record." And four years ago, in a bill that would force women to have "the opportunity to view the [ultrasound] image before performing abortion," she introduced a detail requiring "the ultrasound equipment used to be the most technologically advanced equipment in the facility." Nothing but the finest will do for your abortion-shaming technology. Ladies, you're welcome.

Ingham County Clerk Barb Byrum, who was one of the abortion bill opponents barred from speaking two years ago, noted Thursday that "The war on women is alive and well in Michigan. Now three Republican lawmakers today – all white men – made an open mockery of women on the House floor by posing with fashion magazines to showcase, in their words, that they understand women's issues." And the house Democrats quickly retorted with a photograph declaring that "Real Women read bills not fashion mags." (The sentiment is well-intentioned, but real women can read whatever they want, and you will pry the In Style out of my cold, dead, clumsily manicured hands.)

Though the phrase "Check your privilege" jumped the shark with Princeton kid, this is one of those occasions where a little privilege checking would not have gone amiss. Picking up some magazines from your colleague and laughingly jesting about your comprehension of issues that you vote on and are not terribly funny to the female human beings who are directly impacted by them is not so entertaining. And calling the whole shebang "lighthearted" just makes you seem like an even bigger clueless scuzbag, if possible. Gentlemen, may I suggest in the future you step away from the magazines and leave the comedy to the professionals? In short, don't quit your day jobs, fellas. Or do. That'd be fine by me too.