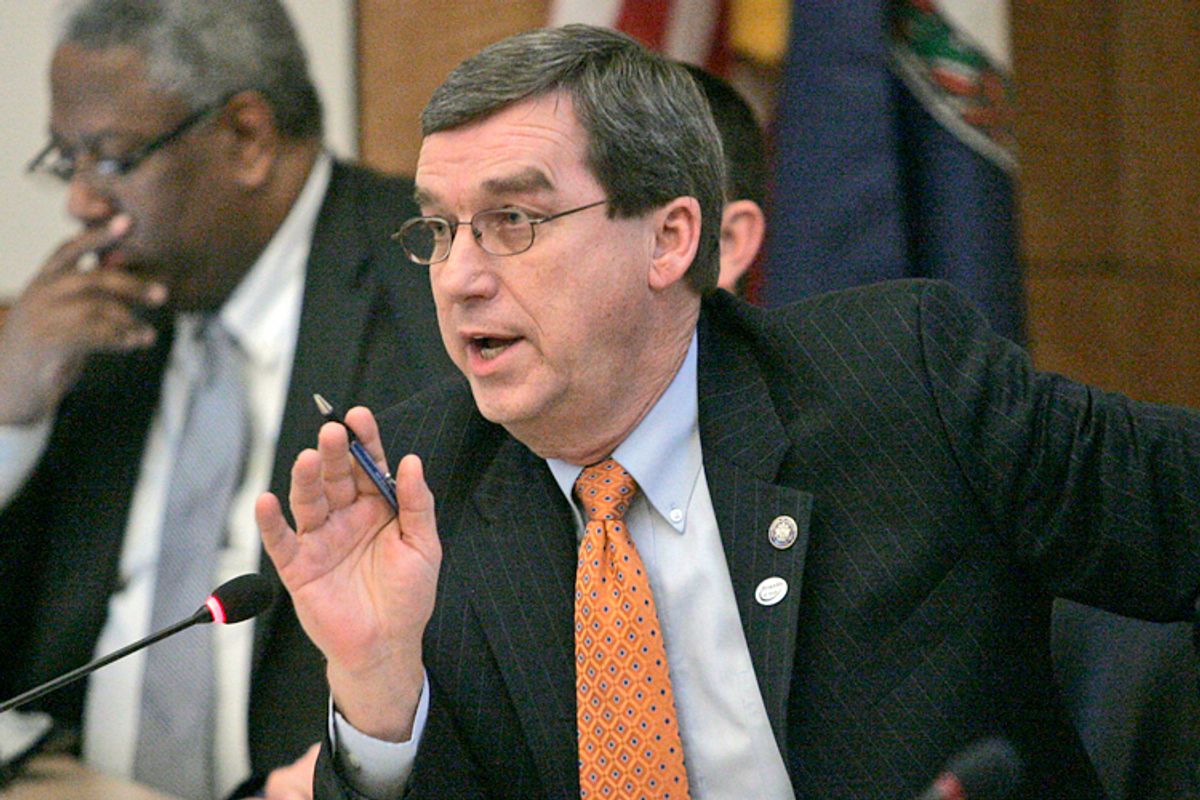 State Sen. Phillip Puckett, D-Russell, gestures as he poses a question during the Senate Committee on Agriculture, conservation and Natural Resources public hearing on a bill that would limit strip mining of coal, at the Capitol in Richmond, Va., Thursday, Feb. 11, 2010. (AP Photo/Steve Helber) (Steve Helber)
--

The fight to implement the Affordable Care Act’s expansion of Medicaid in Virginia has gone from frustratingly partisan to downright scandalous. If you haven’t been following the story, the government is currently deadlocked over whether to include a plan to expand Medicaid in the state’s budget. Gov. Terry McAuliffe and the Democrat-controlled state Senate favor expanding Medicaid through the budget, the Republican-controlled House of Delegates opposes it, and the state government will shut down if the impasse is not resolved by the end of the month. Now the whole process has been thrown for a loop by the sudden resignation of a Democratic state senator and allegations of political quid pro quo.

Yesterday the Washington Post reported that the Republicans in the House of Delegates “appear to have outmaneuvered Gov. Terry McAuliffe in a state budget standoff by persuading a Democratic senator to resign his seat.” The resignation will flip control of the Senate to the Republicans, who can now pass a budget that does not expand Medicaid. If that happens, McAuliffe will almost certainly veto it, and the GOP will take the opportunity to blame him for the resulting shutdown.

The resigning senator in question, Phillip Puckett, is now expected to become the deputy director of the Virginia Tobacco Indemnification and Community Revitalization Commission – a position appointed by Republicans in the House of Delegates. Hence the accusations of quid pro quo, which the Huffington Post said “appears to be outright bribery.”

Puckett’s resignation is curious, to be sure. Virginia’s WCYB reported on June 1 that Puckett told them that “pushing Medicaid through with the budget is the best way to secure coverage for more than 400,000 Virginians.” Two days before that he described the benefits of wrapping Medicaid into the budget to the Bristol Herald Courier: “The Medicaid piece could help the shortfall. If we took the federal money, and then worked into the budget the payment for the Medicaid expansion, plus other medical expense that we’d have money to do, it frees up money in other areas of the budget.” And then, less than two weeks later, he resigns his seat, blowing up the budget process and making the Medicaid expansion that much more unlikely.

It’s easy to get lost in the political drama, but the real story here – as it always has been – is the fight to expand access to health coverage for lower-income Americans. Puckett, by resigning his seat, is helping to ensure that the many thousands of Virginians who fell into Virginia's coverage gap remain there.

Puckett’s district, the 38th, encompasses the entirety of six counties (Bland, Buchanan, Dickenson, Pulaski, Russell and Tazewell) and portions of two others (Smyth and Wise). Each of those counties has poverty levels above the state average, according to the most recent census data. Of the 400,000 Virginians who would be eligible for coverage under expanded Medicaid, just over 20,000 live in the 38th Senate District, according to the Commonwealth Institute. Even if Puckett didn’t broker a deal with the Republicans, he has inexplicably acted against his own long-standing support of the expansion and made it more difficult for those people to obtain health coverage.

If a deal was reached between Puckett and the Republicans, then they'll have pretty well demonstrated the moral and ethical bankruptcy of the opposition to expanding Medicaid, and we’ll have had the misfortune of witnessing one of the more monstrous acts of venality in recent political history.