"The Tao of Martha": Inside the obsessive online subculture of Martha Stewart wannabes

They have Pinterests and Tumblrs. They make a mean DIY spice rack. Welcome to the growing world of Martha fanatics 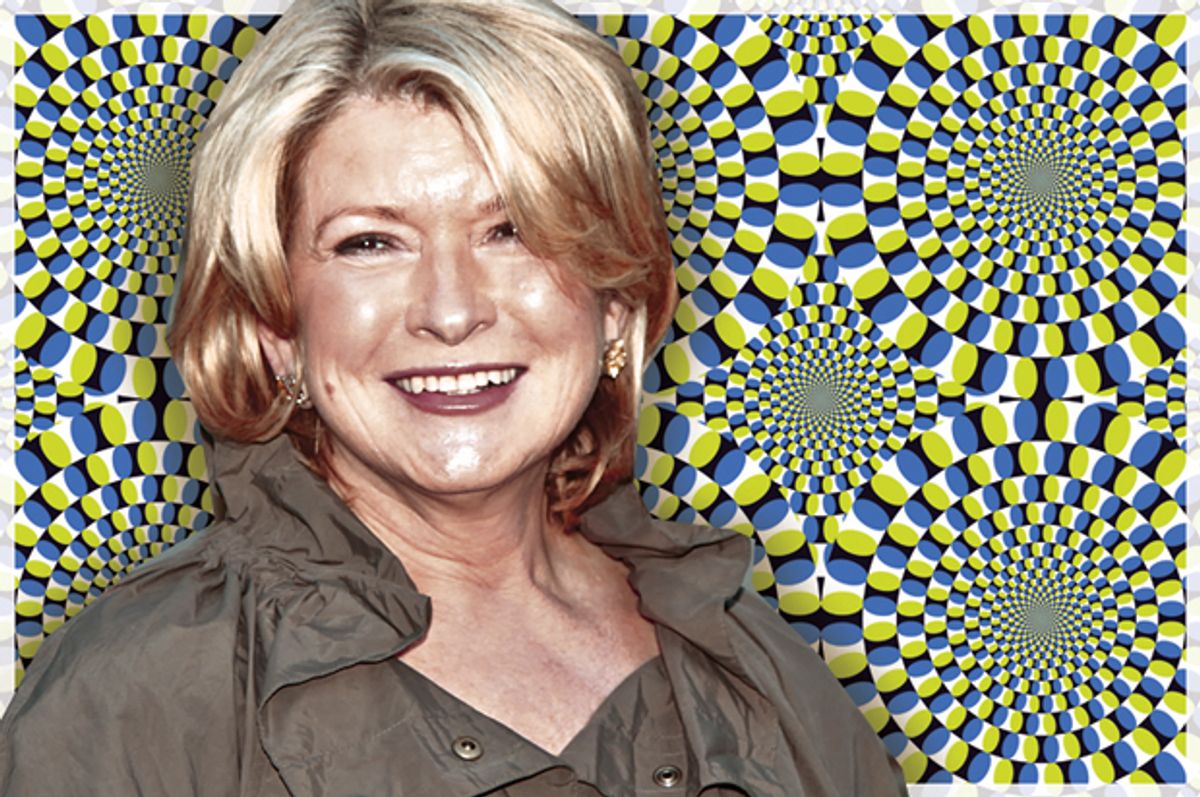 In Jen Lancaster’s new book, “The Tao of Martha,” Lancaster, a memoirist, details the year she spent living like Martha Stewart. She made Martha’s toffee recipe (a disaster), attempted her mac and cheese (delicious) and hollowed out Easter eggs for an Easter egg hunt (much harder than it looks). She cleaned out drawers filled with Kleenex and old batteries to make way for organizational compartments and paper clips. “Although I could never out Martha Martha,” Lancaster writes. “I could certainly emulate her.”

Lancaster is not alone in her quest to follow the dictums of Martha. In fact, there is a veritable cottage industry of Martha Stewart-inspired bloggers, Facebook pages and Pinterest boards around the Web. A blog titled Life as a Martha Wannabe boasts an elaborate guide to floral “tablescapes.” There’s a pumpkin découpage guide inspired by Martha and a boggling quantity of homemade fudge recipes. One blogger posted the cover of “Martha Stewart Weddings” alongside photos of her own wedding place cards, and wrote: “My home screen on my internet browser is marthastewartweddings.com. What can I say I’m crazy!”

And then there’s the vast Pinterest page “Martha Stewart Wannabe,” where you can find a cornucopia of Martha-inspired DIY riches. Homemade corn dogs. Tin can lanterns. Crockpot soap. Spicy strawberry rhubarb salsa. A pastel rug made out of kitchen rags. And of course, a few glowing photos of the beneficent goddess herself, posing in her “craft studio” or daintily brandishing some Windex next to a glistening French door. A hangdog banner at the top of the page proclaims: “I’m no Martha Stewart and I try hard to be organized. LOL. It’s a hard thing to do.”

You might think that Martha Stewart would kvell at all these Internet imitators. And yet she has been oddly prickly about the Web. “Who are these bloggers?” she said in an interview with Bloomberg. “I mean, there are bloggers writing recipes that aren’t tested, that aren’t necessarily very good, or are copies of everything that really good editors have created and done. So bloggers create kind of a popularity, but they are not the experts.”

Martha was probably arguing for her own supremacy and place in the canon, but she ended up offending her most adoring fans. The inevitable backlash from bloggers was brief but fierce. There was a piece called “Martha Stewart Likes Bloggers. I Have Proof,” in which a blogger called “Design Mom” enumerated the ways the Martha Stewart organization had supported bloggers all the way along, giving them craft supplies and promoting them on various Martha Stewart "media properties.” Eventually everyone went back to imitating Martha explicitly and implicitly. But Martha’s comments are especially ironic considering that one could argue the entire rise of domestic blogging is inextricably linked to the rise of Martha herself.

Today, Martha’s visual signature is all over the most popular home blogs on the Internet. The distressed wooden tables, sculptural food photography and earthenware bowls she made famous have become synonymous with the visual language of Pinterest boards and cooking blogs around America.

Indeed, it wasn’t really until the dawn of the Internet that Martha really got the praise she deserved. Throughout her career, Martha was dogged with condescending and lightly insulting press coverage. In 1987, when she released her seminal book “Weddings,” the New York Times snickered at her “perfect … herbed potpourri” and puzzlingly added, “Judging from the book, the days of the barefoot wedding on the mountaintop are over.” (When did they happen?)

The New Republic called her a “striving good girl still cut to the quick by her classmates’ razzing when she asked for extra homework.” In 1995, the Times upped its insult game -- referring to her as “a control-freakish middlebrow taste maker.” There was even a series of parody books about Martha in the ’90s. “Is Martha Stewart Living?” and “Martha Stewart Is Better Than You at Entertaining.” In the latter, Martha has a contest with the pope to turn water into wine and ties up a man with a rope during a dinner date.

At the time, Martha whipped up baby boomers into heights of competitive fervor. Women seemed to view her as a direct threat to their own domestic ascendancy, or lack thereof. Writer Patricia McLaughlin put it this way: “If you were socialized to be Suzy Homemaker, as most older boomer women were, and ended up being a lawyer, somebody’s trousseau -- or Martha Stewart telling you how to rag your bathroom walls -- reminds you of the road not taken … And hating Martha Stewart is safer than hating your whole life.”

But with her insider trading case (suddenly Martha wasn’t so unattainably ideal anymore. She went to prison! And in said prison, she made a poncho!), her public image seemed to soften. And then came the Internet. Finally, domestic accomplishments, like sewing and crafting and cooking, were given a public place to thrive.

So Martha was reconceptualized as an icon of domesticity, not as object of derision. She emerged a benevolent aunt, the one who started it all, the William Shakespeare of “Entertaining.” Her household prowess even began to seem somehow more human and attainable now that she was notoriously bad at social media — she has been known to tweet earnest photos of food so unappetizing that they inspire replies to the tune of “That looks like a dog’s breakfast” and “Jesus Christ Martha.”

And thus the world of online Martha obsessives was born. If pre-prison Martha inspired women to reverently attempt her domestic feats alone in their kitchens, her fall from grace seems to have emboldened a slew of Martha pretenders to remake themselves in her image. But these wannabes have a specific commonality: Each description of a Martha Stewart project is qualified with some sort of avowal that the blogger isn’t actually Martha Stewart.

What is it about women with a knack for home decor and a taste for the twee that makes us at once hate them and aspire to be them? How old will Gwyneth Paltrow have to get and how much suffering will she have to endure before we like her? You rarely hear a man say something like, “Now I’m no George Clooney, but I will insist on marrying an accomplished lawyer!” And yet Martha, by virtue of her very imitability, somehow encourages us to twist ourselves into knots of aspirational inadequacy. Why is it that when we see an “ideal” it immediately and unquestionably invokes a personal comparison-- as if its very existence questions our own? Lancaster’s memoir, at least, is self-aware about the whole dubious project of Martha-worship. “I realize Martha isn’t everyone’s icon, but she is mine,” she says. Her words could be the rallying cry of this whole teeming subculture: “I love her because instead of lording her superior skills over everyone and making them feel bad about themselves, she’s out there breaking it down — for even the least talented among us.”