For some key purchases -- like mattresses and plumbing fixtures -- going cheap is never a good idea. 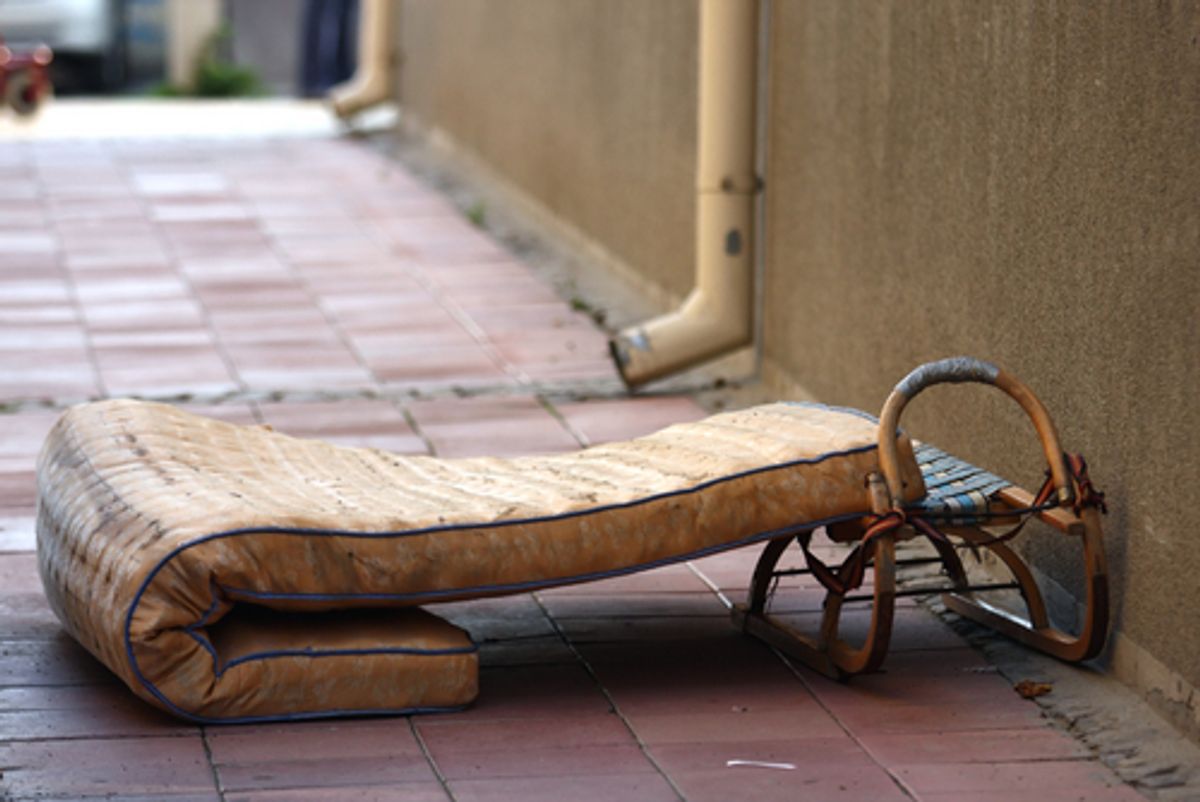 We’re a nation of consumers and bargain hunting and scrimping are part of our way of life. However, there have always been products out there that we’ve collectively known we shouldn’t be frugal with.

Eyewear has historically been something people know not to go cheap on, unless they want to buy new frames frequently. But times have changed. Online shops like Glasses USA and Warby Parker have made it possible to get deeply discounted glasses without giving up much in terms of quality.

In recent years we’ve seen the advent of sustainable consumerism, buying used and refurbished products instead of new ones, not only to save money, but to keep still usable items out of our landfills. Internet sites — Craigslist and eBay in this case — have helped spawn this movement. It’s getting more common to see people buy everything from designer blue jeans to bicycles used, and at steep discounts over new.

But there are still many items you really shouldn’t scrimp on. For some items, like tailored suits and cutlery, you probably shouldn’t go the cheap route, but we have seen exceptions to the rule. But for the items below, we can’t think of one reason to go cheap.

A cheap stainless steel sink may have a higher gauge (which is thinner), which means it is more likely to bow, bend and even fail. Also, a thin sink doesn’t hold heat well, so a sink full of hot dishwater can turn cold quickly.

A bigger problem is fixtures such as faucets and showerbodies, which can come in a range of quality, even from the same manufacturer. Oftentimes, the products at big box stores contain critical parts made from plastic, instead of metal. Valves, once made of brass or steel, have been widely replaced by cartridge housings made mostly of polypropylene and rubber components.

Most plumbing manufacturers still make better quality versions of the fixtures you’ll see at hardware stores that have more durable parts and sometimes more features. You might have a hard time finding them at big box stores, because they’re typically sold in lower volumes at plumbing supply stores. Depending on the type of fixture, expect to pay 40-80% more for the high-end version of what you’d find at Home Depot or Lowes.

2. Mattresses. Few things are as vital to your health as a good night’s rest, which makes buying a quality mattress very important. And if you often find yourself waking up tired and with body aches, it’s probably time to start looking for a new one. A good rule of thumb is to buy a new mattress every 12-15 years, regardless of how restful your sleep is.

For many people, shopping for a mattress is a bewildering process. There are many different types of mattresses, such as innerspring, water, foam, memory foam, pillow-top, air, and gel. And then there are hybrid variations of these as well. On top of that, there are mattresses that work with articulating bases, that heat and cool, and that have adjustable firmness settings. Confusing?

Purchasing a mattress is perplexing, in large part, because the industry wants it that way. It’s hard to comparison shop when the options are so varied. Manufacturers make it even more confusing by creating different (but very similar) lines for different distributors, and at different price points. This practice allows them to slip in some less-than-well-made mattresses along with their higher-end fare. However, you’re still better off looking at the more expensive mattresses first, and considering less expensive brands only if they can match the comfort, quality and utility of a higher-end mattress. There’s nothing wrong with going home with a $500 mattress instead of a $4,000 one, just make sure you’re not conceding anything when you make your decision.

When shopping, consider your (and your partner’s) sleep positions and comfort. When you’ve narrowed down your list of mattresses to just a few, spend at least 15 minutes relaxing on floor samples to see which you prefer. Try out all those sleep positions.

While we recommend you consider the higher-end mattresses first, it doesn’t mean you have to pay full price. Department and mattress stores often have storewide sales, where all stock is discounted. As a rule, the biggest sales take place around Memorial Day and between Black Friday and Cyber Monday. Savings can be 40-60% on name brands.

In case you don’t like your new bed, make sure you can return the mattress in the first few months after you buy it. If the store has such a policy and takes back the mattress, you may still have to pay a restocking fee.

3. Computer memory.If your computer starts to get sluggish or you start hearing a rhythmic whir from the hard drive, your computer would likely benefit from an increase in RAM (or random access memory). Upgrading RAM is the most inexpensive way to bolster performance, and it’s typically very easy even for novices to install, especially on desktops.

For a typical computer upgrade, a cheap 8 gigabyte RAM upgrade from a no-name manufacturer might cost as little as $11, but the name-brand upgrade from a company like Kingston or Crucial could cost six times as much.

Beyond price, all RAM is not created equal. Even if it says it meets your computer’s specifications, it might not be compatible after all. For the most part, if you settle on cheap RAM, compatibility can be a crap shoot. While it’s sometimes immediately clear that the new RAM isn’t working out with a simple diagnostic test, some compatibility issues might not crop up for weeks or even months. It’s those surprises — like when your computer locks up after you’ve worked on a document for hours and forgot to save it — that tend to cause the most heartbreak.

We suggest buying from well-known RAM manufacturers and distributors, or you may also want to consider buying from the same manufacturer that created your computer’s existing RAM.

While we recommend you not go cheap, beware of newer and faster RAM technologies. Even if they claim to offer better performance, they might not work well with your computer’s motherboard. Check your computer manual to find out what type of RAM modules you need and how they have to be installed.

4. Tires. Next to your car’s brakes and restraint system, the tires are probably its most critical safety component. So there is no good reason to shod your car with cheap off-brand rubber.

When choosing a tire, you’ll want to start by looking for tires that do well in braking, hydroplaning and handling tests. Tire Rack, an online tire retailer, tests all the tires it sells at its test track (and not all get glowing reviews), so you may want to see what its engineers have to say. Once you’ve identified tires that do well in these safety tests, consider other factors like tread wear, comfort, and noise. Also, you may want to check out a tire's “rolling resistance,” which is the amount of friction the tire puts on the road under power. Tires with low rolling resistance typically help your car’s fuel economy, and the lower friction while cruising doesn’t always translate into longer braking distances.

For a typical economy sedan, cheap replacement tires can be had for as little as $30 each, while high-end, top-rated brands might sell a similar tire for $125. But take our price quotes on tires loosely. Tire prices can vary widely depending on the region or the retailer. To get a ballpark idea on what you’re likely to spend, check the prices from national online retailers before buying tires from a local store. A good set of all-season tires shouldn't be that expensive anyway. If you shop around, you can find a set for under $400 for your typical sedan, but that figure could be much higher for some luxury brands and sportier cars.

It may also be appealing for some to buy used tires to save money, or they may think reuse might be environmentally friendly. However, this is not a very good idea. To start, you don’t know how these tires were maintained or how the car they were mounted on was driven. They may have been under- or over-inflated, driven way too hard, or may have been overloaded with weight, all of which can affect their integrity. Also, the rubber compounds in tires degrades over time, so a tire that’s more than five or six years of age might be structurally compromised. Since tires have such a big impact on your car’s safety, we don’t think it’s worth taking such a big risk to save a bit of money.

5. Paint.In recent years, reformulations of interior and exterior paints have caused prices to rise notably, making scrimping on them rather tempting. But as any home-improvement contractor will tell you, with paint you get what you pay for. Cheaper paints are, as a rule, lower in quality. High-end paints tend to last longer than the less expensive brands, meaning that the savings you see at purchase won’t last, as you’ll probably need to paint more often.

There is a bit of controversy among consumer product testing companies and paint contractors in regard to paint. In past tests, Consumer Reports has rated some mid-priced store brands over high-end brands, much to the dismay of many home-improvement contractors who insist that the less-expensive paints don’t hold up. Despite the controversy, the premium paints preferred by contractors, like Benjamin Moore and Sherwin Williams, also do very well in the magazine’s tests.

When buying paint, look for brands that have lower levels of volatile organic compounds, or VOC. The short-term risks of paint fumes are headaches, dizziness, nausea, asthma exacerbation, fatigue, skin allergies, confusion, and memory impairment. Low-VOC and zero-VOC paints may not be better in quality than standard interior and exterior paints, but they do tend to dry much more quickly and they're far better for you and for the environment.