There's nothing left to argue: No fact or tragedy will change any minds -- but here's what will

So many shootings, so many deaths. So much anger. Gun politics only get worse, but change really is coming 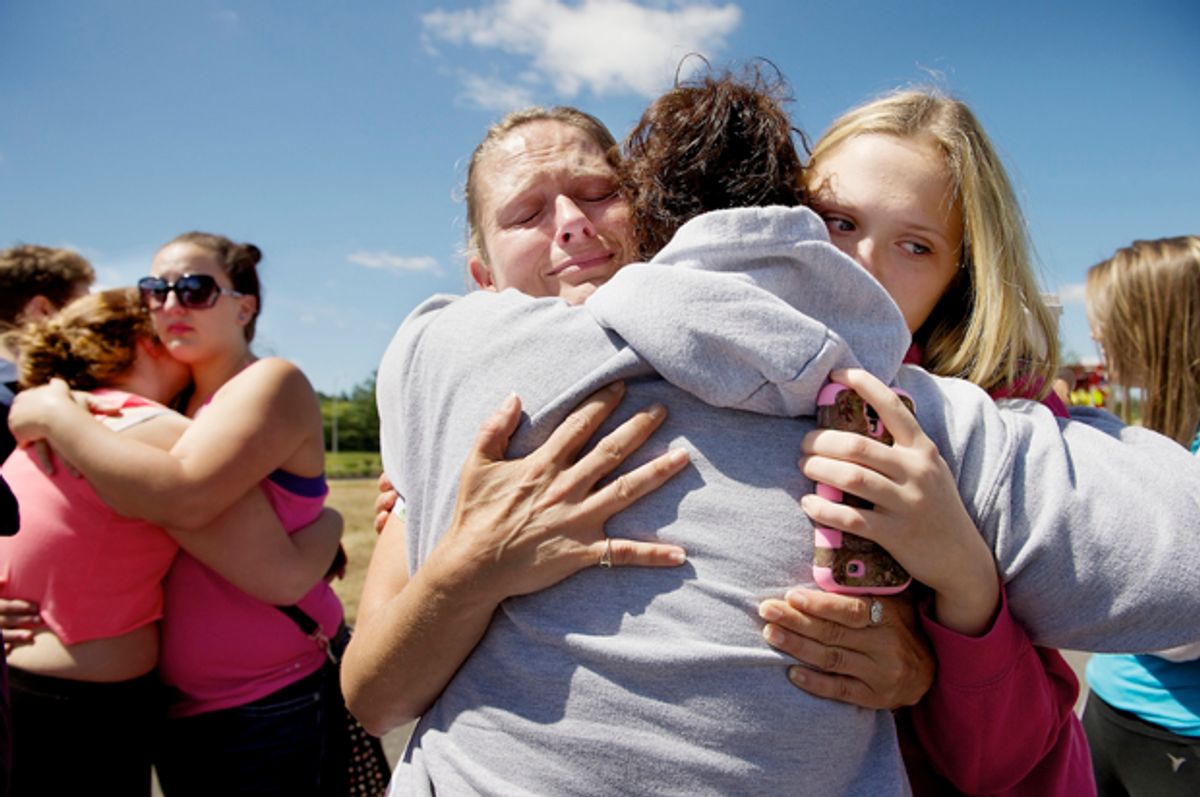 Brandi Wilson, left, and her daughter Trisha, right, embrace Trish Hall, a mother waiting for her student in Wood Village, Ore., after a shooting at Reynolds High School, June 10, 2014, in nearby Troutdale. (AP/Troy Wayrynen)
--

To the people of Troutdale, Oregon, I am so very sorry about what happened. I was at lunch when my fellow journalists started looking at their phones, shaking their heads.

By one reckoning, this is the 74th school shooting since the December 2012 murders in Newtown, Connecticut.

There are so many school shootings that their numbers have started to resemble what the USDA calls “Food Defect Action Levels,” which establish how many insect fragments and larvae and rodent hairs can be in a can of peaches before anyone is required to do anything about it. There actually is an official “acceptable” amount of rodent feces for a bag of corn meal or cocoa powder, and it’s starting to feel like there’s some number of school shooting deaths per month that our society finds tolerable.

Which is crazy. I know that.

I live in Connecticut, which seemed for most of my life like a very safe (and slightly boring) place. But we began the decade with nine dead in a mass shooting at a beer distributorship east of Hartford. And then came Newtown.

One thing you will learn is that people keep building towers of statistics to show that this kind of thing is getting worse. Or that it isn’t. And there are Aquinian debates about what is meant by “this kind of thing.” What is a mass shooting? (Usually at least four dead, not counting the shooter, with “no cooling-off period” between deaths.)

What is a school shooting? (Very complicated. The group that came up with that 74 number counts all schools, including colleges, and counts suicides and accidental shootings. Some would say that’s pretty expansive; on the other hand, it doesn’t count Isla Vista, which was technically off-campus.)

So in Troutdale, you will hear that this was a school shooting but not a mass shooting. You will hear it represents a failure to restrict access to firearms and that it’s the kind of thing that didn’t happen back when more people carried guns. You will hear that gun laws are a wild goose chase and that all the focus should be on improving the broken mental health system. (Most of the people who will say this to you would not cross the street to testify on behalf of increased funding for psychiatric services but would drive 100 miles to rally against new gun laws.)

If you advocate stronger gun laws, you will be told that your opinions are worthless if you seem to be confusing a magazine with a clip, if you have not fired guns yourself, if you do not know the names and attributes of many different guns. If you advocate gun rights, you will be told that you place your hobby above the lives of the innocent dead.

I’m as guilty as anyone else. Recently a gun rights guy – nice, reasonable guy – asked me to join him at his gun range, so he could teach me more about firearms, so I could see why I was wrong to listen to a proponent of “smart gun” technology (which makes it harder to fire a gun if you’re not its owner). I told him I’d come if I could bring along the widow or mother of a gun suicide, so she could get this fine lesson, too

He correctly interpreted that as a somewhat hostile response.

If you are as unlucky as we in Connecticut are, you will meet a whole group of people – more than you can believe could ever exist – who insist that your shooting never happened, that you made it up as a “false flag” to justify more restrictions. Or that it “makes sense” to air out this charge and “ask all the questions.”

It’s the most hellish argument in America, a conversational inferno hotter and more putrid than the abortion debate or gay marriage or anything else I can think of. I have been a journalist since 1976. I’ve had a newspaper column since 1982. I was a commercial radio talk show host for 16 years before I came to public radio. Believe me, I know from crazy and horrible.

I had a commenter on my column thread who showed a gun where his little Facebook picture would be. A woman commenter asked him: What’s up with the gun picture? He said he would enlarge her picture and bring it to the gun range, blow a hole through her face and mail it to her.

He wasn’t even the worst, but he stood out somehow.

So don’t get into arguments. The ratio of energy-expended to minds-changed is essentially 1 quillion-to-0. Don’t imagine that facts matter. Daniel Patrick Moynihan notwithstanding, each side does feel entitled to its own facts.

Don’t expect change. The Newtown moms and dads went to Washington and looked right into the eyes of members of Congress. Guess which the Senate decided was a bigger problem: a) inadequate requirements for background checks or b) unhappy people making contact with them?

Do expect change. All by itself, as the result of absolutely no legislation, gun ownership has been decreasing for many years. That is, the percentage of households owning any gun keeps going down. Meanwhile, the number of firearms owned by gun-owning households keeps going up. So the trend is either to have nothing or an arsenal.

Do expect personal change. I used to support better gun laws. Now I think they just ratchet up stockpiling and paranoia. Now I believe the change must come and will come organically (see above) as more people come to their senses.

Like most journalists in this state I’ve lived with the idea of those dead kids until it rewired me. When the bombs went off in Boston, my hands shook, and I wondered if I could go on the air. At the gym, I know exactly how I would get from my exercise bike to an exit door if a shooter showed up.

I’m so sorry for Troutdale and all the other towns, because it’s not insect eggs in your cinnamon. It’s blood and tears and lives erased.

But here is something to cling to.

Last December, a year after the shootings, police were warned that a man was approaching the University of New Haven campus with some kind of guns. They locked down the campus and caught the guy. He had two loaded Glocks. In his car was a Bushmaster, the gun used at Newtown. At his home, in a padlocked bedroom, were 2,700 rounds and clippings about the Aurora, Colorado, shooting.

So that was scary. But everybody who responded did the right thing. Here in Connecticut, the threat hasn’t gone away, but our ability to spot it is getting better.

You know who called in the first report? A homeless woman using a pay phone.

When the university realized that, a fund for her was started.

You take your hope where you can find it.