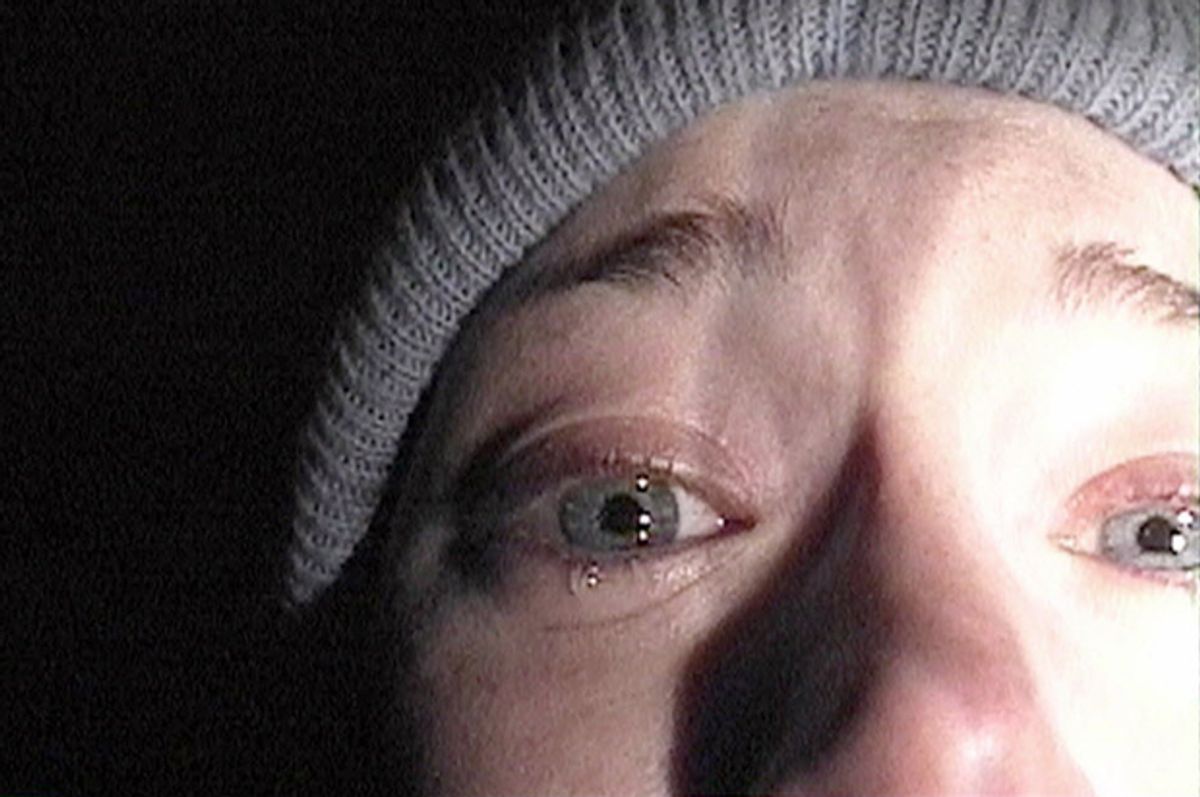 The first time I watched "The Blair Witch Project," I saw it exactly as one should – and few have been lucky enough to. It was the late spring of 1999, and all I knew about it was that it had been a surprise sensation at Sundance that year, was the current subject of a clever, utterly original online campaign and that, as the friend who had given me a bootleg copy assured, it would mess with my head. Alone in my apartment, I turned  the lights off and popped the cassette into my old VHS machine. There are a few things I remember about that night: the haunting shock of the final scene, how I repeatedly had to remind myself -- as a newly pregnant first-time mother to be -- to stop holding my breath, and how aware I was that I was watching something that was going to be a sensation before it was a sensation. I got another clue a few weeks later after I attended a press screening, and I observed the audience stagger out, too stunned to yet speak. They were also, admittedly, likely a little nauseated, a side effect easily chalked up to the film's shaky camera work but soon fancifully reported as vomit-level scares.

It's been 15 years now since Heather, Mike and Josh disappeared into the woods  -- 20 if you go by the film's fictional timeline. And though the filmmakers and stars of "The Blair Witch Project" did not go on to great stardom, the film itself did indelibly change the way we look at movies – and remains one of the most unique summer blockbusters of all time. What made it different? Start with concept itself, a dark twist on the then still burgeoning reality television genre. A full year before "Survivor" but well  into the "Real World" generation,  it told the tale of a group of bickering, competitive young people, unfolding in a manner that felt unnervingly spontaneous.

The fiction-masquerading-as-reality-TV genre wasn't invented with "Blair Witch," of course. Orson Wells created a minor panic in 1938 when he presented "The War of the Worlds" as a news broadcast of an alien invasion. Twenty years before "Blair Witch," one of the most notorious exploitation films of all time, "Cannibal Holocaust,"  featured a similarly doomed group of cocky young filmmakers and footage so recklessly bad it seemed convincing. (It also, infamously, contained real scenes of animal cruelty.) The 1992 cult Belgian hit "Man Bites Dog" likewise mixed documentary style and sardonic narrative. And just a year before "Blair Witch," a different kind of found footage classic, the original Japanese version of "The Ring," appeared. But after the success of "Blair Witch," the genre exploded, spawning low budget successes like "Paranormal Activity" (and its diminishing returns series of sequels) and "REC," big-budget action flicks like "Cloverfield," and twisty, unsettling, "What's real and what isn't?" dramas like "Catfish."

Now, it's hard to watch anything that purports to be authentic without a skeptical "What's this really a publicity stunt for?" -- but back then, disbelief was easier to suspend. For years after its release, I was still getting emails from viewers asking whether the story of the Blair Witch disappearances was real. An Albany police officer reportedly offered to help in the investigation. It was that convincing, thanks in no small part to writer-directors Daniel Myrick and Eduardo Sánchez's unnerving technique for keeping their cast on their toes -- sending them out camping and giving them only minimal information on what was going to happen to them throughout the shoot.

Then there was the truly ingenious-for-its-time publicity campaign -- which hinged largely on a low-tech-looking Web page rich in drably real-looking "evidence," including photographs and interviews. You can call it amateurish  and obvious now, but in those waning moments before smartphones and YouTube and hashtag-driven media campaigns, it was convincingly creepy. Then, just to ramp up what was rapidly becoming the most buzzed about indie of the year, right before the film's official release, the Sci-Fi network aired a straight-faced "documentary" offering the back story of the witch legend. It was the most elaborate, innovative bit of funhouse fakery of its kind. By the time the movie actually opened, it had already become a viral hit before the phrase "viral hit" was a thing, and was well on the way to becoming one of the most profitable films of all time.

As the lines around the movie theaters grew longer that summer of '99, the expectations of what the movie could deliver grew more impossible to achieve. By fall, the disappointment of audience members who had not been outright killed dead by fright had created a minor backlash. Or, as I remember a friend dryly observing at the time, "Yeah, it was so terrifying when they found that PILE OF STICKS." The film was parodied relentlessly, with Heather's runny nose becoming the late '90s equivalent of "Jaws'" ominous fin. The fright had officially subsided.

I recently watched "Blair Witch" again and, no, it did not fill with me with fresh Y2K-era dread. But it is still spooky and sad, a story of youthful cockiness gone horribly wrong. And in truth, the older I get and the further away from that particular kind of dumb bravado I am, the more poignant that becomes. The final scene, however, still found me reminding myself to breathe. Mostly, however, watching it made me marvel at how leisurely its pace is, and how the hell a film in which so little really happens could ever have become such a massive hit. If it were made today, it'd be a gif – a Vine at most. It remains a product of a very specific cultural moment, a movie that blazed a trail of how to do a lot with very little and how to tap the power of the Internet to scare its collective pants off. There will never be anything quite like it ever again. Instead it will stay, like those three kids in the woods, fixed forever in a particular place, an old-fashioned campfire ghost story that ushered in the 21st century of movie storytelling.