Lame jokes, incurious interviews -- why were we excited about this guy? 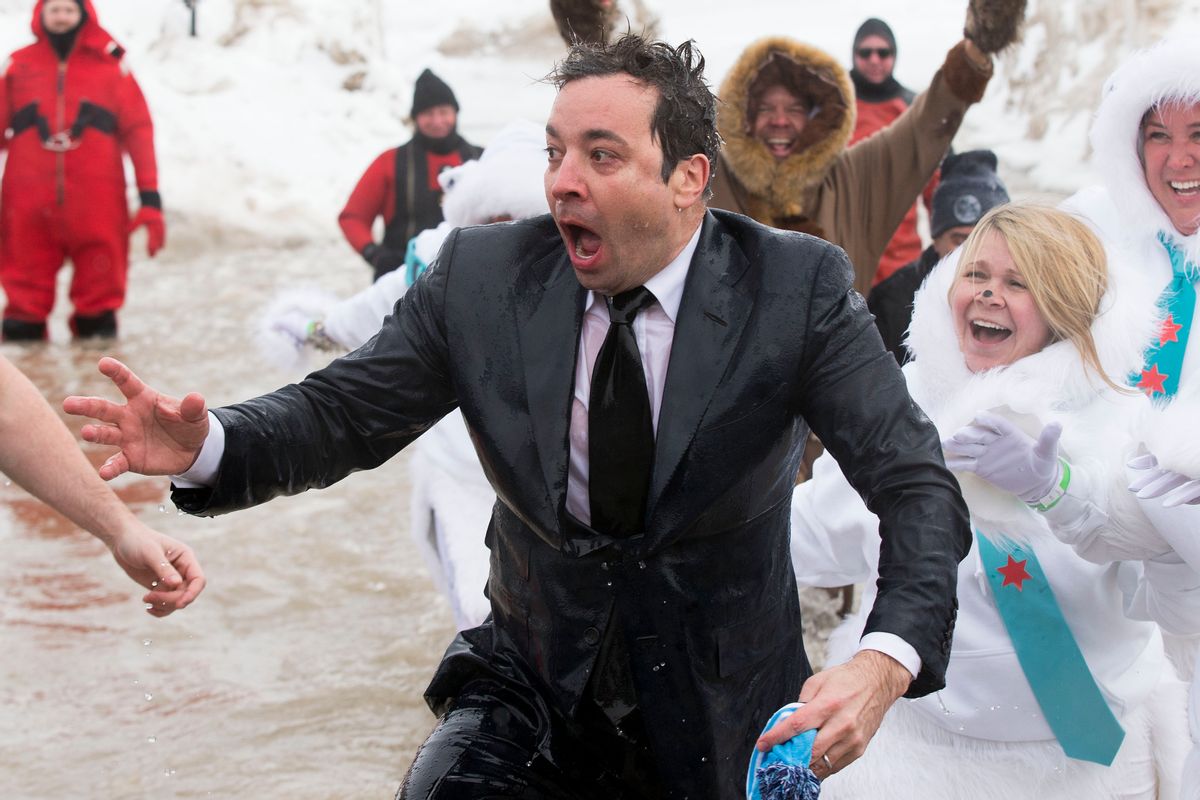 Who knew Jimmy Fallon was Jay Leno in disguise?

The current host of NBC's "Tonight Show" and the one who came before would seem to have little in common; Fallon's a young (though not as young as he thinks he is) comic who leans, hard, on musical numbers, while Leno was more fond of dopey franchises like man-on-the-street interviews and goofy headlines in newspapers. It was widely perceived, at the time of Fallon's appointment to the gig, that he'd bring a fresh perspective to the fairly moribund Leno "Tonight Show."

And yet, several months into Fallon's tenure on "Tonight," it's become clear that the show serves the same function it always has, and that Fallon is the show's perfect host. It's a P.R. machine for anything and everything, with no point of view but that entertainment is sure entertaining!

Fallon's interview and dance skit, last night, with New Jersey Gov. Chris Christie prove just how good Fallon is for the job. What's most attention-grabbing was the "Evolution of Dad Dancing," in which Fallon and Christie, both dressed in unflattering "dad-like" pleated khakis (and both, in real life, fathers), did dances including "the 'don't make me turn this car around'" and "the 'We won the game!'" The skit ended with Fallon doing a dance move described on-screen as "the 'This bridge is closed!'" and Christie walking off in evident annoyance. Ha, ha, ha! Leno, too, provided a safe space for awful politicians to launder their reputations, but it never seemed quite so transparent.

The scandal generally attached to Chris Christie melted away on "Tonight"; no one's asking the show to become "Meet the Press," but Fallon treated Christie with kid gloves. "No one's asking you to say what happened, but boy, did you get hit in the press," Fallon declared. The host went on to apologize to Christie for making fun of him and declared his "respect to you for standing in the ring and getting hit like that, and looking -- just focused on what you have to focus on. You look great, and it just speaks volumes of you. Good for you for standing in the ring."

This word-salad -- to what ring is Fallon referring, exactly, and is there a question here, or just praise? -- is emblematic of Fallon's hosting style, whereby it's not just that showing up is everything, it's the only thing. To do more than the minimum, like to ask a real question of Christie or allude to the closure of the George Washington Bridge in a manner that betrayed familiarity with the case or even to make a joke more meaningful than a weight joke, is to risk alienating someone.

Fallon is as tongue-tied around around Democratic politicians as Republicans, or, for that matter, as he is around movie stars. A recent New York magazine piece following the "Divergent" actress Shailene Woodley revealed that Fallon's team edited out Woodley critiquing the way Hollywood pits women against one another. He'd asked what Woodley thought of being compared to Jennifer Lawrence, another well-liked franchise actress, and he didn't get an uncomplicated, sunny answer.

In theory, "The Tonight Show" is one of the most important entertainment franchises in America, a way for a personable host and his rotating set of guests to speak to all of America -- so the lack of point-of-view makes sense. This may be a little overstated, but not much; Jay Leno's death grip on the host's chair and Conan O'Brien's doomed attempt to succeed him revealed just how seriously entertainers take the show as a big and broad platform, fundamentally different from "Late Night," the show that airs after it, or from CBS's late-night franchise, "The Late Show," whose host, David Letterman, is widely seen as a tragic figure for never having been able to get "Tonight."

If ever there was, there's really nothing underpinning the "Tonight Show" mythos, in 2014, other than NBC executives' sense of their own worth and the memories of Johnny Carson -- who had the advantage of no meaningful competition. Fallon has no real reason, other than congenital inability, to steer so wildly clear of anything that might provoke more than a click. The host, famously, never caught on as a movie star after providing the eager, enthusiastic counterpoint to the more acerbic Tina Fey on "Saturday Night Live's" "Weekend Update." Fallon's reputation for breaking character on "Saturday Night Live" was well-earned -- he was, then as now, more interested in signaling that he was having fun than in sharing the experience with the audience.

To be a movie star, one needs substance. To be the new Leno, all one needs to do is mirror back what one thinks the audience wants. In a new interview, Lorne Michaels says he told Fallon that "there really is no job after this." Lucky Fallon -- he's got a gig for 30 years if he wants it, and in just about the only field of entertainment that rewards total lack of curiosity.