We may love to hate Gwyneth, but the celebrity interview is the only way motherhood makes its way into glossy mags 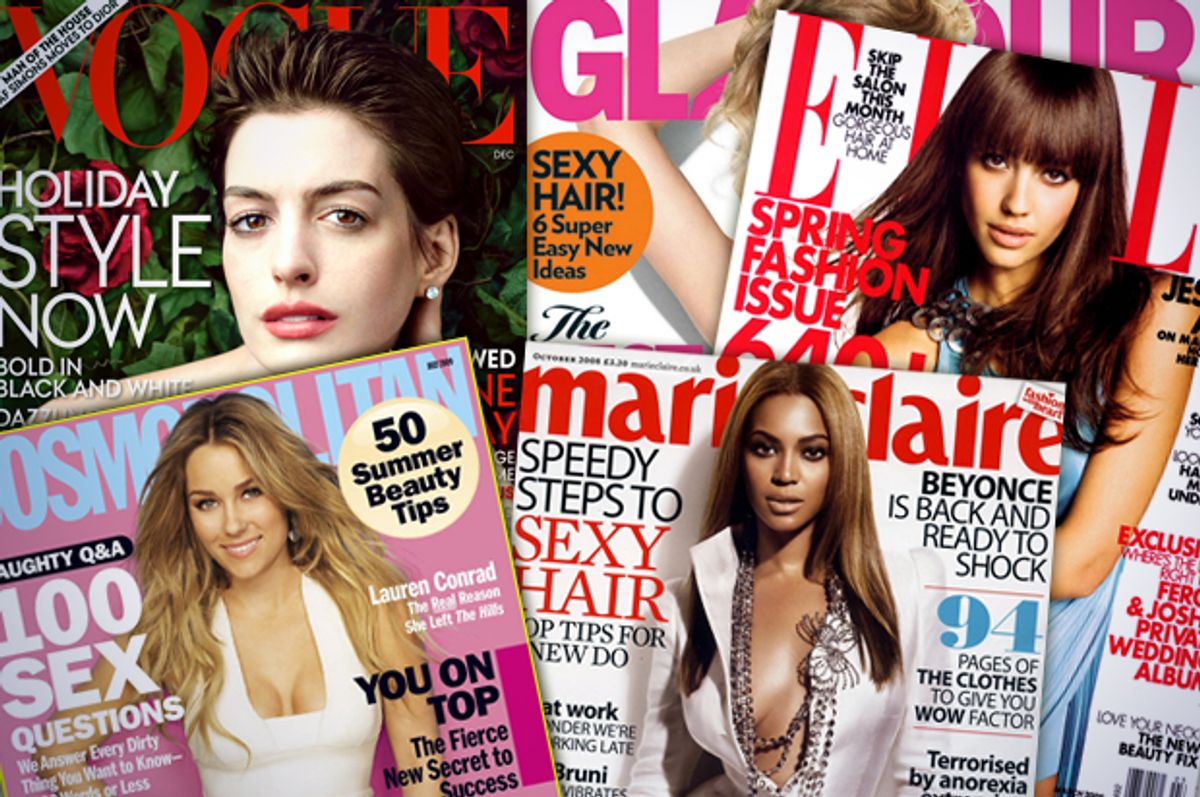 Like most women, I’ve long had an antagonistic relationship with women's magazines. I resent the ways they have made aspirational a reasonable and socially acceptable lifestyle, and how articles about eating disorders and self-acceptance appear alongside image after image of impossible-to-replicate bodies and clothes.

Still, I have found pleasure, and even occasionally some relief, stepping inside those imaginary palaces and roaming around. Once inside, I quickly ease into a state in which their problems are my problems, their solutions, my solutions, and I come to believe that transitioning from boho to minimalism is, without a doubt, the right move for right now. It’s an exercise in adult make-believe, a chance to indulge fantasies and explore possibilities that I am either too feminist, ashamed or cash-poor to approach in real life. And I like it.

Well, I did, until I became a mom.

Now I have found myself, for the first time in my life, a women’s magazine orphan. I am no longer fabulous enough, career-wise, fashion-wise, or really anything-wise, for titles like Elle, Marie Claire and Vogue, and I am not domestic enough or focused on my inner self enough for magazines like Real Simple and Oprah. Oh, and I am definitely not parent enough for Parenting.

Before I became a mom, I was blind to the sharp division in the world of glossy magazines between those that acknowledged parenthood and those that didn’t. This division doesn’t just represent editorial content, but two distinct modes of femininity in our culture at-large in which parenthood is the distinguishing element. No wonder motherhood is all too often an exercise in social and psychological schizophrenia for the newly initiated.

“Our culture still takes motherhood as a starting point for your female identity,” said Elizabeth Podnieks, a professor of English who’s written about mothers in popular culture, when I asked her about this chasm. “You either are a mother or you are not a mother. We are still seeing women in these opposing terms because the only way to do both is be superwoman, but we can’t be superwoman, so we have the divide.”

On one side of the shelf we have Elle, Vogue, Marie Claire and Harper’s Bazaar, gatekeepers of all that is powerful, ambitious, sophisticated and glamorous. There is no room for motherhood in this narrative, as it would most certainly get in the way of all the spike heels and sex. Cosmopolitan and Glamour tend to skew younger, so no motherhood either, though plenty about the act that gets you there, along with an increasing amount of coverage of reproductive rights.

And then there are the many titles that do embrace motherhood, but always within the context of the domestic sphere. The “Seven Sisters” magazines, titles like Women’s Day and Good Housekeeping, take a more old-fashioned approach, with tips on packing school lunches, craft ideas for rainy days, and spicing up your sex life with your husband, alongside fashion and work advice. Real Simple acknowledges parenthood, beside tips on the best uses for jam jars, the best way to cook English peas, and other domestic life-hacks. O, the Oprah Magazine embraces motherhood too, but relies heavily on a self-improvement narrative rather than a full-frontal examination of the complexities and indignities of being a mother today. More magazine stands out as doing a decent job of weaving together a contemporary woman’s many selves, but it’s geared more toward the post-menopausal crowd than new mothers like me.

So what do I want? A magazine that explores the unyielding impact that having a child has on my life, including the way I work, dress and have sex, but does this outside the context of the home. I want a glossy that acknowledges that women’s lives are not divided into neat categories of before and after kids, and that being a mother is not an all-encompassing identity. I want to read profiles of female leaders and artists and book reviews and the latest anti-aging advances while also reading essays about motherhood and reporting on the maternal wall. A few fashion tips for mothers who still want to be in the game wouldn’t hurt either. (Julia Restoin Roitfeld, daughter of former French Vogue editor Carine Roitfeld, appears to feel the same. Last year she started a blog devoted to helping women look fashionable during and after pregnancy.)

Now there is one exception, a way in which motherhood finds its way into the fabulous magazines without getting in the way of the spike heels: the celebrity interview. Drew. Shakira. Gwyneth. They’ve all shared stories about parenthood in fashionable glossies, telling anecdotes about strollers, weight gain and maternal ambiguity. Podnieks says that there is a good reason for this.

“Celebrities are the perfect vehicle because they are working women, but also very much shaped by feminist stereotypes,” she explained. Drawing from the work of Susan Douglas and Meredith Michaels and their book “The Mommy Myth: The Idealization of Motherhood and How It Has Undermined All Women,” she explained that unlike the rest of us, celebrities can achieve superwomen status, they can look great and work hard and be good moms who cook excellent chicken. Of course, the large network of people they rely upon to achieve such feats are often scrubbed from their public image and all we are all left with are “poster figures for this post-feminist ideology, a perfect antidote to the masculinized working women” that are so commonplace.

In the past, women’s magazines used to offer up a diverse array of voices and perspectives, says Amy Aronson, a professor of media studies whose research focuses on the history of these magazines.

“It was a genre that began with multiple discourses about women, intersecting discourses, with contributors and staff-writers all mixing it up in a noisy environment. Eventually, because of commercial pressure, the modern magazine has evolved to a more niche separate of voices.” A more targeted audience is more appealing to advertisers.

Even as late as the '70s, there was a larger variety of ideas in women’s magazines;  Betty Friedan’s “The Feminine Mystique” was excerpted in McCall’s and Ladies’ Home Journal. But eventually second-wave feminism, inspired largely by Friedan’s words, fought hard to distance women from all things domestic, motherhood included. At the time this was an important, even vital step in breaking the historic chains linking women to the home and family, and there is no question that women gained from this.

Now we find ourselves stuck in that aftermath. We know what a fabulous, cultured, powerful and possibly even feminist woman looks like, and we know what a good homemaker and parent looks like, but we are still at a loss as to what happens when we combine her into one, celebrities aside. I could use a few more tips on how to be both.