I went to a crazy pre-work rave with a roomful of bankers and tech moguls, and it was almost too strange for words 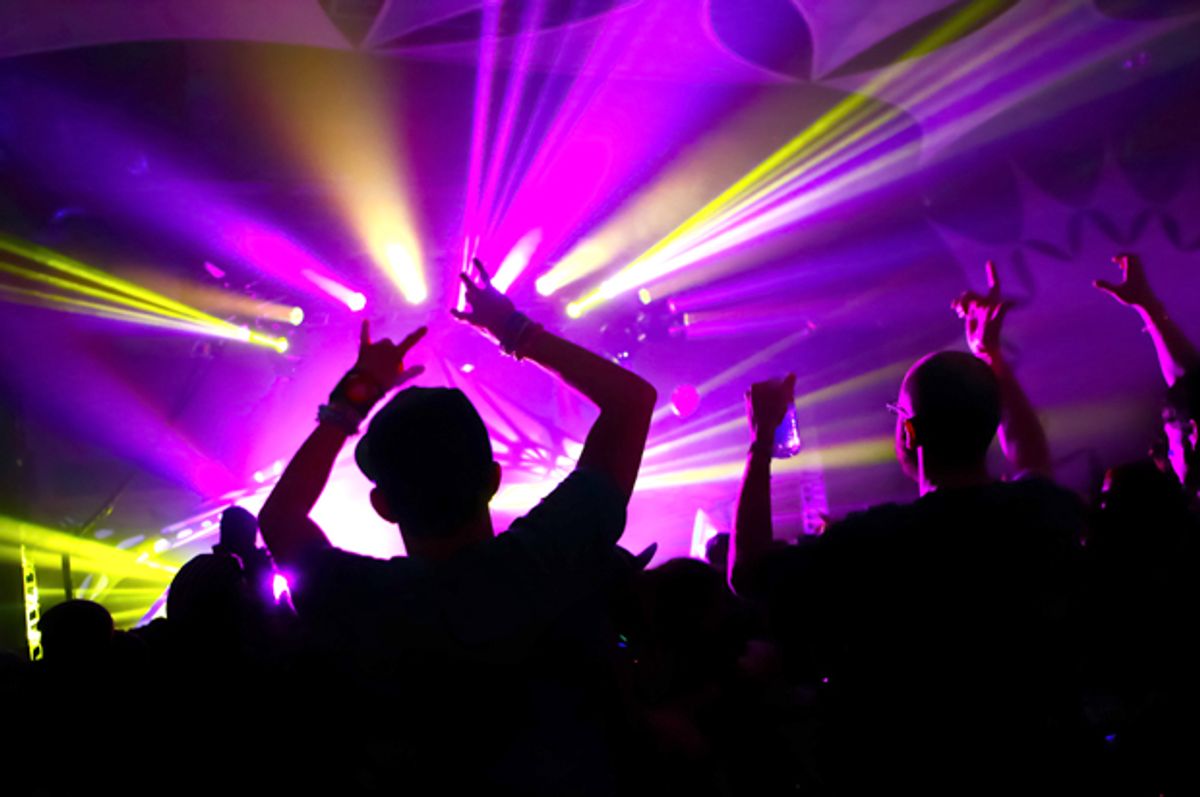 It’s 7:30 am on Tuesday morning and partygoers are tentatively sipping drinks from a bar lined not with cocktails but coffee, water, and caffeinated fruit juice. One guy in a T-shirt emblazoned with Will Ferrell’s face alongside the word “SWAG” sways by the bar. A towering porcelain-skinned Frenchman in a sheer blue sleeveless shirt and snug pink shorts from Buffalo Exchange leads a throng of dancers in day-glo sunglasses. At any given moment, at least 5 iPhones are in the air.

The Daybreaker dance party, which runs from 7 to 9 a.m. at different venues three times a month, has been steadily picking up hype since launching this past December. (London-based competitor Morning Gloryville began in 2013; the bash at 95 Delancey was the first since Daybreaker's successful San Francisco expansion.) The Times and the WSJ have covered Daybreaker. Colin Jost even poked fun at the parties on SNL’s Weekend Update.

For 20- and 30-somethings undeterred by the $25 price tag, Daybreaker offers a wholesome pre-work rager fueled by little more than house music and endorphins. The crowd is mostly decked out in workout gear or in the tech world’s non-uniform uniform of jeans and T-shirts. Chatting up attendees, you hear the word “energized” a lot. Tom Sikes, a Brooklyn musician whose band, Great Caesar, was playing at the event, tells me: “People are mostly just looking for ways to break the monotony, or at least the repetitiveness, of the NYC work week.” He readjusts his vintage Yankees hat. “I actually don't see it as vastly different,” he adds, “from going for a 7 am run before heading to the office.”

At Daybreaker, you are crammed into a glass box with hundreds of damp bodies: engineers, artists, Goolgers, Thiel Fellows, and even some forlorn bankers in sweat-drenched suits. Yesterday, the crowd included CodeAcademy founder Zac Sims and Union Square Ventures’ young analyst Brian Watson, who upon surveying the scene wiped the perspiration from his brow and shouted above the din: “ I never get up this early!”

The ticket price, I was told, is siphoned into expansion—ideally, spreading Daybreaker far as Tel Aviv and Berlin. The mission is more than mere party-throwing for young, smart creatives wielding tens of millions of potential investment dollars: it's about building an entire movement-- a community of like-minded people interested in wellness, self-expression, and breaking it down on the dance floor before 9 am.

“This is kind of awesome in a hilarious way,” says L.D. Libra, who moved to the city from Minnesota with the hopes of becoming a SWAT team officer but changed his mind once realizing the moral compromises New York cops had to make. (“Stop and frisk is a classic tool in totalitarian states to assert dominance.”)

Now he’s the CTO at Purposematch, a start-up that uses Jungian psychometric assessment to provide life recommendations. Libra sports a man bun and a long beard. His shirt, a tour schedule for Reddit founder Alexis Ohanian’s book “Without Their Permission,” leaves no doubt who today’s rock stars are (in the eyes of this crowd, at least).

Near the dance floor, a piece of plywood leans against an easel. An artist paints a red angel reaching skyward. He stops to take a selfie with the crowd in the background. “All the energy goes into the painting,” he tells me with preternatural David Lynchian calm.

It’s the millennial version of Warhol’s Studio 54, a place for freaks, artists and well-heeled types to mingle and dance semi-anonymously. It's like Burning Man stripped of drugs, bent on bringing the spirit of the festival and its attendant buzzwords (mindfulness, intention, purpose) out of the desert and into everyday American life.

“We take a lot of inspiration from those kinds of experiences where it brings people together in a really noncommercial way,” explained Radha Agrawal, who cofounded the event with Matt Brimer of General Assembly. She talks quickly and earnestly and calls everyone “babe.” As the founder of four startups, multi-tasking is her default setting. Before I lose her completely, she adds: “We want this to be a community venture.”

By 8 am we’ve reached the apex. The bass drops and the room tops out at over 500 people. I haven’t moved an inch in nearly ten minutes but the sweat flows freely and the dance floor literally shakes underfoot. Brimer, the calm yin to Agrawal’s frenetic yang, is conducting an interview with Germany’s largest TV station when suddenly a life-sized carrot bounds into the room, one of the mascots for SuperSprowtz, Agrawal’s nutrition startup endorsed by Michelle Obama. An eggplant (it’s Agrawal, suddenly in costume) and two phantasmal jellyfish follow close behind, undulating in time to the beat.

At last, people begin peeling off to go to work. Great Caesar brings the energy level back to Earth with a pathos-infused song about difference and acceptance. A young married couple visiting from Canada (he’s at a startup, she's in graphic design) slow-dances in the corner. Agrawal and Brimer offer thanks and a salutation, asking us to read in unison Teddy Roosevelt’s famous “man in the arena” quote (…“if he fails, at least he fails while daring greatly”) handed to us on Daybreaker-branded flashcards.

I, for one, was energized. Rather than take a cab I braved the quarter mile to the B train, the words of a great American ringing through my head as I returned to my apartment and promptly fell asleep.