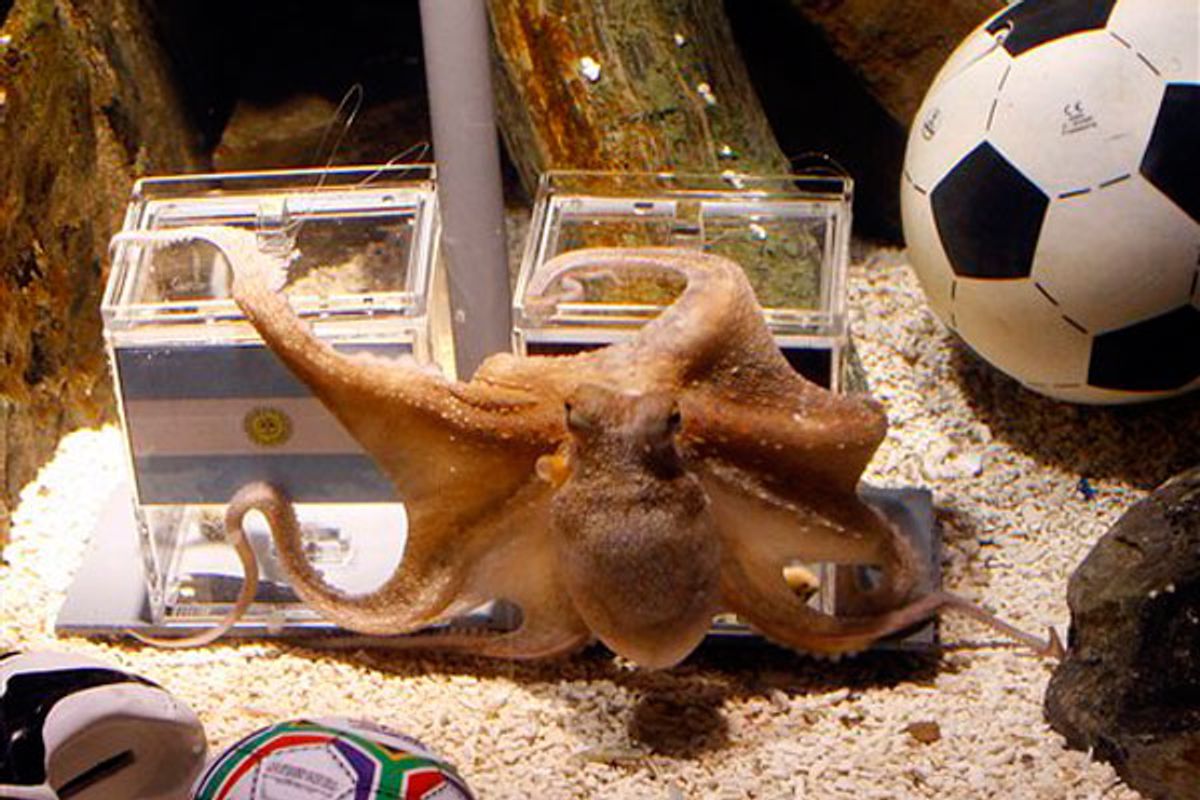 Paul the Octopus, whose extraordinary psychic abilities made him an international star in the 2010 World Cup, can rest in peace. Animal oracles around the world have taken on the mantle of predicting the winners of FIFA World Cup matches in Brazil.

From a clairvoyant kangaroo in Australia to a soothsaying sea turtle in Brazil, there is no shortage of animal tipsters sharing their predictions for the month-long tournament.

Paul's successors have had somewhat mixed results so far and punters would be wise not to take their divinations too seriously. Here are some of the animals and their mysterious ways for picking a winner.

The elephant, who reportedly made a name for herself as a soccer psychic during the 2006 Women’s World Cup, the 2010 World Cup and Euro 2012, makes her selection by kicking a ball into a goal at her home in Serengeti Park in Hanover, Germany. Nelly correctly predicted the US would defeat Ghana in their opening match. She expects Ghana to triumph over Germany on Saturday. Her keepers, of course, hope she is wrong.

This adorable marsupial at Australia Zoo picks the winner by selecting food from one of two bowls marked with national flags. Australia Zoo shares the eastern grey kangaroo’s predictions for the major matches on her Twitter account @predictaroo. Flopsy correctly picked Chile to defeat Australia, but was overly optimistic in her prediction for an Australian win over the Netherlands.

The camel sits in the Dubai desert between the flags of two competing teams and selects the winner by biting or nudging one of the flags. Shaheen got off to a good start, but has made some bad calls in recent days. Perhaps the sun is affecting the animal's judgment.

A Swiss guinea pig is also offering prophecies for World Cup matches. Madame Shiva, who is only focusing on Swiss games, is placed on a mini soccer field with the colors of two opposing teams at either end. She makes her forecast by pooing at one end of the pitch. She correctly called a Swiss victory over Ecuador in their opening match. Her skills will be tested again on Friday when her team takes on France. Madame Shiva has called a Swiss win. Given the performance of the rodents shown in the video above, betters might be wise to ignore her droppings.

Big Head, a 25-year-old male sea turtle at the Praia do Forte turtle sanctuary in Brazil, picks World Cup winners by eating a fish hanging from one of the flags of two rival teams. The loggerhead turtle can also predict a draw by eating the fish attached to a ball. Big Head correctly picked Brazil’s victory over Croatia in the opening game of the tournament, but wrongly forecast a Mexico win over the hosts on Tuesday.

Other animal oracles include prophesying penguins in England and psychic parrots in Brazil.

Baby pandas were also enlisted to make predictions during the World Cup, but Chinese officials changed their minds amid concerns the increased media attention would harm the health and safety of the endangered bears.