Starbucks' demented politics: Why its ballyhooed "college" offer helps them -- not you

With labor costs the mega-chain's biggest expenditure, here's its diabolical answer for how to retain staffers 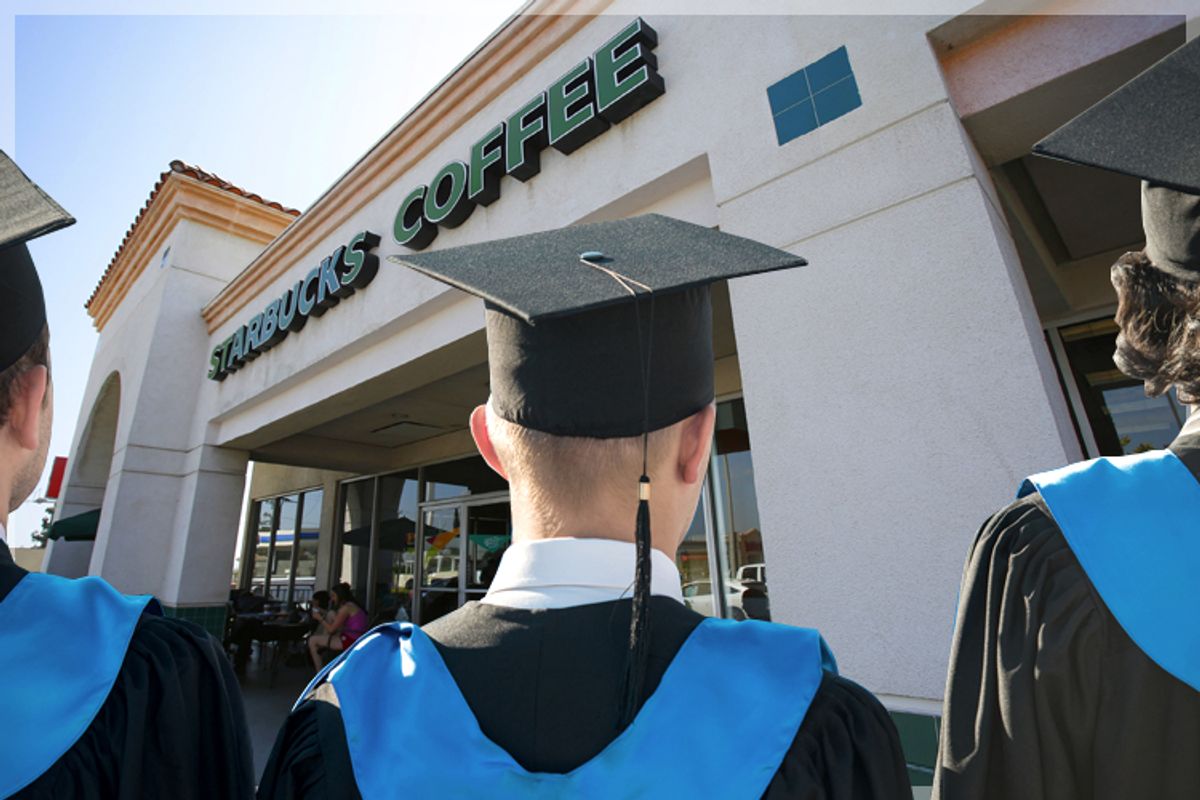 What if all our institutional problems could be solved by the people who caused them? What if President Obama put Hank Paulson in charge of regulating the banks, and he quickly implemented a litany of substantive reforms? What if the neocons who pushed us into the war in Iraq organized our second (third? fourth?) military adventure in the Fertile Crescent, but this time they brought on an era of lasting peace and democracy in the region? What if Exxon Mobil were charged with enacting a nationwide moratorium on fossil fuels, and in short order Americans had fully embraced renewables?

If such a state of affairs seems unlikely or highly naive, consider briefly the news that Starbucks will offer education assistance to roughly 135,000 eligible employees, who will now have the opportunity to complete unfinished degrees or enroll in college for the very first time. That's right, Starbucks -- the unofficial mascot of the "overeducated, underemployed" crisis in America -- is encouraging more of its staff to foam milk with a bachelor's degree, a little morsel of tragicomedy we won't examine too deeply here today.

By offering its employees access to online education, Starbucks joins a long list of U.S. corporations -- Amazon, Uber, Airbnb, Zappos, etc. -- eagerly exploiting the stress caused by our stagnant economy, what CEO Howard Schultz accurately described as the "fracturing of the American Dream." See, like much of the rest of the food service industry, Starbucks struggles with lightning-fast turnover. Offering tuition assistance -- contingent, of course, on continued employment -- is a fairly brilliant tactic to address this problem. Sharon Zackfia, an analyst for William Blair & Co. who studies the coffee brand, is quoted in an L.A. Times writeup noting that labor costs are the coffee chain's biggest expenditure: "'It's competitive at any level to get good talent. And [Starbucks'] belief is this is another benefit they could provide to ensure consistency and continuity in the level of service.'" The revelation that this initiative isn't actually intended solely to help workers shouldn't come as a surprise: the legal structure of most public corporations makes such altruism tacitly illegal.

Of course, Starbucks is hardly responsible for the state of the American economy, so perhaps their attempt to help employees gain an education without debt merits some measure of praise. But there's more going on here than the simple desire to help their staff: There's a cynical, free-market ideology at work, and it's hardly encouraging for the future of jobs or education in this country. Asking publicly traded companies to provide "market-based" solutions to the economic crises facing this country is akin to asking Bill Kristol to explain what went wrong in Iraq, or asking Lloyd Blankfein how we can better regulate the financial services industry -- which is to say, both criminally insane and completely uncontroversial.

This new initiative, billed the "Starbucks College Achievement Plan," and announced with much fanfare at a press release featuring Secretary of Education Arne Duncan, has been praised nearly universally in the press as a "bold act of 'conscious capitalism,'" "a potential game-changer," "generous" and "sweet." None of these glowing reports bothered to note that Starbucks is currently one of the largest employers of minimum wage workers in America, or that the benefits of online college are dubious at best, so it's hardly surprising that these writeups also fail to examine the underlying ideology at play. Put plainly, we cannot hope to fix a broken system within the confines of that very same system.

This is the essential lie of neoliberalism: the insane notion that the "rising tide" of capitalism can continue lifting indefinitely, without consequences for our ecology or our democracy. Groups governed by the ruthless precepts of free-market extremism cannot seriously be expected to provide solutions to the problems that their ideology might cause. And yet, more and more of us -- particularly younger Americans -- are abandoning political involvement in favor of attempting to change the system from within, to "vote with our wallets" and engage in "buycotts."  We applaud tepid, incremental changes, which always have the funny habit of placing the needs of capital above the needs of everyone else. Avowed liberals and leftists in the press frequently cheer superficial changes to EPA standards, tweaks to the private health insurance industry, an attempted minor adjustment to student loan interest rates, and really any other quasi-achievement that the Obama administration has managed to accomplish. These changes may be better than the hideous status quo, but their fundamental weakness is rooted in an unwillingness to address unbridled capitalism's foundational flaw.

Neoliberalism is intractable largely because it enriches the same people who should be its loudest critics. A whole class of elites have seen their fortunes and influence rise in tandem with the ideology of "capitalism for capitalism's sake." Meanwhile, the multi-pronged, decades-long attack on low-wage workers has been devastating (and by now, all too familiar) to most Americans: unions and labor dismantled; jobs outsourced; factories shuttered; small local businesses destroyed by big box stores ... all with the Gatsbian-backdrop of a rapidly expanding concentration of income, wealth and political power at the very top of American society.

So go ahead, cheer Starbucks if you must. But don't think that this new program -- or anything else in the pipeline of American politics -- will bring us any closer to solving the deeper, structural problems that strangle our economy and imperil our democracy. In the words of feminist poet and activist Audre Lorde, "The master's tools will never dismantle the master's house."